GIVE ME FREEDOM OF SPEECH
Image Comics to release LIBERTY COMICS 2010 in October, benefiting the CBLDF 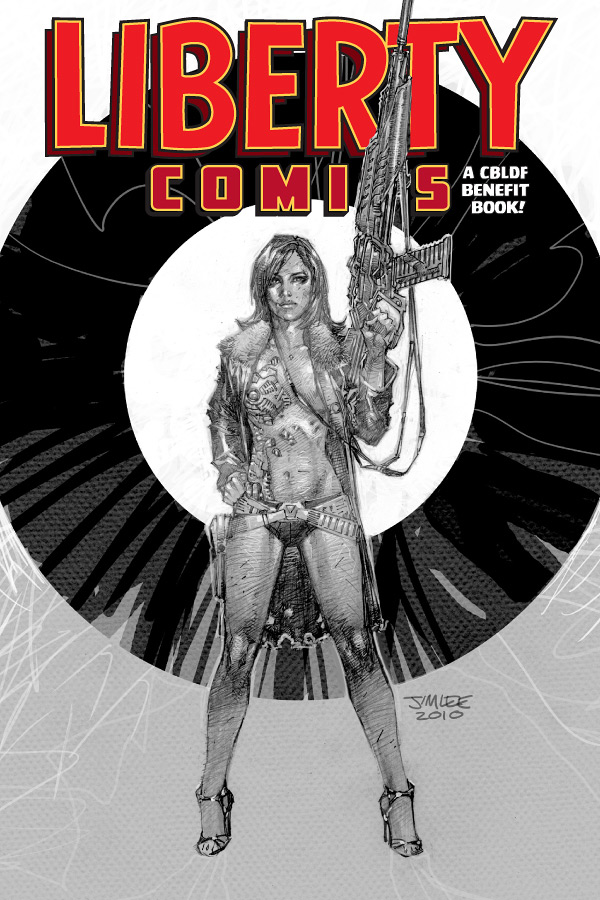 Berkeley, CA – 15 July 2010 – What do Frank Miller, Jeff Smith, Geoff Johns, Jim Lee and Image Comics have in common? They all support the Comic Book Legal Defense Fund, which protects your right to make, sell and read the comics you love. Image Comics is showing its continued support for the CBLDF with the publication of LIBERTY COMICS 2010 this October.
The CBLDF is a non-profit organization dedicated to the protection of the First Amendment rights of the comics art form and its community of retailers, creators, publishers, librarians and readers. The CBLDF provides legal referrals, representation, advice, assistance and education in furtherance of these goals.
LIBERTY COMICS is the annual ensemble of comic book greats, all of whom have donated their time and energy to support the CBLDF. With two issues published to date, LIBERTY COMICS has raised over $50,000 for the Fund.
LIBERTY COMICS 2010 will feature some of the best in the industry, including a new The Boys story by GARTH ENNIS & ROB STEEN, the first new Megaton Man adventure by DON SIMPSON in over a decade, an all-new Milk & Cheese story by EVAN DORKIN, a preview of The Contrarian by SCOTT MORSE, a new Conan tale by DARICK ROBERTSON, Boilerplate by ANINA BENNETT & PAUL GUINAN and “Why We Fight!” by LIBERTY COMICS editor LARRY MARDER.
LIBERTY COMICS will also feature all-new short stories and illustrations by GEOFF JOHNS & SCOTT KOLINS, FRANK MILLER, GABRIEL BÁ & FÁBIO MOON, PAUL POPE, JEFF SMITH, TERRY MOORE, DAVE GIBBONS, BRIAN AZZARELLO & JILL THOMPSON, ROB LIEFELD, COLLEEN DORAN and SKOTTIE YOUNG as well as all new covers by JIM LEE and DARICK ROBERTSON. Design for the entire package is contributed, as always, by Richard Starkings and John Roshell from Comicraft.
“The comics community would be at a great loss without the CBLDF around to protect our First Amendment rights,” says Marder. “LIBERTY COMICS is such a great way both creators and comics fans can show their support. Creators break into their busy schedules, donating their time and creativity. Fans can express their appreciation by purchasing LIBERTY COMICS from the CBLDF or from their favorite comics shop. I think this year’s LIBERTY COMICS will be the most diverse and cool issue yet!”
Adds Image Comics Publisher Eric Stephenson, “We’ve always been enthusiastic in our support for the CBLDF, but it’s both an honor and a pleasure to be involved with the many fine creators donating their talents to LIBERTY COMICS. Larry’s put together an outstanding book this year!”
LIBERTY COMICS 2010, a 48-page full-color comic book from Image Comics, will be available October 6, 2010. All proceeds from LIBERTY COMICS will benefit the First Amendment legal work of the Comic Book Legal Defense Fund!
Image Comics is a comic book and graphic novel publisher founded in 1992 by a collective of best-selling artists. Image has since gone on to become one of the largest comics publishers in the United States. Image currently has five partners: Robert Kirkman, Erik Larsen, Todd McFarlane, Marc Silvestri and Jim Valentino. It consists of four major houses: Todd McFarlane Productions, Top Cow Productions, Shadowline and Image Central. Image publishes comics and graphic novels in nearly every genre, sub-genre, and style imaginable. It offers science fiction, romance, horror, crime fiction, historical fiction, humor and more by the finest artists and writers working in the medium today. For more information, visit www.imagecomics.com.