GODZILLA® CONQUERS AGAIN
Godzilla®: Kingdom of Monsters #1 sells out in one day! 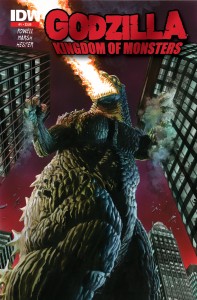 San Diego, CA (March 31, 2011) – IDW Publishing is pleased to announce that GODZILLA®: KINGDOM OF MONSTERS #1 has sold out just a day after making its debut at comic book retail stores throughout North America. Written by Eric Powell and Tracy Marsh, with artwork by Phil Hester, the rapid sell-out marks a fantastically successful return for the giant fire-breathing lizard to comics. To meet the continued demand and ensure fans everywhere have access to the comic,  GODZILLA®: KINGDOM OF MONSTERS #1 will be stomping its way back into stores in a ground-shaking second printing.

“We’re absolutely excited to see such a huge response to GODZILLA®: KINGDOM OF MONSTERS,” said Ted Adams, IDW Chief Executive Officer. “We thought a sell-out for the first issue might be in the cards, but selling out in one day exceeded even our own lofty expectations. We definitely feel a special second printing is in order, and we will be producing one as quickly as we can as a huge thanks to all the many retailers and fans who have supported us so tremendously in bringing the King of Monsters back to comics.”

The second printing of GODZILLA®: KINGDOM OF MONSTERS #1 will feature the Alex Ross illustrated cover from the first printing with a new foil logo. The reprint issues are slated to arrive at comic book retail stores on May 11, 2011.

“It’s immensely gratifying to see this kind of support for our Godzilla comic,” said Chris Ryall, IDW’s Chief Creative Officer. “It was already our largest print-run ever, so to have it sell out on the first day of release is a testament to a great retailer base and to very appreciated support from fans. We promise more and more monsters in the subsequent issues as repayment for your kindness.”

In GODZILLA®: KINGDOM OF MONSTERS, a full-scale apocalypse is brewing. The monsters are a force of nature whose attacks are as sudden and random as a lightning strike. There will be no clean-cut heroes with perfectly chiseled chins and capes billowing in the wind; only ordinary human beings struggling desperately to survive in a world gone mad.

GODZILLA®: KINGDOM OF MONSTERS #1 (2nd Printing – $3.99, 32 pages, full color) will be available in stores on May 11. Diamond order code FEB11 8245.
Visit IDWPublishing.com to learn more about the company and its top-selling books.
About IDW Publishing
IDW is an award-winning publisher of comic books, graphic novels and trade paperbacks, based in San Diego, California. Renowned for its diverse catalog of licensed and independent titles, IDW publishes some of the most successful and popular titles in the industry, including: Hasbro’s The Transformers and G.I. JOE, Paramount’s Star Trek; Toho’s Godzilla; the BBC’s Doctor Who; and comics and trade collections based on novels by worldwide bestselling author, James Patterson. IDW is also home to the Library of American Comics imprint, which publishes classic comic reprints; Yoe! Books, a partnership with Yoe! Studios; and is the print publisher for EA Comics.

IDW’s original horror series, 30 Days of Night, was launched as a major motion picture in October 2007 by Sony Pictures and was the #1 film in its first week of release. More information about the company can be found at IDWPublishing.com.
About TOHO CO., LTD.
Founded in 1932 and headquartered in Tokyo, Toho Company, Ltd. is one of the leading entertainment conglomerates in Japan. Toho is best known worldwide as the producer of twenty-eight Godzilla motion pictures, based upon a character the company unleashed on the world back in 1954, and masterpiece films directed by Akira Kurosawa. Toho has been the number one distributor of motion pictures in Japan (both domestic and foreign) for seven consecutive years since 2003.  The company is also, throughout Japan, the leading producer of theatrical works and one of the largest owners of office buildings and theaters.