Landmark SPAWN #200 sells out at distribution day of release, second printing on the way. 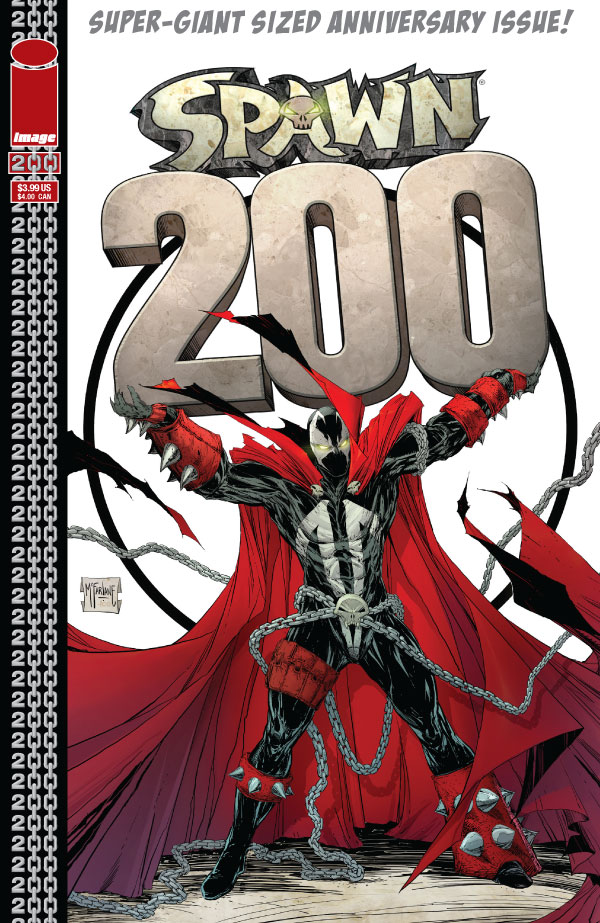 Berkeley, CA – 13 January 2011 – It’s an issue too large to contain — and an issue too hot to keep on shelves! SPAWN #200, the landmark issue of the top-selling independent comic of all time, has sold out at the distribution level!
Image Comics is rushing comics’ best value in years back to the presses. The second printing of SPAWN #200 will be in stores February 9, so mark your calendars if you missed the first printing!
“Obviously, it’s great to have any book you create sell out,” says creator Todd McFarlane, “but given the high initial orders of the first printing of SPAWN #200, combined with the fact that this is our big bicentennial issue, it only makes the sellout that much more rewarding. I’d like to thank both the fans and the store owners for making this possible.”
SPAWN celebrates its 200th issue in high fashion, with an all-star lineup: Greg Capullo (HAUNT, THE CREECH), David Finch (CYBERFORCE, Batman), Michael Golden (The ‘Nam, Micronauts) Jim Lee (All-Star Batman and Robin, Batman: Hush), Rob Liefeld (YOUNGBLOOD, Deadpool), Marc Silvestri (THE DARKNESS, CYBERFORCE), Danny Miki (SPAWN, Avengers) and Ashley Wood (HELLSPAWN, Zombies vs. Robots) all contributed to the issue. Robert Kirkman (THE WALKING DEAD, HAUNT) even wrote and penciled an origin story for Omega Spawn!
In this landmark issue, the most ruthless villain in the Spawn universe returns. Can Jim Downing survive a face-to-face confrontation? Downing will battle his most fearsome opponent yet and get answers from an astonishing source, as two fan-favorite characters make a glorious return in this double-sized issue.
SPAWN #200 Second Printing (DEC108009), a 56-page full-color comic book for only $3.99, will be in stores February 9, 2011.
Further, 2011 will be a big year for SPAWN: New series artist Szymon Kudranski and writer Will Carlton are already several issues ahead. Issues 201-205 will be coming out bi-weekly, to build on the momentum of the 200th issue. SPAWN 201 (JAN100417) will be in stores January 26; SPAWN 202 (FEB100348) will be in stores February 9; SPAWN 203 (NOV100471) will be in stores February 23; SPAWN 204 (DEC100493) will be in stores March 9; and SPAWN 205 (JAN110621) will be in stores March 23.
Image Comics is a comic book and graphic novel publisher founded in 1992 by a collective of best-selling artists. Image has since gone on to become one of the largest comics publishers in the United States. Image currently has five partners: Robert Kirkman, Erik Larsen, Todd McFarlane, Marc Silvestri and Jim Valentino. It consists of five major houses: Todd McFarlane Productions, Top Cow Productions, Shadowline, Skybound and Image Central. Image publishes comics and graphic novels in nearly every genre, sub-genre, and style imaginable. It offers science fiction, romance, horror, crime fiction, historical fiction, humor and more by the finest artists and writers working in the medium today. For more information, visit www.imagecomics.com.