The gang at TITAN BOOKS have sent us over their NYCC schedule, chock full o’ great stuff, super guests, and some mad-cool exclusives! Not to mention, Comics legend JOE SIMON celebrating his biography and 98th BIRTHDAY!!  If you’re hitting NYCC, be sure and check ’em out!

Joe Simon – celebrating his autobiography, My Life in Comics, and his 98th birthday! 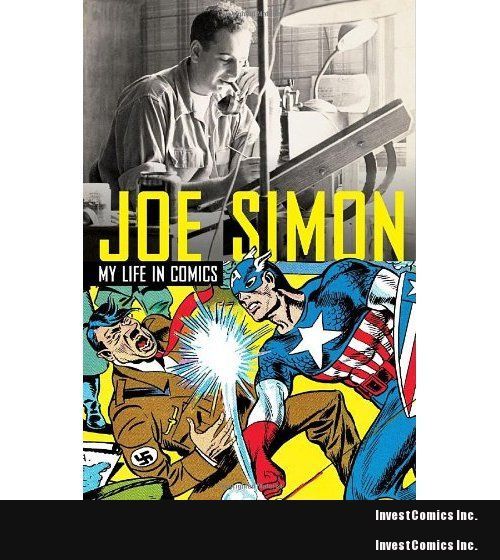 Comics legend Joe Simon will celebrate his 98th Birthday during the week of the Con and will appear on Friday in Room 1A23 at 3:45 – 4:45pm accompanied by his editor Steve Saffel for a panel on his autobiography, My Life in Comics.  He’ll then be at the Titan booth signing and meeting fans (Friday, Booth 940, 5:00 – 6:00pm). This will also be the first opportunity to pick up an advance copy of Simon and Kirby: Crime, the next volume in the critically acclaimed Simon and Kirby library collection! Also on-sale: two exclusive Fighting American T Shirt designs – available for sale only on Booth 940.

Fans of Roman Dirge will be thrilled to learn of his special appearance at the Con as a Spotlight Guest. He’ll be appearing on Saturday in Room 1A24 at 11:00am-12:00pm to discuss his new hardback of rare and previously unpublished artwork, entitled Taxidermied, but that’s not all.  He will also be signing books in the Autograph Area (Saturday, Autographing Table 8, 3:45-5:45pm).

Titan will have Roman’s latest Lenore T Shirts & mugs for sale on the booth.

Booth 940 will also be the place you can get hold of a Limited Edition of Drew Struzan’s new book Drew Struzan: Oeuvre. Struzan has created some of the most iconic movie poster images of the last 30 years, from Raiders of the Lost Ark to Star Wars: Episode III. With an Introduction by George Lucas, Oeuvre features over 300 pieces of art, including all of Drew’s most iconic movie images, as well as other highlights of his career, from album, book and comic book covers, to stamps, trading cards and original works. This sumptuous signed and numbered slipcased hardcover edition also comes with a signed and numbered art print.

Other Titan Exclusives Available at Booth 940!

In The Art of Sucker Punch, Zack Snyder (300 and Watchmen) guides you through the many amazing worlds and characters of his action-adventure epic. Pick up a copy with a new cover and specially designed bookplate illustrated by Alex Pardee and signed by Zack Snyder himself!

Booth 940 will also be where to find a copy of Tank Girl Skidmarks, signed by Alan Martin, and signed copies of the latest collection of Pat Mill’s Charley’s War! In this explosive eighth volume, Charley comes face to face with a young corporal who will eventually change the face of the world as leader of the Nazi party: Adolf Hitler.

You’ll be able to collect exclusive signed copies of Getting Off by crime fiction legend, Lawrence Block as well as Quarry’s Ex signed by Max Allan Collins on Hard Case Crime bookplates designed for the Con.

For fans of 60s cult espionage UK TV show THE AVENGERS, we’ll have an extremely limited number of pre-launch editions of our John Steed & Emma Peel T Shirts (officially debuting in December 2011).  Get them before they’re gone!

Comic-Con attendees can stop by Booth 940 and enter our draw to win a 16GB ipod Nano and $50 itunes voucher!