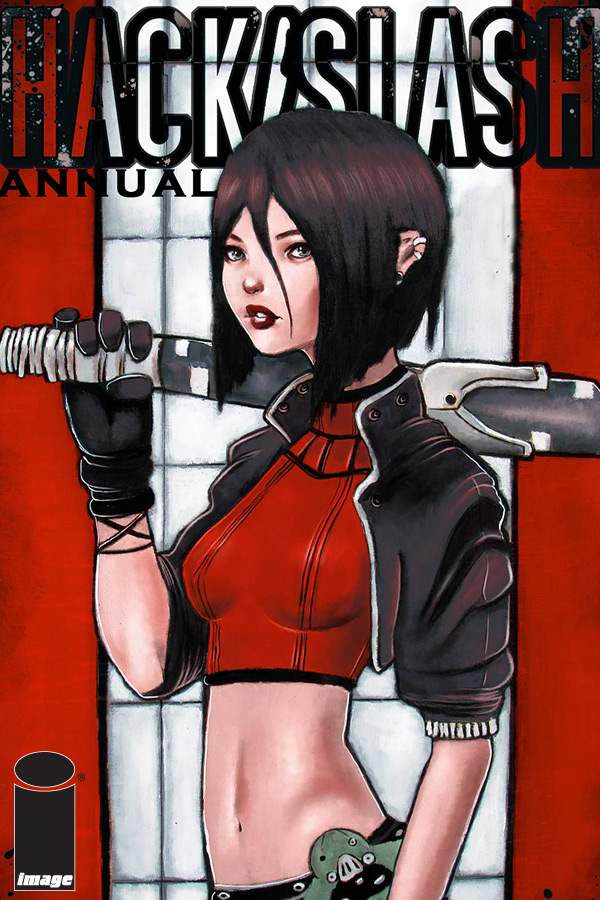 Berkeley, CA – 13 July 2010 – In October, Cassie Hack will face off against her biggest fan in HACK/SLASH ANNUAL 2010: MURDER MESSIAH. Written by Tim Seeley, with art by Jethro Moralles, MURDER MESSIAH connects the events of the previous Devil’s Due series with the new ongoing HACK/SLASH series that will launch from Image Comics in January 2011.
“When we started off at Image, I wanted to give everyone a fresh starting point,” says series creator Tim Seeley. “So, we did Hack/Slash: My First Maniac. But my intent was always to continue with the further adventures of Cassie and Vlad, and this annual will set up a great new status quo for the ongoing series!”
HACK/SLASH ANNUAL 2010: MURDER MESSIAH is the story that links the DDP series to the new Image Comics ongoing. Cassie’s biggest “fan” — a serial killer — is on a spree, cleaning up her loose ends. That means no foe or friend is safe. Meanwhile, 14 years in the future, in an America ruled by the Black Lamp Society, street-witch Liberty Lochs is on a desperate quest to find Six Sixx’s guitar…
HACK/SLASH ANNUAL 2010: MURDER MESSIAH, a 48-page full-color comic book for $5.99, will be available October 13, 2010. HACK/SLASH MY FIRST MANIAC #1 (of 4) Second Printing (MAY108016) and HACK/SLASH MY FIRST MANIAC #2 (of 4) (MAY100478/MAY100479), both 32-page full-color comic books for $3.50, are available now.
Image Comics is a comic book and graphic novel publisher founded in 1992 by a collective of best-selling artists. Image has since gone on to become one of the largest comics publishers in the United States. Image currently has five partners: Robert Kirkman, Erik Larsen, Todd McFarlane, Marc Silvestri and Jim Valentino. It consists of four major houses: Todd McFarlane Productions, Top Cow Productions, Shadowline and Image Central. Image publishes comics and graphic novels in nearly every genre, sub-genre, and style imaginable. It offers science fiction, romance, horror, crime fiction, historical fiction, humor and more by the finest artists and writers working in the medium today. For more information, visit www.imagecomics.com.