Berkeley, CA – 14 June 2011 –  A few days ago, USAToday announced that beginning with the 19th issue of HAUNT, Robert Kirkman and Greg Capullo will pass the torch to respected comics veterans Joe Casey (BUTCHER BAKER, THE RIGHTEOUS MAKER and GODLAND) and Nathan Fox (BLUE ESTATE, Florescent Black, and Pigeons From Hell). The pair, who previously collaborated on Marvel’s Dark Reign: Zodiac, are prepared to take Todd McFarlane’s HAUNT into even darker territory.

“Haunt is a great character and in the series Daniel and Kurt are really just getting started in the HAUNT legacy and folklore when Joe and I pick up in issue #19,” said Fox. “Artistically, I’m beyond excited to transition from where the creative team leaves off in issue #18 and then completely push HAUNT and the series to new extremes. Joe’s scripts and vision of where we’re headed is pretty rad to say the least, so for me, it is going to be an inspiring and happily busy monthly pace. Stay Tuned!” 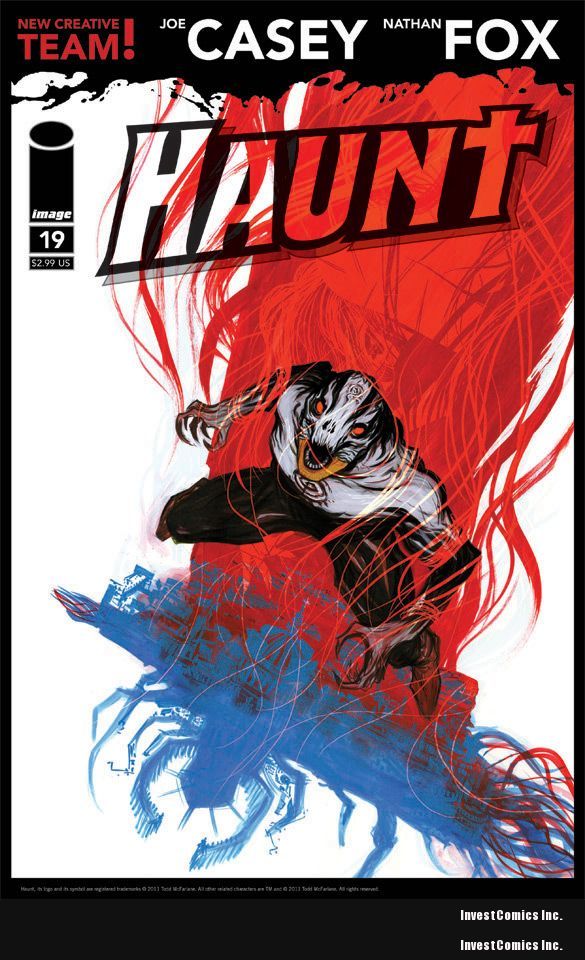 “Opportunities like this — to take over an existing property so early in its existence — don’t come around too often, and we’re going to take full advantage,” explained Casey. “Todd and Robert created some great characters in the Kilgore brothers and Nathan and I are locked and loaded to put them through hell.  So let the games begin…!”
Industry legend and Image Comics founder, McFarlane (SPAWN), who co-created the HAUNT series and will continue to play an editorial role, is confident that the new creative team are more than equal to the task of scaring up some fantastic new storytelling for the series.

“Filling the shoes of Robert Kirkman and Greg Capullo is a hard task, but I feel very fortunate that the new team coming on will keep the book flying high,” McFarlane commented. “I see it going down the pathway of the original Spawn book. Haunt is not going away.  It’s the second monthly book I’ve put out of my company in 20 years that I intend on seeing all the way through to the end.”
HAUNT began with a story of two brothers, Daniel Kilgore, a priest, and Kurt Kilgore, a dangerous secret agent. When Kurt was murdered, his spirit did not leave the mortal world as it should have, but continued to hover around his brother, speaking to him… haunting him. When Daniel himself was attacked, the sudden trauma led him to discover that his recently deceased brother could join with him to become something else… HAUNT.

There are two previously collected volumes of HAUNT, with more issues available monthly. HAUNT #19 (JUL110423), a 32-page full-color horror comic book for $2.99, is available for order in the July edition of the Diamond Previews catalog, and will be in a comic store near you in September.

Joe Casey is a founding partner of Man of Action Studios, a creative development company formed in 2000 by graphic novelists Joe Casey, Joe Kelly, Duncan Rouleau and Steven T. Seagle. Based in Los Angeles and New York, Man Of Action Studios created the popular BEN 10 TV franchise as well as the new series Generator Rex. Currently they are supervising producers/story editors on the upcoming Ultimate Spider-Man animated series premiering in 2012 on Disney/XD. Man of Action wrote the X-Men and Superman comic book series and currently publish their original creations through Image Comics. They wrote the best-selling video games X-Men: Legends for Activision, and Darksiders: Wrath of War for THQ. For more information, visit www.manofaction.tv.
ABOUT NATHAN FOX

Nathan Fox was born in 1975 in Washington D.C.. Raised from the age of five on the suburban outskirts of Houston, an early addiction to Cartoons, Commercials and Video Games led to a lifelong exploration of Narrative Art and the over-stimulation associated with his generation.  In the hopes of making such an addiction his full time job, Nathan left Texas for Missouri where he attended the Kansas City Art Institute. What followed over the next four years can only be described as an eye opening experience compared to the somewhat quiet Southern upbringing. The discovery of Anime, Yoshitoshi’s Yukiyo-e Prints, Sideshows and Comics would lead him down the happily twisted path he still follows today. After graduating from the Kansas City Art Institute in 1997, Nathan pursued Illustration from Milwaukee, Wisconsin for the next two years with little result. Frustrated with pursuing editorial illustration and working as an offset pressman, he and his wife moved to New York City in 2000 where Nathan attended The School of Visual Arts Illustration As Visual Essay Graduate Program. Those two years of graduate study would prove to be the most fruitful as Nathan has been freelancing full time as an illustrator and storyteller ever since. His work has appeared in The New York Times Newspaper and Magazine, Interview, The New Yorker, Rolling Stone, Wired, ESPN Magazine, Print, Entertainment Weekly, Mother Jones, Spin, Mad Magazine, MTV Store Windows and Tshirts, Burton US Open 2009, Instant Winner and REAL Skateboards, DC Comics, Vertigo, Dark Horse Comics, Marvel and many other publications and mediums. Future projects include pursuing Comics, Narrative Illustration and Gallery Work. For further information, updates and samples of Nathan’s illustration work, Comics, Murals, Skate Decks and more, visit www.foxnathan.com on the World Wide Web.
ABOUT TODD MCFARLANE PRODUCTIONS

Todd McFarlane Productions is the company behind the monthly comic book Spawn. Created by Todd McFarlane, Spawn debuted in May 1992, selling 1.7 million copies, making it the bestselling independent comic book of all time. Spawn is published in nine languages and distributed in more than 32 countries. Currently, TMP releases the long-running Spawn monthly comic now in its 19th year. Other TMP titles include Haunt, Hellspawn, and Sam & Twitch. To find out more about product coming out of TMP, visit www.spawn.com.