The third installment of the digital-only issue for the HAWKEN: GENESIS series available exclusively through comiXology on Jan. 16, 2013

This exclusive short story is available across comiXology’s entire digital comics platform including the iPhone, iPad, Android, Kindle Fire, and the Web. “No Witness So Dreadful” features story and cover by the game’s creator and creative director, Khang Le, with illustration by Hoang Nguyen and Kinsun Loh (Carbon Grey). It can be accessed through comiXology via this link: http://www.comixology.com/Hawken-Genesis-3/digital-comic/DIG002883.

HAWKEN is a free-to-play multiplayer mech first-person shooter developed by Adhesive Games and published by Meteor Entertainment. HAWKEN entered Open Beta on December 12, 2012 (12.12.12). HAWKEN creates an intense and enjoyable battle experience that captures the feeling of piloting a heavy war machine while keeping the action fast-paced and strategic. HAWKEN brings the quality of a AAA title to the free-to-play sector. HAWKEN has been called one of the most anticipated games of 2012, winning more than 22 press awards at industry events. For more information, visit http://www.playhawken.com. 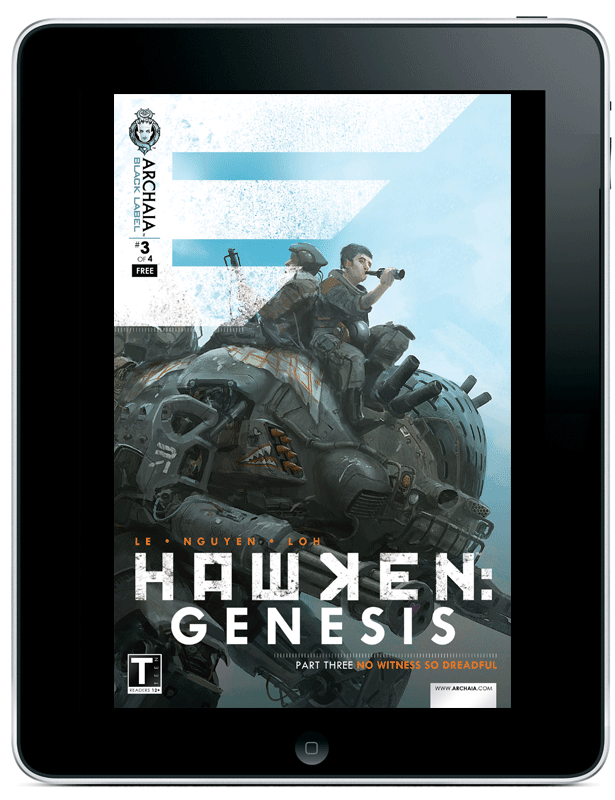 About Archaia Entertainment, LLC Archaia is a multi-award-winning graphic novel publisher with more than 75 renowned publishing brands, including such domestic and international hits as Mouse Guard, Jim Henson’s Tale of Sand, Return of the Dapper Men, Rust, Bolivar, Gunnerkrigg Court, Old City Blues, Awakening, The Killer, Tumor, Syndrome, Artesia, and an entire line of The Jim Henson Company graphic novels such as The Dark Crystal, The Storyteller, and Fraggle Rock. Archaia has built an unparalleled reputation for producing meaningful content that perpetually transforms minds, building one of the industry’s most visually stunning and eclectic slates of graphic novels. Archaia was named Graphic Novel Publisher of the Year by Ain’t it Cool News, Comic Related, and Graphic Policy, which honored the publisher two years in a row. Archaia was honored with nine 2011 Eisner Awards nominations and two Awards for Best Graphic Album and Best Anthology. In 2012, Archaia has been further honored with six Harvey Award nominations, two Harvey Awards, six Eisner nominations and three Eisner Awards, and both Gold and Silver awards from ForeWord Reviews. In addition to publications, Archaia has successfully emerged as a prolific storyteller in all facets of the entertainment industry, extending their popular brands into film, television, gaming, and branded digital media. For more information, visit the Archaia website at www.archaia.com.

About comiXology Founded in 2007 with the mission of bringing comics to people everywhere, comiXology has revolutionized the comic book and graphic novel world. With the development of the comiXology digital comics platform—with buy-once, read-anywhere availability across iPhone, iPad, Android, Kindle Fire, Windows 8 and the Web—comiXology provides the easiest way worldwide for people to enjoy comics anywhere they happen to be! Regularly ranking as the top grossing iPad app in the entire iTunes App Store, comiXology is one of the leading drivers of the iPad economy. Providing the most digital comics on the most devices, comiXology will not stop until everyone on the face of the planet has been turned into a comic book fan.