The Future of Marvel NOW! Is THANOS RISING!

Superstars Jason Aaron & Simone Bianchi Tell The Story Behind The Son Of Titan! 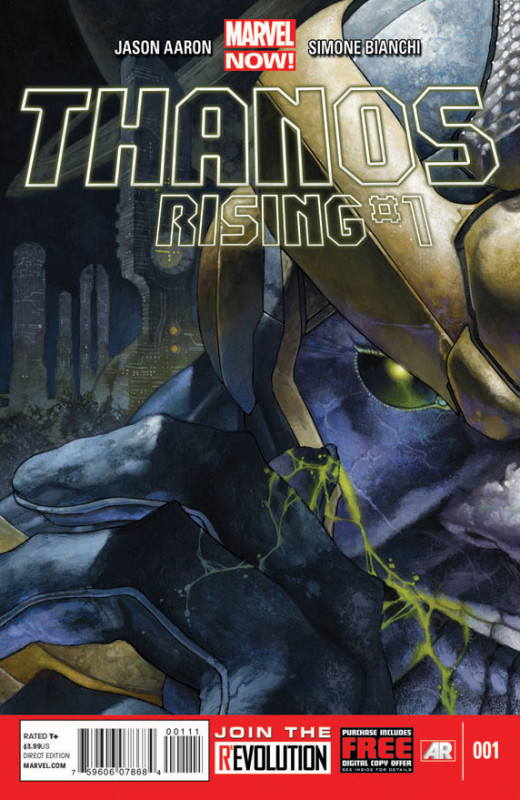 New York. NY—January 16th, 2013— This April, the true origin behind the most villainous force of the year is revealed inThanos Rising #1, kicking offthe all-new limited series from the blockbuster creative team of writer Jason Aaron (Thor: God Of Thunder) and artist Simone Bianchi (Wolverine)!As part ofMarvel NOW!, Thanos Rising joins a number of titles that will take the Marvel Universe in an exciting all-new direction, as the industry’s top creators join the top Super Villains to deliver all-new series, great for new and veteran readers alike!

Prepare for a visceral tale of tragedy, deceit and destiny like you’ve never seen before as readers dive into the shrouded history of the most talked about villain of the Marvel Universe. Who is Thanos, and where did this demi-god of death and destruction come from? And how does this story set up one of the biggest events in Marvel history?

“The story of Thanos’ rise to power would make Shakespeare shudder,” said Axel Alonso, Editor in Chief, Marvel Entertainment.  “The epic saga of a young boy, born in blood on a planet far, far away, who grows to become one of the most powerful and terrifying forces in the Marvel Universe, ‘Thanos Rising’ takes a cold, hard look at the eternal question: Are some people just born evil?’

“This is without a doubt one of the creepiest stories I’ve ever gotten to write for Marvel. It’s the origin of an outer space serial killer, the story of the universe’s weirdest romance and a grand cosmic tragedy, all wrapped up in one,” explained writer Jason Aaron. “This is me taking five issues to really dig into the head of a space-faring world conqueror, mass murderer and hopeless romantic. I love writing stories with villains as the main character, and this book is about Thanos all the way.”

Each issue ofThanos Rising includes a code for a free digital copy on the Marvel Comics app for iOS and Android devices. Additionally, each issue of Thanos Rising features special augmented reality content available exclusive through theMarvel AR app– including cover recaps, behind the scenes features and more that add value to your reading experience at no additional cost.

This April, Jason Aaron and Simone Bianchi redefine what it means to be mad inThanos Rising #1!