Skottie Young baby variant covers have become a natural regular event to promote every single new Marvel #1 for years now. Lets look back at the history of these as these have proven extremely popular. 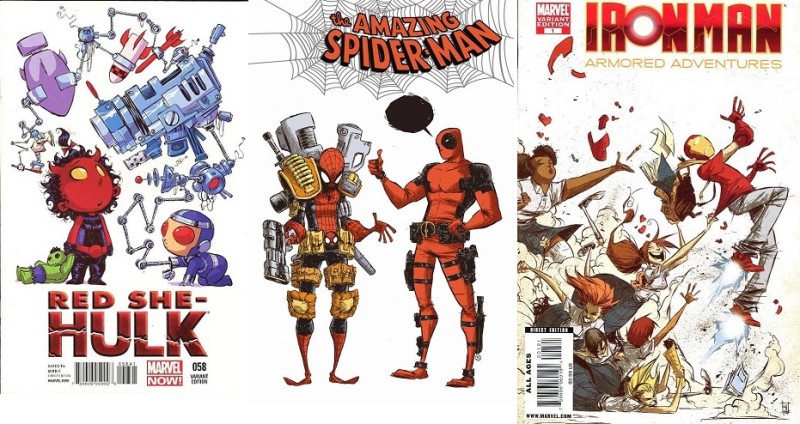 The first Young variant cover was for his popular run of Wizard Of Oz related comics from Marvel back in February 2009. However the official baby theme has not started yet. 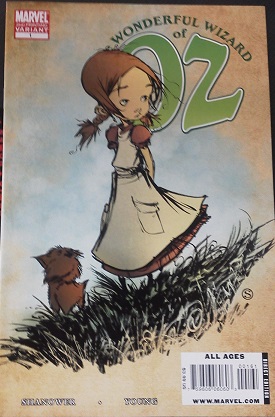 In July 2009 Young was hired for this all ages title.
IRON MAN ARMORED ADVENTURES YOUNG VAR – MARVEL COMICS
(W/A) Various (CA) Skottie Young Variant Cover by SKOTTIE YOUNG
From the new hit show on Nicktoons Network comes Iron Man Armored Adventures! After a tragic airplane crash, 16-year-old Tony Stark’s loses his father and is so injured that he must use his dad’s repulsor technology to keep himself alive. In the aftermath, Tony also discovers a prototype for the IRON MAN suit, and donning it, Iron Man resolves to fight the enemies of World Peace! Fortunately, he has the help of Jim Rhodes and Pepper Potts, because in addition to trying to save the world he also has to deal with one of the most formidable forces in the known universe: HIGH SCHOOL! 40 PGS./All Ages …$3.99 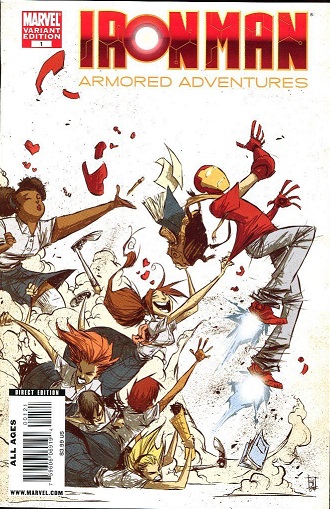 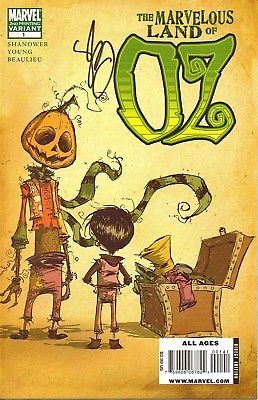 Perhaps Young’s claim to fame came with his cover for both printings of Amazing Spider-man #611 featuring both Spider-man and Deadpool. This title regularly selling at $30.00

AMAZING SPIDER-MAN #611 2ND PTG YOUNG VAR (PP #896) MARVEL COMICS
(W) Joe Kelly (A) Eric Canete (CA) Skottie Young by Joe Kelly & Eric Canete; variant cover by Skottie Young
From Marvel Comics. Deadpool-Man, Deadpool-Man – does whatever a Deadpool can…spins a web any size – but not really…Deadpool’s don’t have webs. Look out! Here comes the Deadpool-Man! What force on Earth has brought the Merc with a Mouth and the Web-headed Wonder closer together than Quesada and Twitter? And how does it tie to the upcoming Spider story “The Gauntlet”?! And finally – Who is Lady Stilt-Man?! Joe Kelly (Deadpool Classic; This issue of Amazing Spider-Man) and Eric Canete (Iron Man: Enter The Mandarin) bring you 2079’s top Marvel Comic of the last 70 years (sorry, Dazzler #500)! Scheduled to ship 12/23/09. (161) 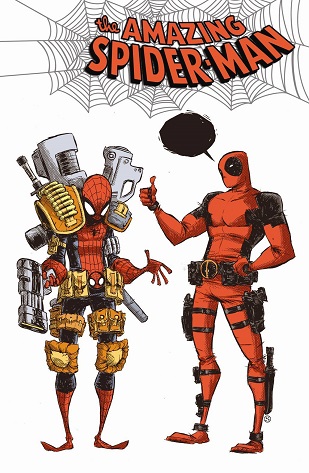 LOCKJAW AND PET AVENGERS UNLEASHED #4 (OF 4) YOUNG VAR MARVEL COMICS
(W) Chris Eliopoulos (A) Ig Guara (CA) Skottie Young
Written by CHRIS ELIOPOULOS Pencils & Cover by IG GUARA Variant by SKOTTIE YOUNG
WHO IS THE GOLDEN ONE? The answer may mean the destruction of the Pet Avengers. Will the team make the ultimate sacrifice to save their friends’ world? Find out in the action-stuffed finale by Eisner-nominated CHRIS ELIOPOULOS and fan favorite artist IG GUARA! 32 PGS./All Ages …$2.99

At this point the popularity of Young was proven and he was hired regularly from this point to do variant covers and did a series of Deadpool variants in 2011.

DEADPOOL CORPS #12 YOUNG VAR MARVEL COMICS
(W) Victor Gischler (A) Marat Mychaels (CA) Skottie Young
Written by Victor Gischler Penciled by Marat MYCHAELS Cover by Rob Liefeld Variant Cover by Skottie young
“YOU SAY YOU WANT A REVOLUTION,” PART 6 The revolution is over and the fate of the Krook people is now in their own hands, but what of the fate of the Deadpool Corps? As they try to escape with their tons of ill-gotten booty, the very fate of the Corps itself is in the balance. The scintillating conclusion to the Space Family Wilson’s adventures across the far-flung cosmos. 32 PGS./Parental Advisory

Deadpool Team Up #883 shows some of the first leanings towards the childlike superhero versions he has become known for in early 2011. 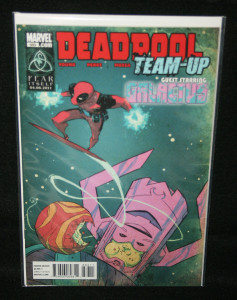 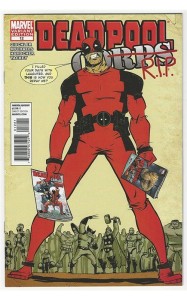 Before Guardians Of The Galaxy fever caught on Young did his first Rocket Raccoon and Groot cover.

ANNIHILATORS #4 (OF 4) YOUNG VAR MARVEL COMICS
(W) Dan Abnett, Andy Lanning (A) Timothy Green, Tan Eng Huat (CA) Skottie Young
Written by DAN ABNETT & ANDY LANNING Penciled by TAN ENG HUAT & TIMOTHY GREEN II Cover by ALEX GARNER
Variant Cover by SKOTTIE YOUNG TWO AWESOME STORIES IN ONE COSMIC BOOK! This is it: the galaxy’s
most powerful squad and most beloved duo face their fiery finales! First, the Annihilators must prove they are the ace team of universal protectors that Star-Lord dreamed they could be…or perish in the attempt! Meanwhile, Rocket Raccoon and Groot face the horrible, reality-twisting menace – who has a key connection to Rocket’s secret past – that lurks in the heart of the Half-World Asylum! Want to show the House of Ideas that you want more Marvel Cosmic? Spread the word and buy this issue! 48 PGS./Rated T+ 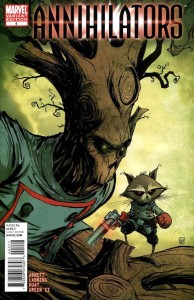 His destiny would be set in October 2012 with the creation of his first BABY cover.
RED SHE-HULK #58 YOUNG VAR NOW MARVEL COMICS
(W) Jeff Parker (A) Carlo Pagulayan, Wellington Alves (CA) Skottie Young
From Marvel Comics. All-new ongoing! The Earth’s strongest female set on a path of destruction!!! Her enemies? Every powered being in the Marvel Universe!!! NOTE: Supplies limited. Consult your retailer for availability. Scheduled to ship 10/03/12. 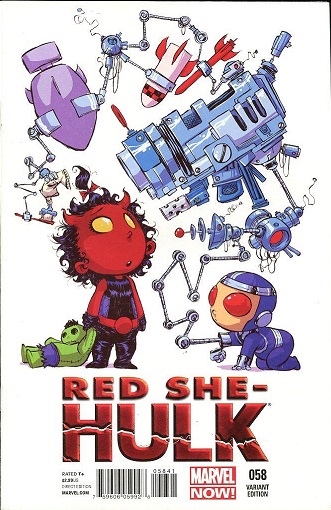 From this point on the series of baby young covers would be constantly released.
October 10th 2012 is the date of the first of over hundred different #1 Young baby variant covers.

UNCANNY AVENGERS #1 YOUNG VAR NOW MARVEL COMICS
(W) Rick Remender (A) Cassaday (CA) Skottie Young
THIS IS IT! The greatest era of the Marvel Universe starts here! From the ashes of AvX an all-new, all-different Avengers assemble! Dive headfirst into Marvel NOW! as the superstar dream team of Rick Remender (Uncanny X-Force, Venom) and John Cassaday (Astonishing X-Men, Captain America) deliver high stakes action in UNCANNY AVENGERS #1 – sporting a jaw-dropping cover by Cassaday! No fan can miss the blockbuster debut of an all-new Avengers team featuring members from all across the Marvel Universe…a team uniting Avenger and X-Man alike! Captain America begins his quest to create a sanctioned Avengers unit comprised of Avengers and X-Men, humans and mutants working together – so why is Professor Xavier’s dream more at risk than ever?
The funeral of one of Marvel’s greatest heroes! The first attack of the most loathsome villain in history will quake the Marvel Universe forever! But following the devastating events of Avengers VS X-Men, can Captain America pull together a team that can get along for its first mission? 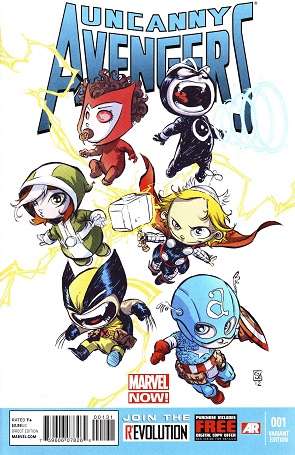 Since these have been popular almost since day 1 they will always be sought out by collectors. They are fun!
Almost all Young variants are ordered to a specific initial order print run guaranteeing that they almost always sell out even before their release date. That doesn’t make these rare but does make them some what limited. So far not many have shown much price increase but there are definitely collectors who seek these out. Its only time before collectors start to collect sets of these and hunt out the best covers.

There is a Young #1 variant released almost every week of the year now from Marvel.  Even the three recent Star wars series had connecting covers that make one gigantic Young baby picture of young versions of all the Star Wars characters.