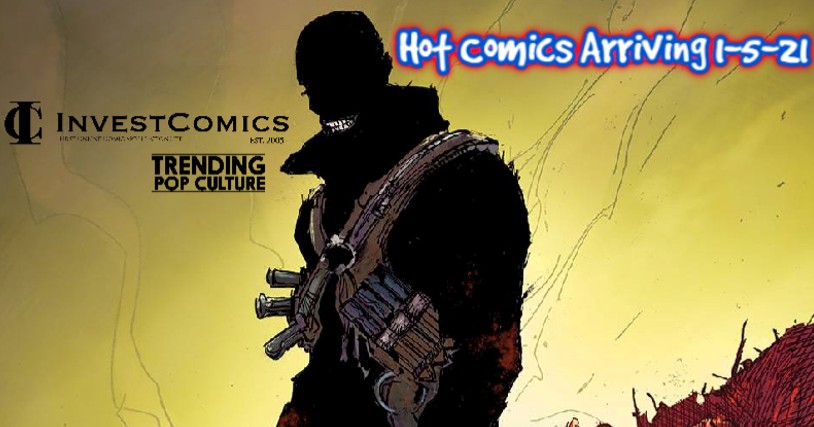 InvestComics/Trending Pop Culture; SINCE 2005.
Here are this week’s top Trending/Spec Comics out this Wednesday 1-5-22.
Please note: All new comic releases can and will change release dates from time to time. Check with your local comic shop on the guarantee of arrival time. If ordering from eBay, check with the seller or post details.
Click on ALL Red-Highlighted LINKS/Comic Covers to BUY/BID from ALL available eBay sellers.

X-Men #6 – Marvel will be starting off the new year with a bang regarding their X-Men title. Both for the reader and the speculator. A new character is introduced; Captain Krakoa. There he is right on the cover too. The cell phones are out taking pictures of him. Will this character pan out though? One plus is having writer Gerry Duggan at the helm along with artist Pepe Larraz. It’s a wait-and-see here, but definitely a pick-up on Wednesday.
Nocterra Special #1 – This special issue is a major origin issue. Writer Scott Snyder doing his thing here with artist Denys Cowan.
Darkhold Omega #1 – It’s one day into 2022 and already Marvel is cranking that hype machine. They claim this issue contains an introduction of a hero that “will take the Marvel Universe by storm!” Sounds like a bit of catering and pandering to the speculative side here, but Marvel is well aware of that out-of-control modern market. And just like the X-Men book forthcoming, it’s a wait and see here. Writer Steve Orlando will bring the story as he always does and Cian Tormey will do his art thing, so this again is a plus.

Dark Knights Of Steel #3 – The following text ahead is all based on the speculative side of things. As each issue arrives, we keep explaining that there is a new DC Universe being created here. New DC characters are becoming “Knighted” every issue and they look badass with swords. How far will the new DC Knighted series go? Who knows really? The way this upside-down modern market is these days, all it takes is a dope Knighted Joker cover by Jock and we’ll be off to the races. Be on guard modern spec collectors.
Detective Comics #1047 – A 12 part weekly Detective Comics story will begin here. “The Tower”
Elektra Black White & Blood #1 – Elektra is one of the best Marvel characters that seems to never get her due at times. She does and then she doesn’t. It’s a very odd relationship between fans and Marvel’s elite assassin. Well, this week we receive top creative talents lending to the obvious lure Elektra does in fact bring. She’s a total badass (third time using that “badass” word this week. A new record!) and comic fans will be treated here with great writing and art, so enjoy a possible precursor to Elektra’s own solo series eventually coming out in 2022.
Inferno #4 – There are X-Men writer’s and then there are X-MEN WRITER’S. Chris Claremont is the legendary X-Men writer and then there is this guy, the modern-day Chris Claremont X writer; Jonathan Hickman. If you are a frequent flier around InvestComics, you will know we’ve spoken about Jonathan Hickman extensively many times relating to his X-Men stories. He single-handedly has created the new X-Men universe and writers will probably (should) follow his lead. The Inferno issue arriving this Wednesday is to be his last X book, but we all know it really isn’t. Good try Marvel. We’ll probably see Marvel slinging out a new regular X-Men series written by non-other than Mr. Jonathan Hickman, but until then, we’ll play along here.
Captain Marvel #35 – Marvel says this will be the biggest expansion of the Captain Marvel universe in like….ever. Spoiler alert coming up………the secret cover has Binary on it and it looks amazing!

Spawn #325 – The Spawn comics are still a hot item. The new villain SINN is still making his way through the series as readers learn more about him. The Spawn character himself is set for a big reveal in this issue. Todd McFarlane is writing.
Shang-Chi #7 – Learn the secrets of Shang-Chi’s mother.
Black Widow #13 – Marvel claims this is the biggest fight ever recorded on paper for our beloved Natasha. Lots of fist flying, kicking, body slamming, blood, lord knows what else is in store. Oh yes, Marvel says Natasha loses this one too. Makes us want to read it less, no? Maybe not.
Batman #119 – Batman battles the newest villain in his rouge gallery, Abyss.
Bylines In Blood #1 – New series from AfterShock Comics. Writers Erica Schultz and Van Jensen. Artist Aneke.
Pantha #1 – A new series from Dynamite Entertainment.

Click the InvestComics banner above and check out all of the First Appearance comics available on eBay.