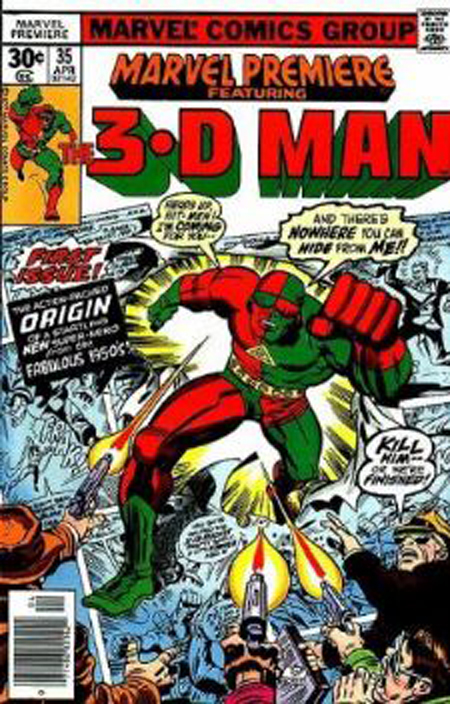 Marvel Invasion brings us back to 1977!

Way back in 1977 the comic world was introduced to an unusual Marvel hero named 3D-Man. Our hero was created by none other than the famous Roy Thomas. His powers as his name might suggest is that of a man 3 times the normal strength of man. Oh yes, we almost forgot one of his better attributes. He can peg out any Skrull no matter what form they may be in. Hmmmm…..I bet you know where this is going.

3D-Man is set to play either a vital or a MAJOR role in the Secret Invasion saga. In this upcoming week we get introduced to the NEW 3D-Man in Avengers: The Initiative # 12.

So here’s the deal. You can pick up the new comic on Wednesday, but also pick up 3D’s first appearance on Ebay for only $2 – $4 more. Yes, you can pick up Marvel Premiere # 35 for MEGA cheap……for now? InvestComics just picked up a NM copy from Mile high comics for $7. And yes that is with shipping. We spent the extra couple of dollars to ensure that we are going to get guaranteed quality. Otherwise you can pick this comic up on Ebay for $2.

This weeks pick falls into the no-brainer category. A first appearance from 1977 from Roy Thomas of a character that might be playing a Major role in the new Marvel hit for a price tag of $2 is an easy affordable deal.