Marvel Comics brings it this week with the much anticipated and hyped Ultimatum and the much under-hyped Blue Marvel. Blue Marvel looks to be an extremely interesting story as well as nice eye candy. Ultimatum will be a good storyline (we hope) that will tighten up the Ultimate Universe. The Ultimate Universe will be brought to new heights and Marvel Blue will debut in the same week. Sounds like a good Marvel week to me. Click above to see what else to look for this week……….

Ultimatum #1  “This series changes everything”. A quote that seems to have very little validity these days, but as always (especially with Marvel) I’m in! Marvel puts the whole Ultimate Universe on it’s butt and is taking a major character down for the dirt nap. The Ultimate Universe could use a kick in the nads and this just might be the series that does it. Get the white variant cover and hold onto this comic when this series really starts heating up, then dump it. You’ll be able to get back that variant a year from now for a third of the price.

Adam: Legend of the Blue Marvel #1  Now here’s an interesting character that will fly right under the radar on Wednesday. While fans flock to get the Ultimatum, the INTODUCTION of a new Marvel character is coming out, in a number one issue no less. Tony Stark finds the only man to ever defeat Anti-Man, Going back into time he gets Blue Marvel! This character not only looks bad ass, but is going to kick some ass in New York City and in sales. Get this quickly or buy the second print in a few weeks!

Savage Dragon #139 The Dragon teams up with Invincible this week.

X-Men Spider-Man # 1  This is the ‘new’ retelling? Of Spider-Man meeting up with the X-Men for the first time that spans from yesteryear and brings you right up until today. This 4 part gem seems like it would be a good read.

A small week indeed…..This would be a perfect time to go to those back issue bins and find yourself some treasures. Look for those Bronze age comics; obscure first appearances, first work by writer/artist, death issues, origin issues, number one issues, buy it all up while  they are still very affordable and becoming scarcer.

I’ll leave you with the Bronze Age pick of the week. Iron Man #55, first appearance of Thanos. Buy this, read it, love it and hold on to it. 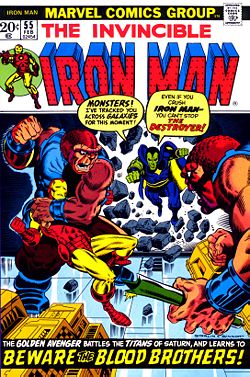