ONE MORE MEDIUM FOR THE “KING OF ALL MEDIA” 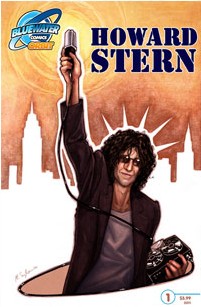 He changed the face and tone of radio for a raw, edgier generation and then set his sites on TV, movies, books and satellite broadcasting. Howard Stern, the pioneering “shock jock” and self-proclaimed “king of all media” was selected as the first subject to be featured in Bluewater Productions’ latest biography comic title “Orbit.”

“Orbit: Howard Stern” lifts the veil on the man behind the microphone by examining his rise to fame, his assault on the status quo of broadcasting, his over-the-top, sometimes crude persona and his ground breaking move to satellite radio.

“Orbit,” according to Bluewater president Darren Davis is a natural extension of the biography comic division established by Bluewater’s “Female Force,” “Fame,” and “Political Power.”