CREATOR OF BARBIE REVEALS DARKER SIDE OF ICONIC CREATION 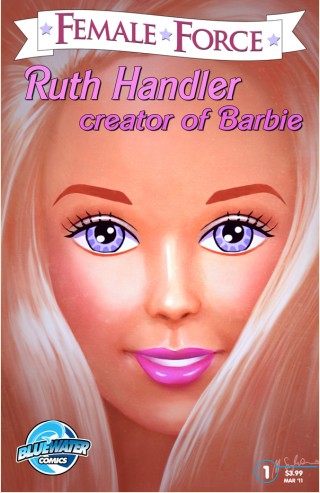 Every girl has one. It is one of the best selling and most enduring toys of all time, and despite being made of plastic and only 7” inches high, Barbie is one of the greatest “female forces” of the last half century. That’s why Barbie and her creator Ruth Handler are the subjects of an upcoming Bluewater Productions biography comic title.

Scheduled for a March 2011 release, “Female Force: Ruth Handler, the Creator of Barbie” follows the creation and impact of one of the most iconic and influential toys ever designed and marketed. It examines the life and legacy of its creator, the late Ruth Handler

“Barbie and her creators, specifically Handler, are so iconic that it is hard to come up with something to say that hasn’t been said, but I’m confident that this book will leave her (Barbie and Handler) maybe a bit exposed,” issue author Tara Broeckel revealed. “Their collective story is so complex that often times the darker narrative is left untold.“

For over fifty years, Barbie has helped young girls come of age in the midst of an ever-changing social climate, but what do we really know about her?  Female Force: Ruth Handler, the Creator of Barbie tells the story of how America’s favorite fashion doll emerged from the seedy underworld of German sex symbols and cigarette shop gag gifts to become one of history’s most iconic women.

‘I never knew the sordid roots of such a sweet and innocent toy. It’s peachy to draw as there’s a humour that runs through the great writing and history which allows me to inject some comedy and fun into the art.’ artist Neil Alexander

“This is the first time we have featured a subject who is no longer with us (Handler passed away in 2002). But her importance, and the impact of her idea, has shaped the lives of many young girls, influenced fashion and still sparks debate,” said Bluewater’s president Darren Davis.

The title, written by Broeckel, was penciled by Neil Alexander and cover art was provided by Michael Szyksznian. The issue will retail for $3.99 and be available through most online venues as well as local comic book stores.

Bluewater launched the “Female Force” series in 2008 as a broad examination of strong and influential women who are shaping modern history and culture. In past issues, the monthly series has featured Michelle Obama, Hillary Clinton, Oprah Winfrey, Margaret Thatcher, JK Rowling, Sarah Palin and others.

Female Force individual issues are also available on Amazon.com, where they have been ranked among the site’s top 300 books. To Pre-order this one you can click here: