Issue #1 available for free digital download for the iPadTM, iPhone® and Sony PSP

San Diego, CA (April 27, 2011) – IDW Publishing and Frozen Beach Studios today announced the launch of the latest supernatural thriller comedy by Frozen Beach, entitled THE POUND. Created by Stephan Nilson and Charles Pritchett, THE POUND will be available digitally, and a collection of the entire five-issue series will be released in September 2011. To introduce readers to this exciting new series, THE POUND #1 is currently available for free through the IDW Comics iPad and iPhone app and will be available through the Sony Digital Comics store for PSP on June 1, 2011. Additionally, Frozen Beach Studios is also hosting the free Issue #1 of THE POUND on their Web site at www.frozenbeachstudios.com/pound.  Here, the comic can be downloaded as a PDF or CBZ.

Rated five out of five stars by Kitty’s Pryde, THE POUND follows Cleveland Animal Control Specialists Scott Allison and Howard Lynch, who have lost their jobs due to budget cuts and decide to start their own private stray animal retrieval business. At first it’s business as usual – retrieving a mother raccoon and her newborn litter from a crawlspace or removing bats from basements – but everything changes the night they receive a call about a large dog running loose in the halls of the high school.

“Being an advocate for digital comics, with over 70% of my monthly pull list in that format, I felt it was time to back my words with action,” stated Stephan Nilson, writer and co-creator of THE POUND. “Everyone working on THE POUND wanted to deliver a top-notch, original content comic series digitally first. Doing it through IDW Publishing’s store front, with its wide reach, is the perfect place to distribute our book to the world.”

Reviews continue to pour in for THE POUND. Comics Bulletin called it an “easy recommendation.” Still on the Shelf called it a “fun read.” Comic reviewer Todd H. Latoski praised THE POUND for “some of the best dialogue I have read in a long, long, LONG time.”

Underpaid, under-equipped and in way over their heads, Scottie and Howie take it upon themselves to help rehabilitate monsters looking to join society, and stop a plan to turn all Clevelanders into werewolves. For a more in depth look into the character of Howie, follow him on Twitter (@Howie_Lynch) as he continues to tweet exclusive introductions into the comic series. 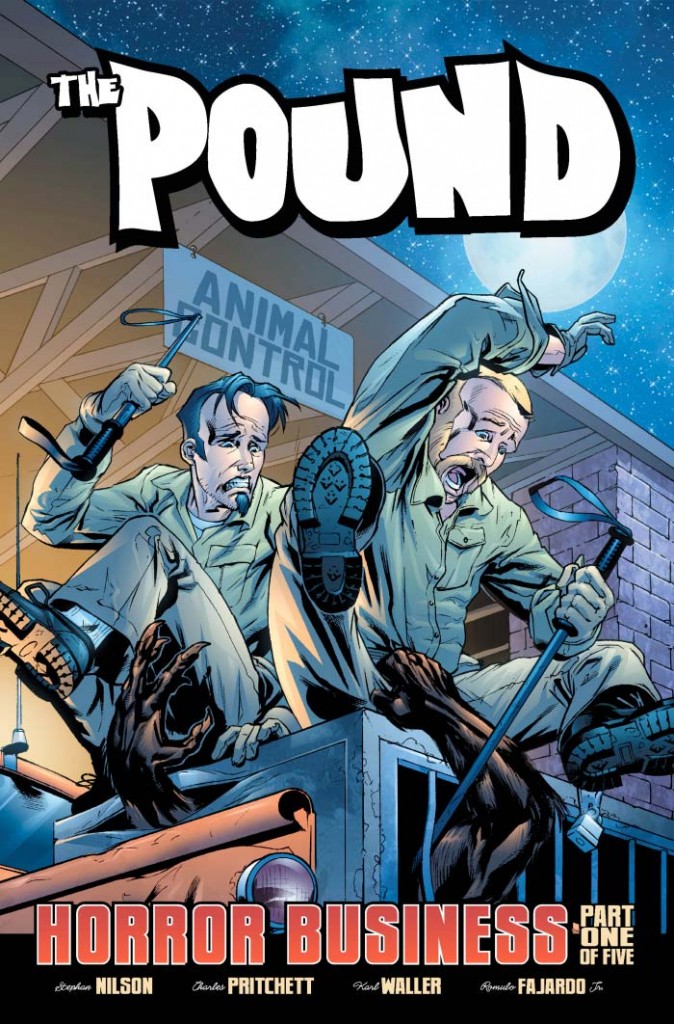 Visit IDWPublishing.com to learn more about the company and its top-selling books.
About IDW Publishing
IDW is an award-winning publisher of comic books, graphic novels and trade paperbacks, based in San Diego, California. Renowned for its diverse catalog of licensed and independent titles, IDW publishes some of the most successful and popular titles in the industry, including: Hasbro’s The Transformers and G.I. JOE, Paramount’s Star Trek; HBO’s True Blood; the BBC’s Doctor Who; Toho’s Godzilla and comics and trade collections based on novels by worldwide bestselling author, James Patterson. IDW is also home to the Library of American Comics imprint, which publishes classic comic reprints; Yoe! Books, a partnership with Yoe! Studio; and is the print publisher for EA Comics.

IDW’s original horror series, 30 Days of Night, was launched as a major motion picture in October 2007 by Sony Pictures and was the #1 film in its first week of release. More information about the company can be found at IDWPublishing.com.
About Frozen Beach Studios
Frozen Beach Studios was established in 2009 by Stephan Nilson and Charles Pritchett as a studio, which produces comics, graphic novels, television series and movies. Together the two creators have over thirty years experience in writing, print production, animation and filmmaking. Their combined skill set results in a perfect balance of talent and experience required to create and produce any project from start to finish.  The name Frozen Beach Studios is homage to the creators’ home bases in sunny Florida, the seasonal New York and the frozen coast of Prince Edward Island. Visit Frozen Beach Studios online at www.frozenbeachstudios.com/ to view a complete list of published titles.
Apple, the Apple logo, iPhone, iPod touch, and iTunes are trademarks of Apple Inc., registered in the U.S. and other countries. iPad is a trademark of Apple Inc. App Store is a service mark of Apple Inc. Content purchased from the iTunes Store is for personal lawful use only. Don’t steal music.