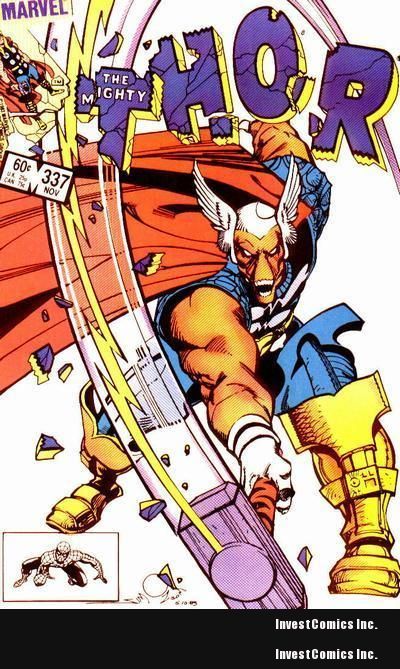 San Diego, CA (April 1, 2011) – IDW Publishing is thrilled to announce the expansion of the company’s acclaimed Artist’s Edition series with WALTER SIMONSON’S THE MIGHTY THOR: ARTIST’S EDITION. Launching in July, this oversized, hardcover collection will present Thor 337-340, Simonson’s first classic story arc, which introduced Beta Ray Bill, and Thor 360-362, Simonson’s choice for the second arc in the book. WALTER SIMONSON’S THE MIGHTY THOR: ARTIST’S EDITION will be the first in a series of Artist’s Editions featuring legendary creators and comics from Marvel.

“I can’t tell you how thrilling it is to be able to do a book like this,” said IDW Special Projects Editor, Scott Dunbier. “Each page is shot from Walter Simonson’s original art and printed same size—really just too cool. Thanks to Marvel Entertainment for being so enthusiastic about this project from the start!”

Debuting at San Diego Comic Con, WALTER SIMONSON’S THOR: ARTIST’S EDITION leads with Thor #337, a groundbreaking issue in modern comics that introduced Beta Ray Bill and kicked off Simonson’s legendary run on this fan-favorite title. All the pages in the ARTIST’S EDITION have been scanned from Simonson’s personal original art to ensure the highest possible quality reproduction. While appearing to be in black and white, each page was scanned in color to mimic as closely as possible the experience of viewing the actual original art—for instance, white-out corrections and blue pencil notations.

Visit IDWPublishing.com to learn more about the company and its top-selling books.
About IDW Publishing
IDW is an award-winning publisher of comic books, graphic novels and trade paperbacks, based in San Diego, California. Renowned for its diverse catalog of licensed and independent titles, IDW publishes some of the most successful and popular titles in the industry, including: Hasbro’s The Transformers and G.I. JOE, Paramount’s Star Trek; HBO’s True Blood; the BBC’s DOCTOR WHO; Toho’s Godzilla; and comics and trade collections based on novels by worldwide bestselling author, James Patterson. IDW is also home to the Library of American Comics imprint, which publishes classic comic reprints; Yoe! Books, a partnership with Yoe! Studios; and is the print publisher for EA Comics.

IDW’s original horror series, 30 Days of Night, was launched as a major motion picture in October 2007 by Sony Pictures and was the #1 film in its first week of release. More information about the company can be found at IDWPublishing.com.
About Marvel Entertainment
Marvel Entertainment, LLC, a wholly-owned subsidiary of The Walt Disney Company, is one of the world’s most prominent character-based entertainment companies, built on a proven library of over 8,000 characters featured in a variety of media over seventy years.  Marvel utilizes its character franchises in entertainment, licensing and publishing.  For more information visit www.marvel.com.