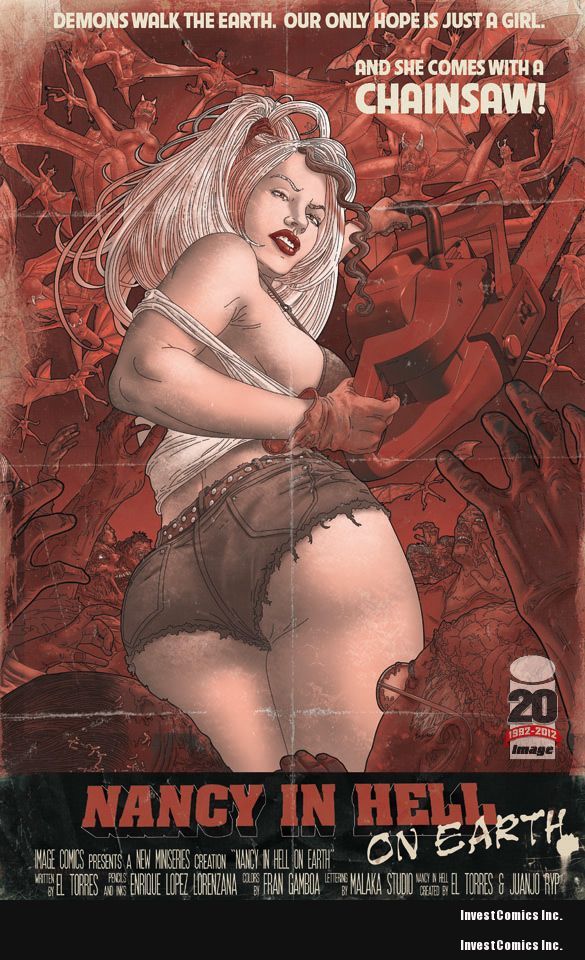 Berkeley, CA – 29 November 2011 — She’s already fought her way out of the depths of hell, armed only with a chainsaw and her badass attitude. Come January, the voluptuous Nancy will be topside again, but she’s about to find herself in Hell on Earth!

Spanish comics scribe El Torres has enlisted the intricately detailed artwork of Enrique Lopez Lorenzana and coloring of Fran Gamboa, to render even the beastliest citizens of Nancy’s Hell as breathtaking. This 4-issue Grindhouse inspired miniseries presents the follow up to last years’ NANCY IN HELL miniseries, a take-no-prisoners tale of one woman versus the greatest evil. Now with the Gates of Hades left wide open, not even the angels in heaven can save our world from the hordes!

“It’s not just because of the limitless special effects budget that the comics medium offers that we have big monsters, small monsters, tiny monsters, tentacled monsters, smelly monsters, and hot chicks,” explained El Torres. “It’s because I have great artists taking my words and transforming them into awesome pictures. I never believed I could visit Nancy again, but thanks to Enrique and Fran, here we are again!”

“To depict these hellish nightmares from El Torres’ mind pouring into San Diego city it’s both a challenge and a pleasure,” added Lorenzana. “Ryp did a wonderful job in the first miniseries, now it’s my turn, and I’m really happy to have the chance of design new monsters in almost every page!”

ABOUT EL TORRES
El Torres is an independent comic book writer with a taste for the macabre, living in the sunny and relaxed Andalusia, Spain. After several years working in the Spanish industry, he began to publish unique and disturbing horror stories that have been praised by critics and reviewers, like DRUMS or THE VEIL.  Now he turns again for the lighter, yet gorier, side of horror with one of his dearest creations: NANCY IN HELL.