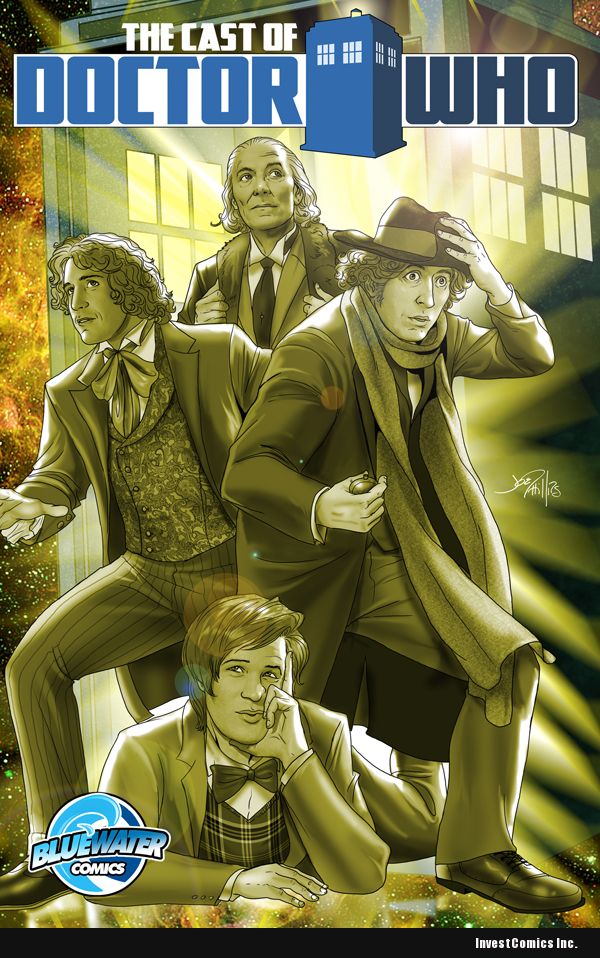 Long before the Enterprise traveled to the stars or Luke Skywalker was a gleam in the eye of Darth Vader, a thief with two hearts stole a time machine and traveled the universe several times over and saved the lives of
countless billions. Now as the British science fiction show, ³Doctor Who,² celebrates its fast approaching 50th anniversary, Bluewater Comics is sharing their latest bio-comic ³Orbit: The Cast of Doctor Who² with readers
in January 2012.

³Orbit: The Cast of Doctor Who² will come in both a graphic novel and single-issue form. Written by, Paul Salamoff and drawn by Jaime Martinez Rodriguez, Scott Boyce and DJ Burgess with covers by DC artist Joe Phillips.

³Doctor Who² debuted on the BBC in 1963 and was played by William Hartnell. When Hartnell decided to leave the role, it was then decided the Doctor could regenerate his appearance into another actor. Since then, over 11
actors have played the Doctor such as Tom Baker , Paul McGann and the current Doctor, Matt Smith and each will be featured in both versions of ³Orbit: The Cast of Doctor Who.² However, the graphic novel will feature a
bio on Peter Cushing who played the Doctor in two feature length movies, though he is not considered part of the 11 official actors, Bluewater wanted to mark his contribution.

³At Bluewater Comics we felt that a show like Doctor Who needed to have a bio-comic done,² said Darren Davis, president of Bluewater Comics. ³There were so many fine actors who played the role of the time traveler, we just wanted to highlight the careers of a handful of the actors.²

Writer Paul J. Salamoff said he has adored ³Doctor Who² since he was a child. ³I have been obsessed with ŒDoctor Who¹ for as long as I can remember,² said Salamoff. ³My office is literally filled with ŒDoctor Who¹
Toys, Books, DVD’s and Daleks. Lots of Daleks!²

Salamoff said writers could continue telling stories about the Doctor for another 50 years. “I find that the possibilities with the character are endless and the stories touch on every aspect of science fiction that I
love,² said Salamoff.

The ³Orbit² series was launched earlier in 2010 that serves a pop culture companion to Bluewater Comics successful ³Female Force,² ³Political Power² and ³Fame² series. The bio-comic allows Bluewater to delve into the history of certain newsworthy entertainers and explains how a person has achieved the level of office in the government.

Bluewater Comics biography comic book series has been featured on CNN, The Today Show, TV Guide, USA Today, People Magazine as well as thousands of other places. This issue will sell out fast, so make sure you pre-order it.

To order ³Orbit: The Cast of Doctor Who² graphic novel on Amazon click herehttp://amzn.to/sc0FCL and to purchase the single issue comic book contact your local comic book store by going to www.comicshoplocator.com

Tags: Bluewater Comics, Doctor Who, Paul J. Salamoff, THE CAST OF DOCTOR WHO IS GETTING THE BLUEWATER BIO-COMIC TREATMENT, William Hartnell