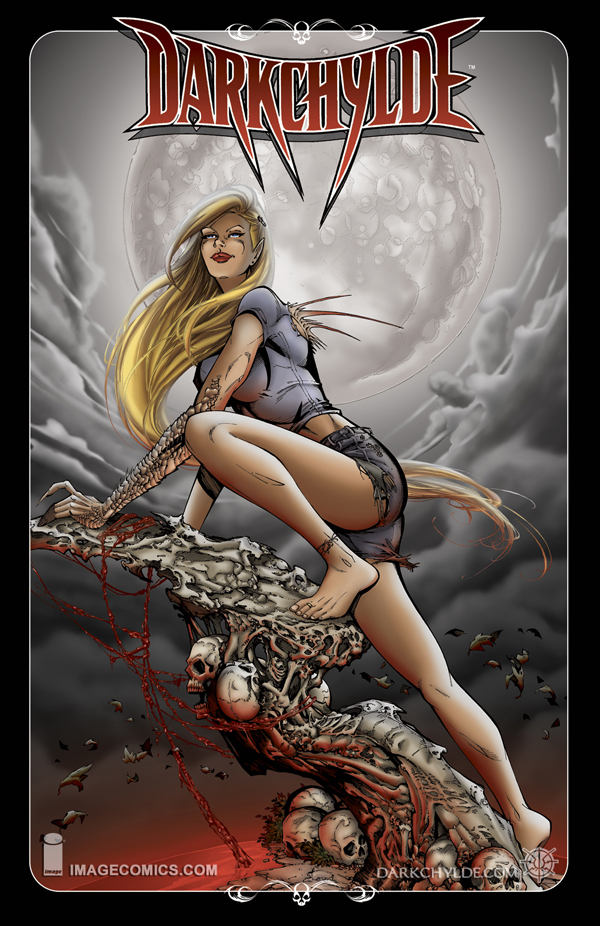 ARIEL’S NIGHTMARES CAN’T CONTAIN THEMSELVES
Image Comics releases DARKCHYLDE collection in Janauary
Berkeley, CA – 10 December 2010 – In January 2011, fans old and new will be able to catch up with accursed teen Ariel Chylde in DARKCHYLDE VOL.1: LEGACY AND REDEMPTION from Image Comics.
Ariel Chylde is a sweet-tempered girl with a terrifying secret: She can become the horrendous creatures from her many recurring nightmares. In DARKCHYLDE VOL. 1, collecting for the first time the “Legacy” and “Redmpetion” storylines, Ariel seeks salvation and an end to her terrible curse.
“2011 marks the 15th Anniversary of Ariel Chylde,” says creator and artist Randy Queen. “So, it is with great joy this rare collection of Darkchylde material is made available for the first time in America with Image. To ensure a truly dynamic package, we’ve added new pages of art, the poetic writings of Ariel Chylde, and many rare and unseen images. If you’re an older fan or newer fan, you’ll still find something fresh to discover in these haunted tales of the teen who can become the creatures from her nightmares!”
DARKCHYLDE VOL.1: LEGACY AND REDEMPTION (NOV100428), a 160-page full-color trade paperback collecting the “Legacy” and “Redemption” storylines of the hit series and featuring all new artwork and cover gallery, will be in stores on January 12, 2011, for $16.99.
A feature film is currently in development with John Carpenter attached to direct. Get the latest updates on Darkchylde at www.darkchylde.com.
Image Comics is a comic book and graphic novel publisher founded in 1992 by a collective of best-selling artists. Image has since gone on to become one of the largest comics publishers in the United States. Image currently has five partners: Robert Kirkman, Erik Larsen, Todd McFarlane, Marc Silvestri and Jim Valentino. It consists of five major houses: Todd McFarlane Productions, Top Cow Productions, Shadowline, Skybound and Image Central. Image publishes comics and graphic novels in nearly every genre, sub-genre, and style imaginable. It offers science fiction, romance, horror, crime fiction, historical fiction, humor and more by the finest artists and writers working in the medium today. For more information, visit www.imagecomics.com.