Image sends us some exclusive goodness regarding the new ongoing, Jersey Gods!

Check inside for some great info…..

a full look at the cover image by Mike Allred, and then get pumped for a february release of this exciting new series!

PRESS RELEASE – SUPERHEROES INVADE THE SUBURBS IN IMAGE COMICS‘ NEW ONGOING, JERSEY GODS!
Glen Brunswick & Dan McDaid begin their long-awaited superhero epic this February!
26 November 2008 (Berkeley, CA) – This February, after over a year in the making,  Image Comics will debut JERSEY GODS, the superhero epic by THE GRAY AREA writer Glen Brunswick and DOCTOR WHO artist Dan McDaid.
“JERSEY GODS represents a lifetime spent dreaming of superheroes,” said Brunswick. “Ever since I was young, the seeds of what would become JERSEY GODS were kicking around. JERSEY GODS is to me what SAVAGE DRAGON is for Erik Larsen or INVINCIBLE is for Robert Kirkman – it’s the superhero series I want to tell without an end; one I hope will keep readers coming back for years and years to come. Working with an artist as talented and versatile as Dan makes this a real dream come true.”
As originally previewed in Robert Kirkman’s INVINCIBLE, JERSEY GODS stars  Barock, a superhero from another planet, and Zoe, a high maintenance Jersey girl, soon after they’re married. However, it’s only a matter of time before Barock’s previous life threatens to tear their world apart. Each issue of JERSEY GODS features covers by some of comics hottest names, including MADMAN ATOMIC COMICS’s Mike Allred, DC: NEW FRONTIER’s Darwyn Cooke, HEAVY LIQUID’s Paul Pope and SAVAGE DRAGON’s Erik Larsen with many more to come. A limited-edition variant by McDaid is also available.
JERSEY GODS #1 (DEC082237), a 32-page full color comic book for $3.50, will be available February 4th, 2008. For more information, please see http://www.jerseygods.blogspot.com/ 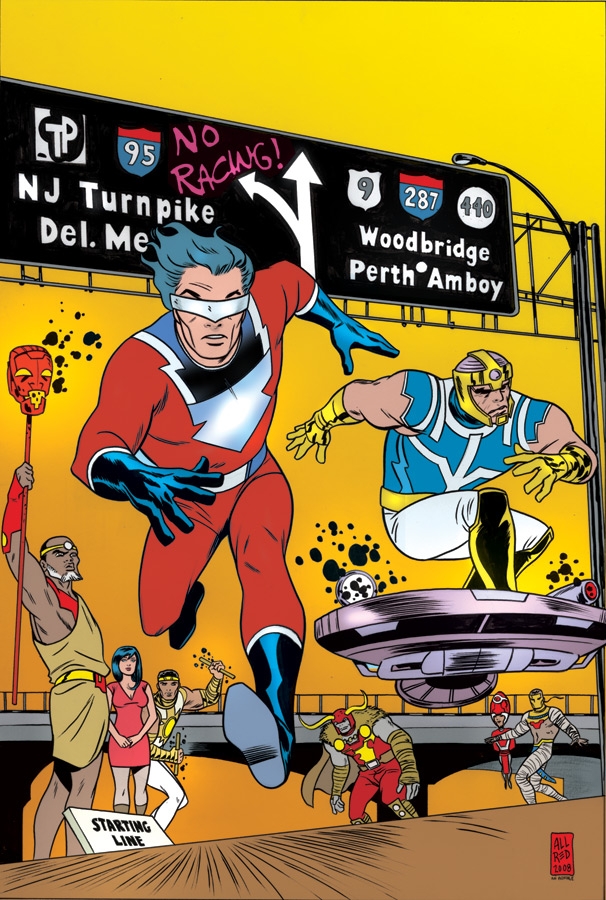