Coming soon to a comic store near you…

Girls on a beach!

Oh, it’s also a one-shot featuring Bomb Queen and many other Shadowline heroines and villainesses.

PRESS RELEASE – BOMB QUEEN PRESENTS SHADOWLINE’S ALL GIRL COMICS THIS MAY!
One-shot to feature Bomb Queen teaming up with the super-heroines of the Shadowline universe!

"Ever since restarting Shadowline, we’ve been slowly building up our very own corner of the Image universe, especially in the pages of BOMB QUEEN, SHADOWHAWK and most recently I HATE GALLANT GIRL. A spotlight is long overdue," Valentino said. "BOMB QUEEN PRESENTS: ALL GIRL COMICS showcases our super-heroines and most infamous super-villianess like never before in a self-contained adventure just about any super-hero fan will get a kick out of. It’s hard not to enjoy a bevy of beauties quite like this one!"
BOMB QUEEN PRESENTS: ALL GIRL COMICS, illustrated by Damoose, co-plotted by Valentino & Simon and written by Cahill, features the women of the Shadowline universe – Bomb Queen, Dee Rail, Blacklight, Rebound, Editor Girl, Tempest and Fetish – working together to solve a problem that affects them all: something is rendering all the men in the world impotent! Can Bomb Queen team up with Shadowline’s pantheon of super-heroines long enough to find the culprit and save the human race? Only this one-shot holds the key to the future of the Shadowline super-universe! BOMB QUEEN PRESENTS: ALL GIRL COMICS also features pinups by Image Comics Founders Jim Lee, Whilce Portacio and Jim Valentino!
BOMB QUEEN PRESENTS: ALL GIRL COMICS, a 32-page full color comic book for $3.50, will be in-stores May 27th, 2009. 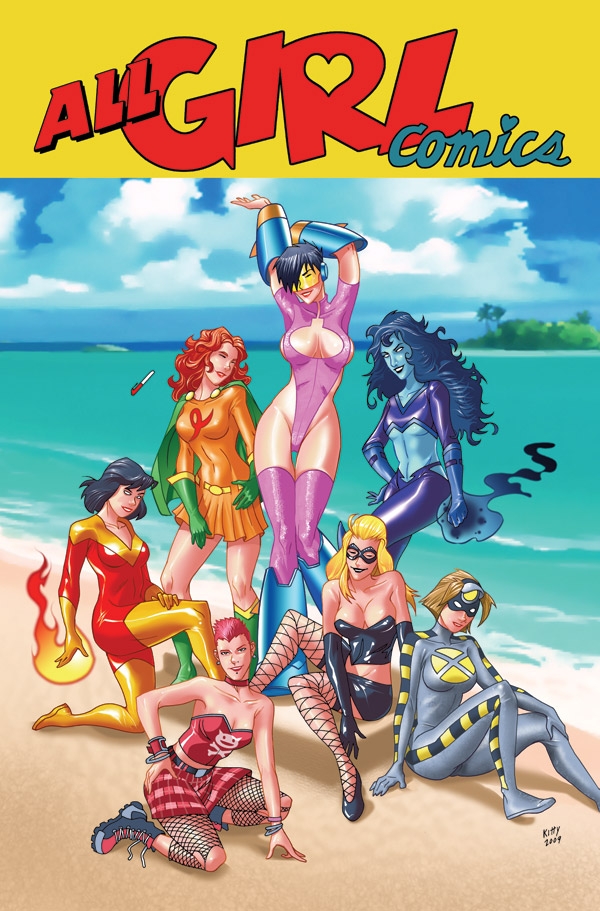