Image Comics is proud to announce a partnership with Visionary Comics and Pinnacle Entertainment to bring the award-winning RPG Deadlands to comics…with a vengeance!

Deadlands is a high profile RPG, having won every award in the gaming industry. It helped define the Weird Western genre! Each book will introduce the story and the world to appeal to gamers and non-gamers alike. Gamers will find a world you already love brought to vivid life. Non-gamers who enjoy westerns, horror, or steam punk will be introduced to a world of magic, shadows and six-guns that will hook you from page one.

In addition, the four one-shots will each feature one chapter of a four part back-up story, so if you collect all four, you get a bonus fifth comic free!

The first Deadlands one-shot will be solicited in the April Previews and available in June. Pre-Order and make sure you get yours!

To learn more about Pinnacle Entertainment, a fine purveyor of Role-playing games visit them at http://www.peginc.com/

To learn more about Visionary Comics, a fine purveyor of comic entertainment, visit them at http://visionarycomics.com/

ABOUT IMAGE COMICS
Image Comics is a comic book and graphic novel publisher founded in 1992 by a collective of best-selling artists. Image has since gone on to become one of the largest comics publishers in the United States. Image currently has five partners: Robert Kirkman, Erik Larsen, Todd McFarlane, Marc Silvestri and Jim Valentino. It consists of four major houses: Todd McFarlane Productions, Top Cow Productions, Shadowline and Image Central. Image publishes comics and graphic novels in nearly every genre, sub-genre, and style imaginable. It offers science fiction, romance, horror, crime fiction, historical fiction, humor and more by the finest artists and writers working in the medium today. For more information, visit www.imagecomics.com. 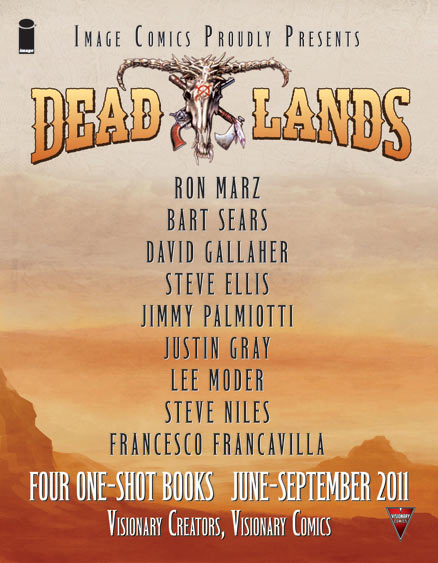