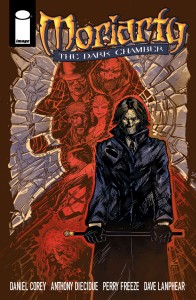 Moriarty Gets Collected in September

MORIARTY is an exciting new science fiction adventure series from Image Comics that follows the misdeeds of the original supervillain, Professor James Moriarty, arch nemesis of Sherlock Holmes. From the grimy streets of London to the haunting British countryside, underground lairs and superscience labs, Professor Moriarty must forge has way through a world without Sherlock.

It is 20 years after the death of Sherlock Holmes, and Professor James Moriarty is a lost man. MI5 blackmails Moriarty into finding Holmes’ long-lost brother, Mycroft, but what at first appears to be a routine case leads to a web of intrigue that involves a psychic box and its creator, a woman from Moriarty’s past, as well as a new villain that threatens to be greater than Moriarty ever was! See how Moriarty deals with love, loss, war and death rays in the critically acclaimed Image Comics series MORIARTY.

Here’s what reviewers and influential comic creators are saying about MORIARTY:

“MORIARTY is a book that should be mentioned in the same breath as THE WALKING DEAD, CHEW and HACK/SLASH when it comes to the best comics coming out of Image.” — Horror Haven Reviews

“I love MORIARTY. Most of all, I loved how in a world without Holmes, that it’s only in the mystery, the unanswered questions, that life for Sherlock’s arch enemy can begin again. Insightful, exciting and cool – with gritty, atmospheric art to match.” — Jim Krueger (EARTH X, JUSTICE, FOOTSOLDIERS)

“MORIARTY: THE DARK CHAMBER is irresistible. Professor James Moriarty, Sherlock Holmes’ arch-nemesis, drawn from retirement and off on his own death-defying adventure? It’s one of those simple, perfect ideas you kick yourself for not thinking of first, and Corey and Diecidue carry it off in fine style.” — Scott Tipton (ILLYRIA: HAUNTED, STAR TREK: INFESTATION)

“Even with characters that lead a pretty sad existence, there is a drive for something greater or at least a sense of discovery. It moves the piece along at a thrilling pace that respects, but expands upon Sir Arthur Canon Doyle’s fiction in a way that is thrilling and smart.” — The Daily Blam!

“Corey spins a wonderful world of conspiracy, despair, and even science fiction.” — IGN

“…this is a perfect example of a great collaboration of story and artist.” — Newsarama

“[MORIARTY] takes an intriguing look at that relationship between good and evil.” — USA Today

“…this is a damn good comic book.” — Bloody-Disgusting.com

Daniel Corey is a director, screenwriter, playwright, and novelist. He has authored screenplays, teleplays, stage plays, two comic series, and a novel.

Daniel spent four years as writer in residence with the New York Acting Ensemble, where 10 of his plays were produced, several of which he directed. Titles included JOGGERS, PSYCHE IN A BOX, STAR OF INDIA, and THE WHITE ROOM. Several of his screenplays have ranked in distinguished competitions, including Francis Ford Coppola’s American Zoetrope Screenwriting Competition and the Austin Film Festival Screenplay Contest.

In 2007, Daniel created DANGERKATT CREATIVE STUDIO, a company that serves as an umbrella for all of his creative endeavors. In 2009, DANGERKATT published PROPHET, a graphic novel written by Daniel, with art by Anthony Diecidue. Since then, Daniel and Anthony have worked together to create a new comic series titled MORIARTY, which follows the misadventures of Professor Moriarty, arch-nemesis of Sherlock Holmes. The first issue of MORIARTY was releasedMay 11th, 2011. The first volume collected graphic novel of MORIARTY will be releasedSeptember 14th, 2011, under the full title MORIARTY: THE DARK CHAMBER.

Anthony Diecidue (dee-ETCh-eh-DOO-eh) was born inMorristown,NJ, and is an alum of the prestigious Joe Kubert School of Cartoon and Graphic Art.

His digital technique has a traditional flare inspired by everything from comic books and animation to concept art.