MAKE YOUR VOICE HEARD!
THE COMIC BOOK WITH THE BIGGEST PRINT RUN WINS!

PRE-ORDER YOUR CANDIDATE’S COMIC BEFORE SEPTEMBER 29TH, 2011
COMIC BOOKS TO SHIP THIS NOVEMBER WINNERS ANNOUNCED AT THAT TIME! 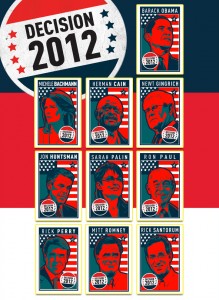 August 17th, 2011 – Los Angeles, CA – It’s a comic book industry first! Make your voice heard! This November, DECISION 2012 debuts the comic book industry’s first straw poll — with biographical comic books for all the top candidates in the 2012 Presidential race. The decision is in your hands; it’s up to you to see who wins! All print runs of each series will be announced this November and the candidate with the highest print wins!

The people of Iowa just had their straw poll and only Iowans could participate. Now with comic book’s first straw poll, all of America can participate! http://gallery.mailchimp.com/9d17c9217240226bbc79d6750/images/Give_This_Ballot_To_Your_Local_Retailer.pdf
“The DECISION 2012 line of comic books has something for everyone,” said Marketing and Sales Director Chip Mosher. “For those political junkies that love a good horse race, we have comic book’s first straw poll. For those voters and our young soon-to-be-voters, we have some great non-partisan biographical comics on all the major candidates – announced and waiting to be announced – in the presidential 2012 race. And finally, for the comic book collector we have a fantastic once-in-a-lifetime collectible. The DECISION 2012 comic line and comic book’s first straw poll is a great way to spotlight the upcoming 2012 election and get people excited about voting!”

The DECISION 2012 line of comics and comic book’s first straw poll isn’t just a contest, but also a great way for voters and students to educate themselves on the candidates running in the 2012 Presidential election. This series of biographical comic books details the history and political lives of the candidates for the 2012 Presidential Election, giving non-partisan background on President Barack Obama and such presidential hopefuls as Michele Bachmann, Herman Cain, Newt Gingrich, Jon Huntsman, Sarah Palin, Ron Paul, Rick Perry, Mitt Romney and Rick Santorum! The DECISION 2012 line of comic books are aimed at anyone of any age who enjoys reading and discussing U.S. politics.

More information on the straw poll and the DECISION 2012 line of comics can be found here: http://www.decision2012comics.com/
Remember to make sure you pre-order your candidate’s comic from your local comic shop by September 29th, 2011. If your candidate’s comic book does not get pre-ordered by at least 1,500 copies then it will not be printed. 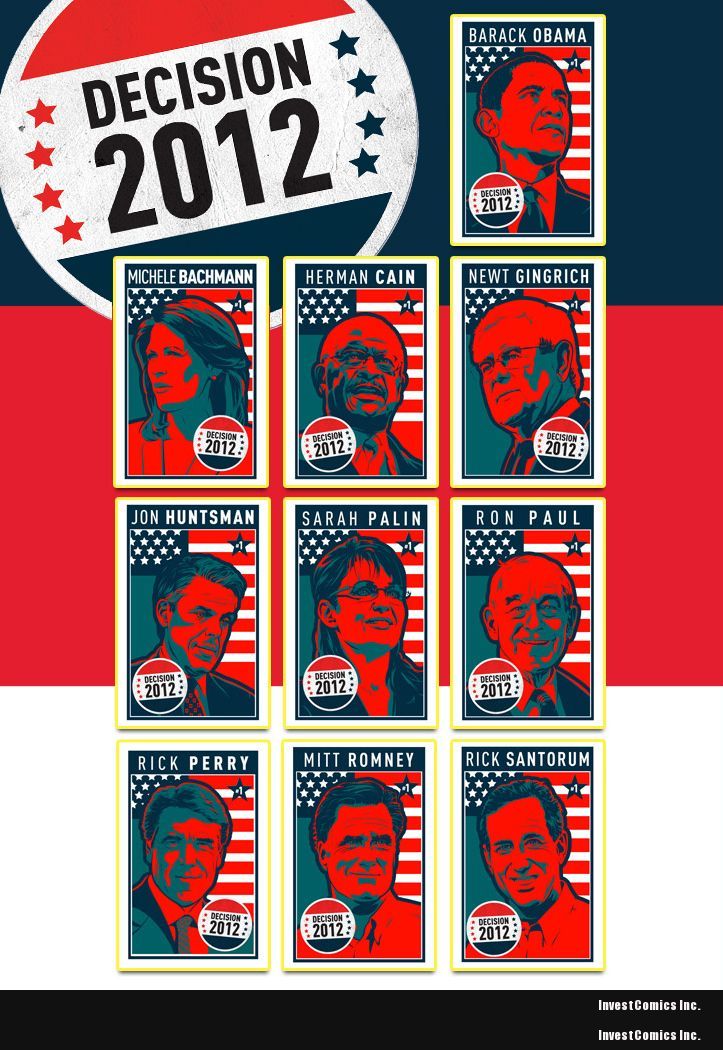