It’s Thor sitting in that little box for an Image Press Release.

You’ll only learn why if you click that link. 😉

PRESS RELEASE – IMAGE COMICS AND THE COMIC BOOK LEGAL DEFENSE FUND DEFEND YOUR LIBERTIES LIKE NEVER BEFORE!
/Image Comics Expands Support of Comic Book Legal Defense Fund!
/
20 March 2009 (Berkeley, CA) – At today’s ComicsPRO Annual Meeting, Image Comics announced plans to further expand its support of the Comic Book Legal Defense Fund, the comics’ industry’s first response in the fight against censorship.  Image will support the not-for-profit organization with a second installment of LIBERTY COMICS and will launch The CBLDF Liberty Series,* *a series of high-end variant covers featuring Image’s strongest titles with exclusive artwork not available anywhere else. All proceeds of both projects will go directly towards the Fund’s important defense of comics’ First Amendment rights.

"Image Comics was founded on defending comics’ creative freedom and the CBLDF continues the fight for securing the free speech rights we all depend on to do business," Image Comics Publisher Eric Stephenson said. "It’s important to us to ensure that they have the resources they need to continue that important work.  The CBLDF stands up for every creator, retailer, publisher, and fan in this industry, so it’s important to us, as a publisher, to stand up in support of their work."

The first step in Image’s expanded support of the Fund will be the launch of the CBLDF Liberty Series. These special edition comics will come at a slightly higher price and every dollar earned will go towards supporting the Comic Book Legal Defense Fund’s efforts to defend the industry’s rights to support a full line of comics. * *Every variant in the CBLDF Liberty Series* *is available as a separate line item from the regular series, allowing fans and retailers an easy opportunity to make a big difference.  Full details about participating books in this series will be released later this Spring, for the program’s launch this Summer.

This October, Image Comics will release LIBERTY COMICS #2, the sequel to last year’s all-star anthology which raised over $30,000 to benefit the Fund.  The second volume will continue the original’s tradition of featuring high end creators like Mike Mignola, J. Scott Campbell, Darwyn Cooke, Mark Millar, Walter Simonson, Garth Ennis, Darick Robertson, and Art Adams with a with a whole new roster to be announced in advance of this year’s Comic-Con International: San Diego.

CBLDF Executive Director Charles Brownstein says, "Image Comics has been extraordinary in their support of the CBLDF.  As a corporate member they are one of the pillars of the business community who support the Fund’s work.  With Liberty Comics and the new Liberty Series of covers, they are increasing their support in a way that will ensure we are able to continue to perform our legal work, and expand our education mission in new directions.  We are grateful to Image Comics, its partners, and creators for lending such extraordinary support to the CBLDF." 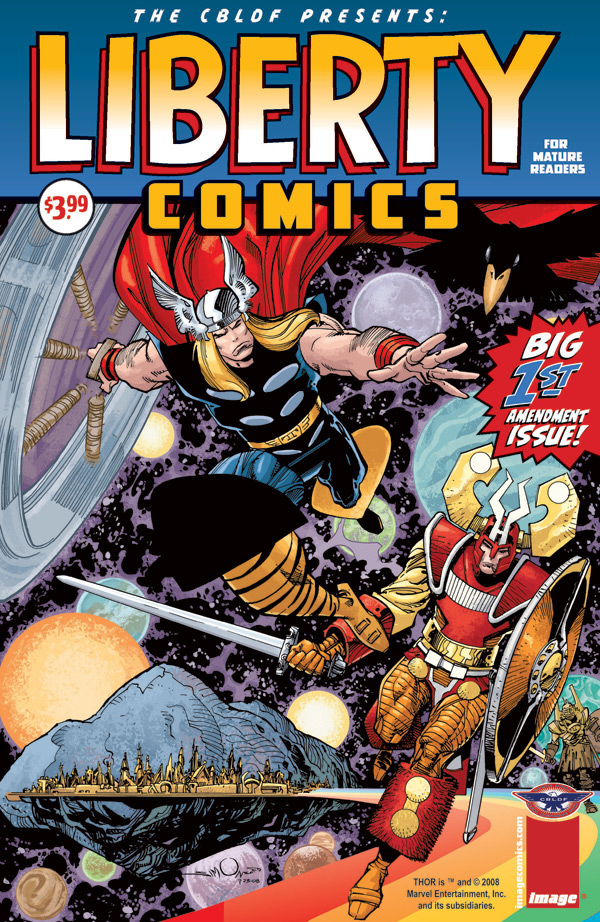 Image Comics is a comics and graphic novels publisher formed in 1992 by a collective of best-selling artists.  Since that time, Image has gone on to become one of the largest comics publishers in the United States. There are currently five partners in Image Comics (Robert Kirkman, Erik Larsen, Todd McFarlane, Marc Silvestri, and Jim Valentino), and Image is currently divided into four major houses (Todd McFarlane Productions, Top Cow Productions, Shadowline, and Image Central). Image comics and graphic novels cover nearly every genre, sub-genre, and style imaginable, offering science fiction, romance, horror, crime fiction, historical fiction, humor, and more by the finest artists and writers working in the medium today. Visit _www.imagecomics.com_ <http://www.imagecomics.com/>.