A Ghastly Interview with Decapitated Dan, Purveyor of Dark Delights

There are many people with a passion for comics and horror. But a scant few take it to the nth degree of Designer by Day/Horror Savant by Night Dan Royer (AKA “Decapitated Dan”).

Who is this caped crusader and benefactor of all things dark, gruesome and bloody?

Sliced straight from his website, “Decapitated Dan Royer is a horror comic journalist living in Illinois. He has been covering horror comics since 2009. He hosts three podcasts; Discussions with Decapitated Dan, Tales from the Water Cooler and the ComicMonsters Podcast. Dan is affiliated with numerous websites, most notably FromtheTombMagazine.tk, ComicRelated.com, ComicMonsters.com and ComicAttack.net and it is on these sites that you can find all of his columns, reviews and audio shows.”

When it comes to horror icons, Dan’s severed head is slowly approaching the notoriety of Elivira’s ghostly cleavage (OK, maybe not quite that attractive!). As certain as the Grim Reaper finds the next soul to take, Decapitated Dan is sure to uncover the best fresh meat in indie horror. And as if he’s not busy enough, he’s recently teamed with a band of other prolific horror readers to create the Ghastly Awards. 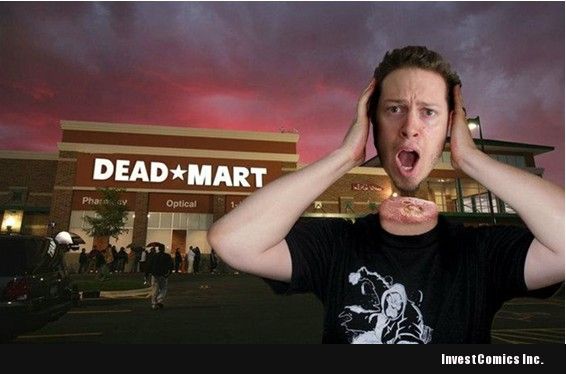 1) How much work – or how many beers – does it take to create your own horror awards?

(DECAP DAN:)  Haha! It takes 10 beers and a slap across the face. No, in all honesty it just takes some time and dedication. If you ask the other judges, we hustled on this. I was working on one thing, while they were debating another and we just moved forward from there. We got the website up and running, I made a Google Doc form to record the nominations and BAM! … we started to get the word out. We are still working on a logo at the moment, but that is really the last thing on the check list. Like I said, this was all really spur of the moment planning. I think we accomplished it all in a week and a half, so we could get in the 2011 awards.

2) Give us a quick soundbyte to introduce Decapitated Dan and your panel of ghastly judges. 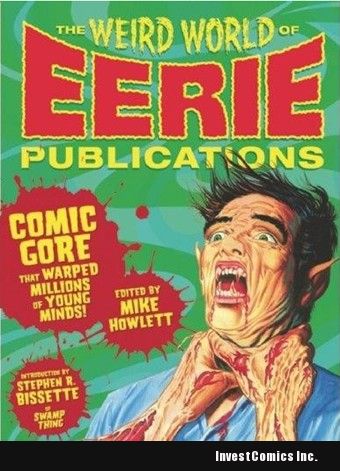 (DECAP DAN:)  Oh man, that’s a tough one. The easiest way to describe the panel is “Horror Comic Reading Professionals.” Breaking the group down we have: Lonnie Nadler who covers newer material for Bloody-Disgusting.com.

Then we bring in the 3 “Historians”:

Mike Howlett is an encyclopedia of horror comic knowledge and you can tell that by reading his book The Weird World of Eerie Publications.

Steve Banes runs one of the greatest sites online when it comes to old school horror, http://thehorrorsofitall.blogspot.com/.

Mykal Banta covers more than horror comics but when you take a look at his site http://www.bloodypulptales.com/, you can see that he knows his stuff.

And then there is me, and well what don’t I do horror comic wise?

3) Which one of you is the scariest dude in real life?

(DECAP DAN:)  Hmm… since I haven’t met the guys in person I will have to go with Mike Howlett because he likes snakes and I HATE snakes. So when he posts pictures of himself with these slithering things I get grossed out. 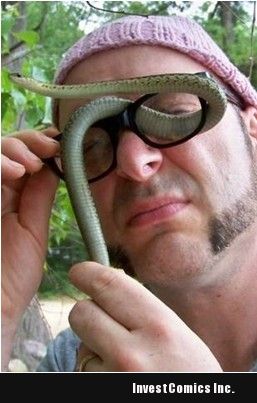 4) What makes the Ghastly Awards different from other horror awards — such as the ComicMonsters.com Horror Comic Awards?

(DECAP DAN:)  Well, plain and simple the Ghastly Awards are for Comic Book Professionals to nominate who they think is the best in Horror Comics. This is a peer-based system much like the Eisner Awards. We have a nomination form that can be filled out, throughout the year, and then the nominations are counted up and we have our nominees. Then the judges choose the winners.

Awards like the ComicMonsters.com Awards are fan based. A group of awesome people behind that site create the list of nominees and from there it goes over to the fans to choose a winner. It’s almost like the Oscars vs. the People’s Choice Award. Both systems are awesome because you need to have a Fan’s voice to be heard as well as Creators recognizing who they feel is the best at what they do.

5) Tell us how to vote and what our favorite horror creators will win.

(DECAP DAN:)  Well only Comic Book Professionals are able to nominate. It is a very simple process of going over to http://www.ghastlyawards.com and clicking on the nomination form. Then just fill out who you think is the best at what was offered in 2011. We have a link on the form that will show you what titles came out through Diamond Previews in 2011. Of course, any horror book created in 2011 – whether it was in Previews or not – can be nominated.

Creators can nominate up to 5 times in one year, and can only nominate one name or title one time. They are not allowed to nominate themselves or books they have worked on.

In terms of a prize, we know that we will be sending out certificates, possibly framed, to all the nominees who will be up for the win. We are still talking about the possibility of the winner getting a trophy of some kind. This is all based on the Sponsors, which we are looking for. The more money we can get into a pot, the better the prize we can offer. Sponsor info can be found on the website, if anyone is interested.

6) How are winners chosen?

(DECAP DAN:)  So once the year comes to a close I will tally up the people nominated. The top 5 in each category will be the nominees. From there the judges will take a look at the nominees and decide the winners.

7) How can sponsors support the Ghastly Awards, and how much does it cost?

(DECAP DAN:)  Like I mentioned earlier, we need Sponsors to help pay for the awards, and other fees like printing costs, mailing costs, etc. In the future we might do an actual award presentation at a show. I am currently talking to the Chicago conventions about this, since it is my hometown.

8) Beyond the Ghastlies, you also do a podcast, have an online horror mall, and regularly attend conventions. Illuminate us, please!

(DECAP DAN:)  I do what I can for the horror comic fan, because that is what I am and what I care about. Cheese City on that line, huh? The easiest way to know what I do is to go to www.decapitateddan.com, but since you asked, I host 2 podcasts and participate on a third. I host Discussions with Decapitated Dan, which is a weekly show where I sit down with horror comic creators and discuss what they are up to. The second show is Tales from the Water Cooler, where myself, Infinite Speech and the Southern Sensation review books. We all choose a book of the week, make the others read it and review it. The third is the ComicMonsters.com Podcast, which is a monthly podcast to recap that month in horror comics. You can find them all on iTunes or on my site.

In terms of horror comics, I do the typical reviews, which I am so far behind on. I work a regular 45 hour a week job as a graphic designer, so all the comic stuff is on the side (and it doesn’t pay anything!). I always have to say that for fun. Anyways, yes in 2011 I went to 2 shows with the Decapitated Dan Dark Delights. This is a collection of horror comics from all over the world. The concept was to help people who can’t afford a table at a show in the Midwest, due to travel and table fees, and combine the books from all over so they would be represented at these shows. Since no shows are going on right now though, the store can be found online at http://dddarkdelights.ecrater.com/ 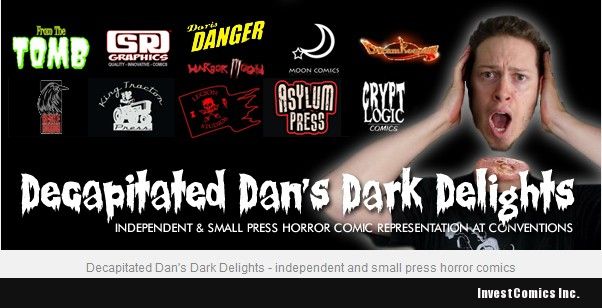 The last thing I HAVE to mention is Dan Con!

Dan Con is my comic book show that takes place here in the Chicago Southland. The concept behind this show is simple… Comic Books and Chicago! I have sellers and comic shops from all over the Chicago area coming in and all of the area Creators I can find. For the 2012 show, which will be on Sunday, March 4, I have 20 sellers and over 60 Creators. If you are in the area please come out and meet the people who are here, plus it is only $2 admission. You really cannot lose! To see the list of creators and more on Dan Con you can go to www.danconcomiccon.com 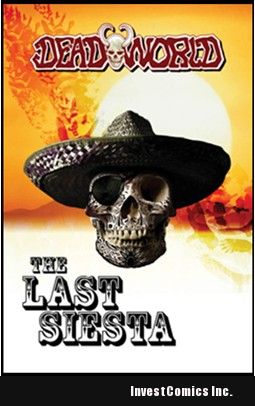 9) What is your favorite…

a) Horror comic: Currently Locke & Key, but all time… Deadworld is the greatest!

c) Horror game: Don’t have any. I’m not a big video game guy. So how about Atmosphere the VHS  board game?

d) Horror book: Anything by Washington Irving; that man could write horror.

e) Horror app: Don’t have any.

Editor’s Note – I’ll pinch hit for Dan on the app and personally nominate Zombie Booth (which turns any photo into an animated snarling zombie short movie clip) and for a freebie game, Dead Runner which has you hauling ass through a cemetery, chased by some unknown entity, until you crash into a tree.

10) What horror icon would you most want to be decapitated by?

(DECAP DAN:)  I can’t really say anyone. I don’t fall into that celebrity stuff. We are all equal in life. So since I bombed on that answer I will tell you the story of how I became “decapitated”.

Most people know I want my comics to have a great story. Well, I don’t find that a lot in today’s comics, so while reading another boring Superhero book, I couldn’t take it anymore and I started to pull on my hair. Due to having spikey hair, the hair spray held and I pulled my head off. There are many theories as to how I lost my head but that is the real one 😉

11) 2012 is around the corner … oh the Horror! What upcoming comic fare are you anticipating the most.  And, just curious, what did you think of the 2011 remake of FRIGHT NIGHT.

(DECAP DAN:)  I have not seen the Fright Night remake yet. I am a DVD rental guy, and I want to share some news for all your readers. I don’t even pay to rent DVD’s! I get them from my local library, where they are free and I get to keep them for a full week! HAHA! So to answer that question I am still waiting. My early thoughts though are Meh. I will admit this though… I love Dylan Dog the comic and when I saw a movie coming out starring Superman (Brandon Routh) I was not happy. I told people to avoid this at all costs because it did not represent the comic at all. Well, when the DVD came in I watched and I loved it. It was hilarious! It was so far removed from the comic that I couldn’t piece them together if it wanted to (minus the name and profession.) So the move was worth watching but American horror comic fans NEED to read Dylan Dog. That way we can get more of it translated (which I am also working on with a publisher).

As for 2012 there is so much to look forward to. So many great horror miniseries will come out, the DC new 52 horror books might still be going strong, I love Animal Man, JL Dark and I, Vampire. I always look forward to what Antarctic Press will release, as I love their horror line. Other than that, though, I just look forward to each and every horror book I can get my hands on. And sadly I think Locke & Key will come to an end in 2012 and I expect that to be beyond amazing.

Thanks Dan, for your continued stewardship of all things indie horror. And here’s hoping your Ghastly Awards is the start of a long-running gruesome tradition. 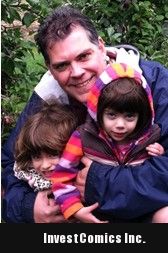