Strap yourself in for the 2nd installment of creator contributor interviews from ONE AND DONE, InvestComics’ anthology in support of the Comic Book Legal Defense Fund (buy it here). Last time we interviewed two ultra-cool hombres from South Africa with five stories accepted to the anthology. This time, we interview the guy with the 2nd most submissions − Canadian comic writer extraordinaire Dino Caruso, AKA “Mr. Anthology”, who has three diverse stories included in our “and-then-you-die” collection.

Why do we call Dino “Mr. Anthology”, you ask?

Now you can add InvestComics ONE AND DONE to the list.

You’ve read his bio, now hear from the “Antho-Man” himself …

1) You had three stories accepted into ONE AND DONE. Give us a quick logline on each one and your inspiration for writing it.

(DC:)  NO QUARTER was inspired by Star Trek, particularly the original series. I’m a huge fan of TOS and TNG, and this one-pager has got a scene I would have loved to have witnessed in the show! Of course, had one of aliens responded in such a way…the show wouldn’t have lasted very long. 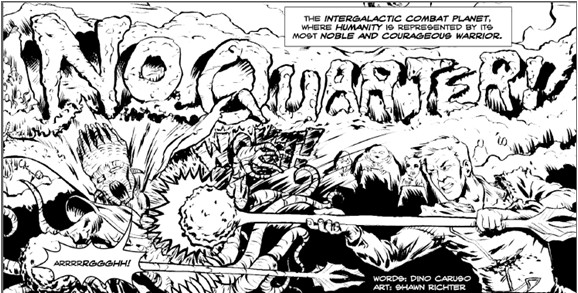 SPOUSE INVADERS was an idea I’d had percolating for quite a while, I just didn’t have a venue for it. The notion of a previously timid character suddenly not taking any more guff really appeals to me.

MELTDOWN was inspired by Firestorm, one of my favorite characters and books when I was a young feller. It was also inspired by Gibson’s love of dynamic action.

2) Who were the artists and letters on the respective stories?

(DC:)  Shawn Richter drew and lettered NO QUARTER. We’ve worked together on several projects, such as AGAINST THE WALL, FISK: SUBSTITUTE HERO, and the in-progress BULLETPROOF. Shawn’s also got a very cool project he’s working on right now called LEGEND OF THE SUNSET PEOPLE.

Gibson Quarter is the artist of MELTDOWN. We met in Ty Templeton’s workshop in Toronto last year, and we both had stories appear in Ty’s Holmes Inc. anthology. Gibson has worked with Alan Grant in the pages of Wasted, and he’s currently working on a cool project called The Organ Grinder.

Jaymes Reed is the letterer for MELTDOWN. Jaymes has lettered many projects for many companies, and he’s the mastermind of COMICS comics, currently being published by Bluewater. He’s written some very well-researched and entertaining biographies of influential comedians. I’m hopeful that Jaymes and I will have something official to announce in the near future. 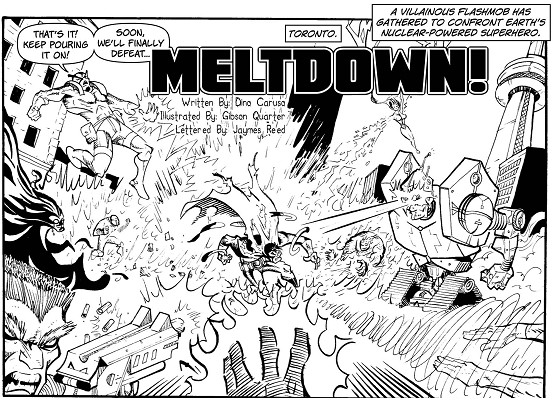 3) Which was your favorite, and why?

(DC:)  I like them all, for different reasons. NO QUARTER makes me think; SPOUSE INVADERS makes me laugh; and MELTDOWN shocks me!

But you know, all three of them will always bring back fond memories because I got to collaborate with friends and creators that I admire and respect. 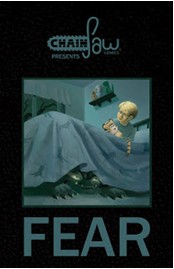 4) You also recently had a story in an anthology called FEAR by Chainsaw comics. I assume the premise of the anthology is obvious, but can you elaborate anyway and tell us about your particular fearful tale?

(DC:)  The story’s called BE CAREFUL WHERE YOU HIDE YOUR SECRETS, and it’s about a guy who kept the topic of his writing hidden from his significant other. When she found out about it, she didn’t react very well at all. It’s not based on an actual event, just a little meditation on what can come of being scared of sharing what’s inside you…and the importance of being honest with yourself and others about who you really are.

It’s illustrated by Paul Little, whose work as a colorist can be seen in several Image comics. He did an awesome job.

5) And you had 2 stories accepted into Criminal Element, an anthology by Jason Franks and Black Glass Press. Tell us about these stories and your collaborative creative teams. 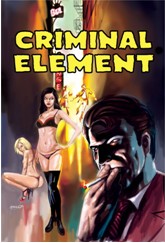 (DC:)  I love crime fiction, and I’d previously been part of a project called Acts Of Violence. When Jason came calling, I jumped at the chance to be part of this collection. My two stories are:

SLEEPING DOGS LIE is a story about a double cross (or is it a triple cross…? Can’t seem to keep those straight) that literally comes back to bite someone in an uncomfortable place.

OLD TIMER is about how deceptive appearances can sometimes be.

6) In 2011, the Reading with Pictures anthology that you participated in was nominated for 2 Harvey Awards. What was special about this collection that caught the critic’s attention?

(DC:)  First of all, I think that there were a tremendous collection of wonderful stories and wonderful creators in that book. I was honored to be included. Further to that, Josh Elder and the RWP crew have been very busy as advocates for comics in the classroom and improving literacy. It’s a very strong anthology and I think it’s unique in that its target audiences are young readers and the school system. It always gets a lot of looks at conventions. I make sure to put it in a prominent spot on my table. It’s always nice to have something that the kids can flip through.

7) What other anthologies have you had your work published in? Is there a favorite anthology or story of which you are most proud?

(DC:)  I feel very fortunate to have been included in a wide variety of anthologies. I’m proud of all of them, but some of my faves are:

A (YANKEE) ROSE BY ANY OTHER NAME, which appeared in Poseur Ink’s “Side B” anthology. This was a fun story, illustrated by Josh Kemble, about a trip to Toronto to see a David Lee Roth concert.

HOLLOW VICTORY, which appeared in Heske Horror’s “2012” anthology. This story was illustrated by Sami Kivela (who’s 2/3 done illustrating our next project…stay tuned!!) and it’s about my vision of what the end of the world will be like. Play Ball! 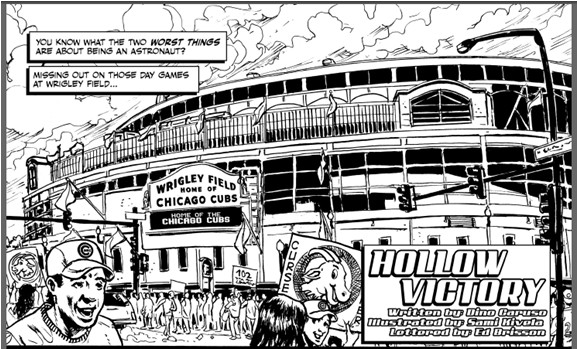 HOPE, which appeared in The Sleepless Phoenix’s “Survival Stories” anthology. This one was illustrated by Gary O’Donnell, and it’s got soccer and aliens. Need I say more?

Lastly, I’d like to mention BREAKING THE ICE, which was part of Ronin Studios’ “Hope” anthology. It was illustrated by Jason Moser, and it’s about an urban hero who misjudges the people on the wrong side of the tracks.

8) You have very good luck getting into anthologies — and a healthy does of talent, of course. How do you find the anthologies that you want to contribute to, or do the publishers find you?

(DC:)  A lot of times, you can find out about anthologies by doing a Google search to see who’s taking submissions. There are also boards such as Pencil Jack and Digital Webbing that publishers advertise on directly. Both of those sites have “help wanted” bulletin boards.

And after you’ve been around for a while, and gotten to know people, publishers will often come looking for you. Short stories are lots of fun, and I enjoy working on them a lot.

9) Tell us about your web comic, The Adventures of Bell Boy, which you created with artist Simon Fernandes. The main character is a 2nd grade boy with imaginary “super powers”. How many strips have you developed? And what are you ultimate plans for this whimsical superkid character?

(DC:)  BELL BOY is lots of fun. It’s done in the style of a 4 panel newspaper strip, and it’s the story of a kid in grade two who gets superpowers every time the recess bell rings…or at least, he thinks he does. I’d say it’s influenced by Bloom County, Peanuts and Calvin & Hobbes.

Simon is an awesome co-creator. He brings the perfect artistic style to this project. He’s amazing with the facial expressions, body language and action. It’s been an absolute joy to work on this with him. It’s my greatest hope that BELL BOY keeps on being heroic on the playground for many years to come. You can read all about him at http://bell-boy.ca.

This is the only ongoing comic strip I’ve been a part of. I might someday like to try a one-panel gag comic, but for now, I’m really content focusing my efforts on BELL BOY. 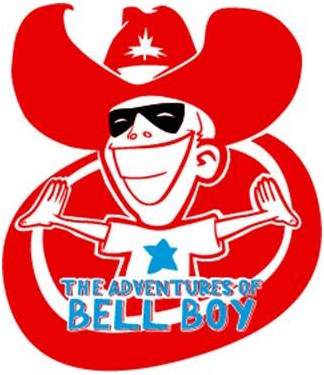 10) You also do interviews yourself. Who are some of the more memorable writers and artists that you’ve interviewed?

(DC:) Yeah, I had a lot of fun with my ONE PAGE AT A TIME interviews. They first appeared on the Crystal Fractal Comics news page, but then they were later syndicated to ComicBookInterviews.com.

I mostly interviewed creators I knew, and it was a nice opportunity to give some well-deserved spotlight to some of my friends and collaborators. One creator that I didn’t know, however, was Royal McGraw, who worked on Batman. That interview was pretty cool. I learned a lot.

11) From several posts on your blog, Community Service seems to be a project that has for a long-time been kept under wraps but is now being dusted off and coming to life in graphic TPB format. Tell us about this project and how you got the momentum going.

(DC:) COMMUNITY SERVICE is a story and script I’m very proud of. And yes, it’s been an ongoing project for about ten years. I’ve revised and rewritten it many times and I’m finally feeling comfortable with it. It’s loosely based on some experiences I had, so it was really important to me that the script felt “right”. 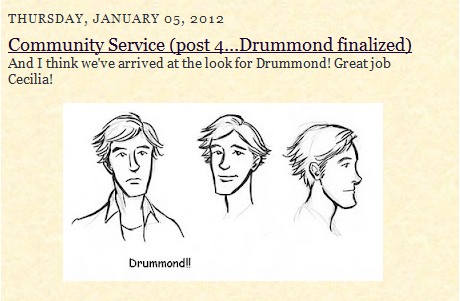 Cecilia Latella, a wondeful illustrator from Italy, is working on the pages as we speak. She has a great feel for the characters and her storytelling is superb. There are no superheroics, horror or crime elements to this story. It’s about regular people living their lives and dealing with the stuff we deal with every day…growing up and trying to figure out who we are and where we belong in the world.

You can follow along on my site, http://www.carusocomics.blogspot.com/, for updates. I’ve been trying to regularly post our progress with a little bit of commentary.

12) Last chance to pimp any projects you’re working on, events you’ll be attending and URLs we’ll want to visit to follow the creative works of Dino Caruso.

First of all, thanks for the opportunity to ramble. It was lots of fun.

Well, there are a couple of things I’m doing for Red Leaf Comics. One of them is a graphic novel called COURAGE, illustrated by Paul Houston. The other is a serial called GRYFALCON, illustrated by Francisco Paronzini (and my good friend Shawn Richter will also illustrate a chapter). 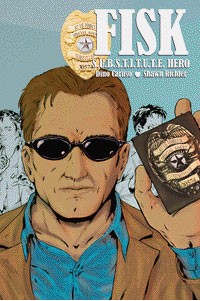 Sami Kivela and I are working on a project for Markosia. The working title is OUTCAST, but that may be changing. Sami’s doing amazing work on this one.

Shawn Richter and I are working on sprucing up FISK: SUBSTITUTE HERO, a concept that I find lots of fun, and we’re soon going to be pitching a project that’s titled BULLETPROOF.

Sam Agro and I also have a couple of stories on the verge of moving forward, but … can’t quite talk about those ones yet. Hopefully soon.

Whew! That’s an epic amount of pots you’ve got brewin’ on the fire, Dino. From now on we’re calling you “CAPTAIN ANTHOLOGY”! Keep cranking out the great work, and I encourage everyone to check out Dino’s submissions to ONE AND DONE.