InvestComics Announces “One and Done” Anthology Available for Purchase Online 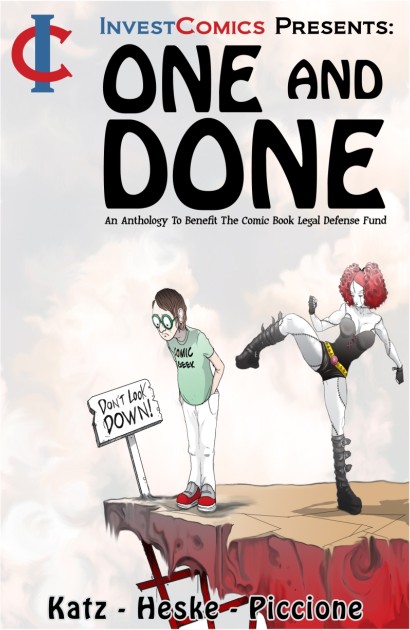 (West Palm Beach, Florida; January 31, 2012) – Comic book and entertainment information website InvestComics is proud to announce that “One and Done” − a charitable anthology to benefit the Comic Book Legal Defense Fund − is now available for purchase on the Mira Publishing website at www.mirashartshop.com. “Today marks the beginning of InvestComics’ fight against censorship and the right for Freedom of Speech,” said Jay Katz, President of InvestComics. “We are proud to support such a great cause and will always be a strong supporter of CBLDF.”

Bob Heske, a graphic novelist, web columnist and editor on the anthology, added, “We’re thrilled to get a book out that features worldwide talent for such a great cause. The one-page graphic tales that each end in death are like a box of chocolates − you don’t know what you’ll get until you bite inside!”

“I am proud to be a part of such a fantastic charity like CBLDF” echoed Sebastian Piccione, also an editor on the book and a regular contributor to the InvestComics website. “The mix of stories and styles from accomplished and emerging creators makes this book unique and fun to read.”

InvestComics reached out to industry creators with a call for submissions on its website in June 2011. The rules were simple: Stories could be of any genre as long as they were one page in length and the last page ended in death (shown or implied).

According to InvestComics Katz the response was overwhelming. “This unique anthology asked creators to be generous in their submission and extremely creative in their content. And I’m proud to say they’ve stepped up to the plate big time and hit it out of the park,” says Katz in reference to the quality of submissions received. The InvestComics One and Done Anthology features contributors from all over the globe including established industry pros like Mark McKenna, Duncan Eagleson, Rob Jones, and Peter Palimotti and emerging talent on the cusp of being recognized. Nearly 50 “One and Done” tales were accepted. There is also a special section called “Killer Extras” featuring additional original works by Bob Heske, Duncan Eagleson, David Paul, and also a pinup page from cover artist Gary T. Becks.

Orders can be placed directly on line at http://www.mirasmartshop.com/ at this URL:

Also, if you are in Florida, the One and Done Anthology can be purchased at Tate’s Comics in Lauderhill, Florida. Tate’s Comics web address is www.tatescomics.com.

InvestComics will announce random winners of prizes to be given out by Tate’s Comics as well as interviews to be carried on the InvestComics website and InvestComics TV website. The first interview will be posted the week of January 23rd featuring South African creators Arno Hurter and David Edwards who had five stories accepted for the book (the most of any creator team), and will appear in Bob Heske’s popular IndieCreator column.

InvestComics™ started as a magazine in 2006; the first issue wasn’t released until June of 2007. The magazine was distributed as a free comic book Investment Guide throughout local comic shops in South Florida. It was also a giveaway on Ebay for any winning bid to receive with their order.

Although the InvestComics™ web site was on line in 2005, it wasn’t until 2007 the web site became the main focal point and the magazine ceased. InvestComics™ wanted to start reaching a broader audience and began to rapidly expand. InvestComics™ became the “Entertainment” Investment Guide as a result of covering many areas in the industry, focusing on entertainment as well as highlighting investment opportunities. Most recently the launch of InvestComics TV (ICTV) has made the site multi-media, attracting some of the biggest names in the industry to appear in a split-screen 10-12 minute interview format.

Comic Book Legal Defense Fund is a non-profit organization dedicated to the protection of the First Amendment rights of the comics art form and its community of retailers, creators, publishers, librarians, and readers. The CBLDF provides legal referrals, representation, advice, assistance, and education in furtherance of these goals. If you wish to support CBLDF, you can visit their website at http://cbldf.org/.

4 thoughts on “InvestComics One and Done Anthology Now Available”