If you are a diehard, long-time frequenter of this column, you may recognize the name “David Paul” as an IndieCreator déjà vu. You’d be right! I first interviewed David a  few years ago when I started this column (gasp, has it been that long?). David was one of the first 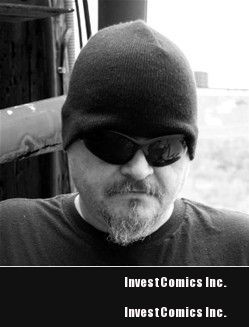 dudes I “met” (meaning we interfaced over the Web) when I entered the comic book biz. He was a letterist on a few of my stories  in my Heske Horror anthologies (Bone Chiller, 2012: Final Prayer) and even interviewed me back when he was a contributor to Project Fanboy. Now  I return the favor (again) as David embarks on a new venture: a-very-funny-but-you-don’t-want-to-laugh-in-front-of-your-Catholic-priest strip called JOSEPH. The comic strip is a modern day parable of Jesus − but as an insouciant teen who hangs out with Satan’s spawn. The moral isn’t about Religion; it’s about, well − being a teen and, in a quirky way, about living with a dysfunctional “family”.

Before we hasten on the path to Hell, I should also point out that David is a contributor to InvestComic’s ONE AND DONE anthology, as well as does kick-ass reviews for this venerable website. And the dude’s a drummer. Rock on, David Paul…!

1)  How did you come up premise for the hysterically unholy web comic JOSEPH? And did a bolt of lightning strike you immediately afterward?

(DP:)  This is funny. It sounds ridiculous but I had a dream that I was writing it. It was something very vivid. When I woke up it just wouldn’t leave and so I thought, well why not?! So I started writing all my artist contacts and friends to tell them about it and originally I was going to call it “Jesus!” … like something you exclaim before a truck hits you and you die.

All the artists loved the idea and wanted to do it. But you know artists − always busy. The only artist who wanted it and actually did anything with it was Gary T. Becks. I mean he took the idea and ran! When I saw his character studies of both Joseph and Jesus I just couldn’t believe what I was seeing. It was the dream coming to life! 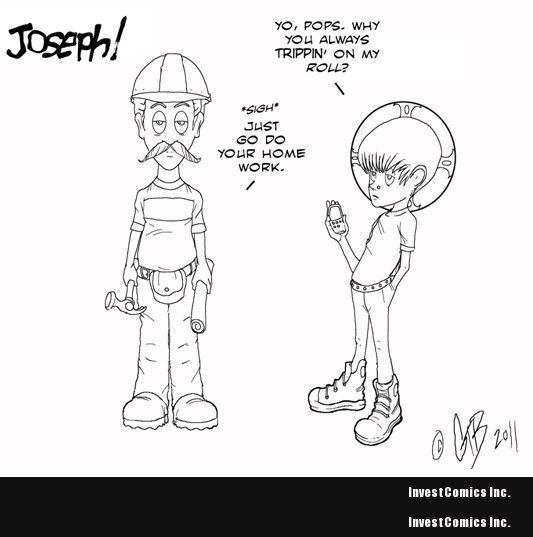 2)  How do you toe the line between funny irreverent and blasphemous “damn-you-to-hell”? From the dozen or so strips I’ve seen, you do it well.

(DP:)  Well the thing is I just don’t care. Wait. I take that back. I do care. But the thing I care about is if it is funny. I mean really, that’s all that matters. I think the people who did this sort of thing best was Monty Python. Or even Mel Brooks. They really pushed it. Come on. Blasphemy is funny! But in the beginning, just after Gary did his first character studies, I was concerned that it just wouldn’t fly. So I did the only thing I could do and I found religious people to show it to. I thought for sure they would tell me I was going to hell. But everyone who saw it reacted very positive to it. An old friend of mine is a minister and he finds it hilarious.

3)  How did you find the artist? Tell us why he’s the right man for the job!

(DP:)  I knew Gary’s work from the web comic Mazscara and I was such a huge fan I just always wanted to work with him. I probably became annoying enough to where he eventually just gave me some work to letter. I think my first work for him was “Fiendy” which was published in Heavy Metal a while back. That got some cool responses, so we kept at it. I’m actually working for him on another long-term project right now called The Humorville Hillarions, but that’s something that will not be ready for submission for a long time yet. But yeah, when I had that dream I sent him the idea and like I said, he took it and ran. It was just something very surreal when I saw those first character studies.

4)  What goes into creating a comic strip, and what advice do you have for anyone who wants to go down that road?

(DP:)  I’ve read somewhere before that Charles Schulz felt like it was something that he had to do. That if he didn’t do it (every day) then Peanuts would have found another way to get out of him. And I tell you the truth: Ever since that dream “Joseph!” has been exploding out of me.

I write these short strips almost every day, sometimes as many as 12-14 strips a day, and there is no end in sight. I could see myself as an old man still writing these strips and the well from which they come from would be nowhere near even half empty, let alone dry. If I’m fortunate enough to be an old man and look back on my life and still be writing “Joseph!” I’ll be a happy old heretic and then I can advise any who would dare think about taking on an ongoing cartoon strip. For now I can really only say that a writer writes. If it’s cartooning that you honestly want to write, then 1) it must be funny, and 2) repeat Step #1.

(DP:) Well, see? Now you’ve gone and given me ideas. And there are so many ideas floating around right now I can’t even guess what I’m going to write about. But off the top of my head I’d like to see Joseph looking at Jesus on that very special day when nothing happens and saying, “Don’t you have somewhere to be?”

6)   Who is your favorite character in the strip – and is there any “David Paul” in the Jesus with a teenager attitude character?

(DP:)  I love Ruthie. To me little girls are the world. They can just look at you in a certain way and say things in a certain way that will break your heart. If you don’t do whatever it takes to put a smile on her face and make her laugh, then you haven’t done your job. Hearing her say, “I love you” is the best thing in the universe.  And if any little up-start even thinks about hurting her, you’ll drop-kick him across the yard.

As for 14 year old modern-day-Jesus, there are only a few sources I can draw from. One of those is my own youth. Dads, we were all boys once so we all know what that’s about. But the other source comes from my observations of kids today. When I write a conversation with Jesus and Lil’ D. it’s usually based on the way kids talk today. That’s not too far from the way I used to talk when I was 14. Come on, dads. Think about some of the words we used to use. Some of us even used the word “word”.

7)  You are a writer, letterist, and indie publisher. What’s the most fun you’ve had working on a project?

(DP:)  I’ve enjoyed everything I’ve done because I only work on those projects I genuinely want to work on. Sometimes it’s professional and I get paid for it. Most of the time it’s not. I’m okay with that because I’m happy. I love everything else that I am doing, yes. But I have to say that the absolute most fun I have had is right here, right now with “Joseph!”.

I get to write this cartoon strip every day and it brings me so much joy to do. And now that InvestComics is going to be the exclusive home to “Joseph!” I now get to do it for others to enjoy, and not just satisfy the voices in my head. …oh, the voices!

8)  For a while, you published a webzine called RocknRoll Graphix.  What did you learn from that process? And would you ever self-publish a magazine again?

(DP:)  I learned so much that I just can’t possibly regret that experience. It was a massive failure. I tried things that didn’t work. At all. I’m not a business man. I was a good editor. But when it came to trying to run it like a business I just fell on my face. I borrowed a lot of money to make that thing happen and in the end it flopped. But I still don’t regret it. It was a great experience. As for doing it again, I would only go down that road if it was with a partner who knew much more about real business than I do and could tackle that. 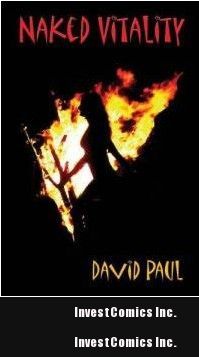 9)  Your book NAKED VITALITY was nominated for a National Poet Laureate’s award. Tell us about it and where we can get it.

(DP:)  My deal with the publisher actually expires this coming May. After that the book will be out of publication. It’s still available on Amazon and a few other sites, I think. I am proud of that book but it did not do well. When you receive literary nominations, unless you have a name or someone with a name is promoting it (*eh-hem*… Oprah!), then the work goes unnoticed and unappreciated.

10) What is you most awesome unpublished literary work that you want the World to know about?

(DP:)  Man, you go for the jugular! Okay. I will put it this way: It is never up to the artist what he will be remembered for. Once you have created the work and presented it to the public, it is no longer yours. It is now the sole property of Humanity. Perhaps Melville in his lifetime didn’t want to be known for Moby Dick. After all, it was a failure. Not only was he a novelist, he was also a short story writer, essayist, and poet. We don’t know what he wanted to be known for. Certainly not a giant book about a whale that failed miserably.

Wait. I forgot the question. Oh, yeah! I want the world to know about “Joseph!”.

11)  What are your plans to make Joseph mainstream in 2012? Anything else on your plate?

(DP:)  I’ve tried to take control over my creations before. “Joseph!” is starting a life of its own. I’m curious to see where it will go so I am not going to try and force anything. My primary focus is just going to be writing the best cartoon strip I can.

And, oh boy. Do I have things on my plate! Amongst (do people still use that word?) all the lettering I’m doing on various projects I’m also writing under different names. Just started a studio with the artists Jason Lenox and Cindy A. Joubert called Ugli Studios with one of those other names. I’ll still be writing quite a bit under my own name, making contributions here at InvestComics. Something I’m very excited about is that Jay Katz (CEO InvestComics) has made me Web Comics Manager. So I’m now in charge of running web comics here at IC. I’ll be doing my best to recruit creators to bring their comic strips here and join “Joseph!” in making the world a better place.

12)  Just as there were 12 Apostles, you get 12 Questions. What websites have you been associated with as a comic book reviewer, and what are the top five books that have blown you away?

Well, recently I have made contributions to THWP! 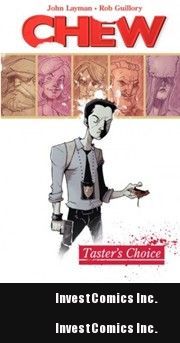 Thank you, David! We welcome you to the InvestComics family and look forward to reading you and JOSEPH! until, well (gulp) … Hell freezes over!