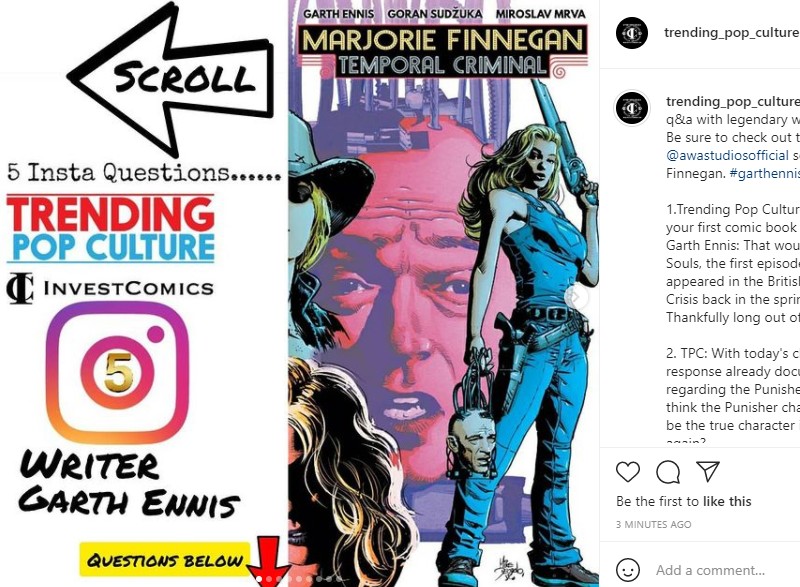 Visit our Instagram page at trending_pop_culture and scroll through all of the awesome images.
Buy the NEW @awastudiosofficial series, Marjorie Finnegan Temporal Criminal. #garthennis

1. Trending Pop Culture: What was your first comic book published work?
Garth Ennis: That would be Troubled Souls, the first episode of which appeared in the British political comic Crisis back in the spring of ’89. Thankfully long out of print.
2. TPC: With today’s climate and your response already documented regarding the Punisher T’s, Do you think the Punisher character will ever be the true character it should be again?
GE: Given that like all mainstream characters the Punisher is a corporate trademark, it doesn’t do to get sentimental about his true character. Marvel will do whatever they feel (or guess, if we’re honest) is necessary to make the Punisher a commercial success (battle suits, Frankenstein’s monster, space travel etc) or prevent him from doing damage to their overall brand. For myself, I read almost no other Punisher comics anyway, so for me it’s simple- if I can write Frank the way I want to I’ll stick around and do more. If I can’t, I won’t.
3. TPC: Your new series for AWA Publishing, Marjorie Finnegan Temporal Criminal, what is the premise?
GE: Marj is a temporal criminal, racing up and down the time lanes to grab everything pretty-shiny-gleamy that takes her fancy. She doesn’t take life terribly seriously, to be honest, and never pays much attention to the chaos she leaves in her wake. Unfortunately, one of her recent acquisitions has fallen into the hands of someone truly despicable, someone so evil it’s actually his name- and he’s planning on doing the kind of damage no one can ignore. This means Marj, her wretched friend Tim the severed head, and the cop who’s usually hard on her tail end up having to do something about it. Which means all of reality is in very deep shit.
4. TPC: Is this a new character or has she been floating in your head for a while?
GE: A couple of years, no more. When I started thinking about a time travel story it occurred to me that it was actually a pretty serious subject- after all, any damage you do in the past could have extremely dangerous ramifications for the future. So obviously the best kind of character to write in such a story would be someone totally irresponsible. Step forward Marj.
5. TPC: Where can fans find out about new projects and news from Garth Ennis?
GE: Presumably whoever’s publishing my work at the time. 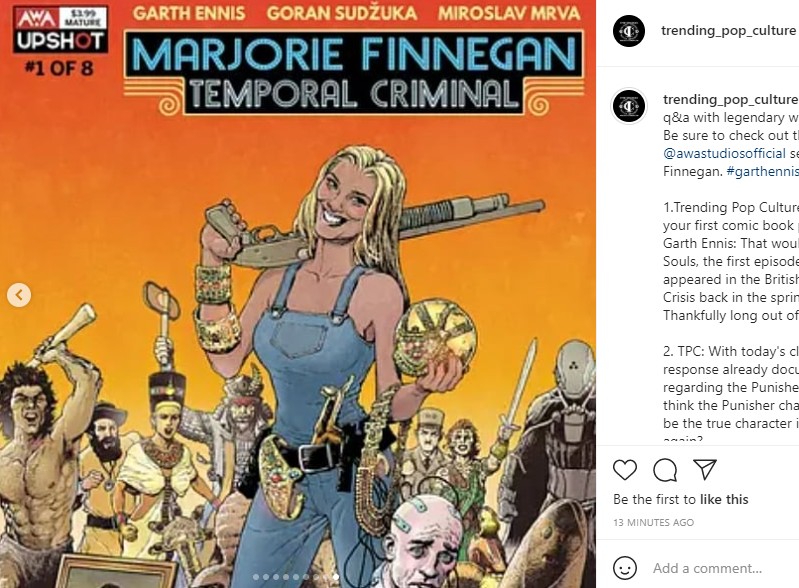