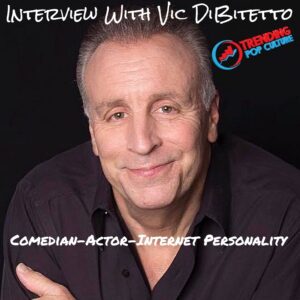 Vic DiBitetto is one of the best comedians of this generation. Vic DiBitetto likes to refer to himself as the Working Class Zero, the Donkey of Comedy and the Italian Hurricane. An American stand-up comedian, Internet/Social Media superstar, and actor. Born in Brooklyn New York in 1961, Vic now resides in New Jersey with his wife Lucy, who fans know is the apple of Vic’s eye. Let’s catch up with Vic and learn a little about this trending phenom. 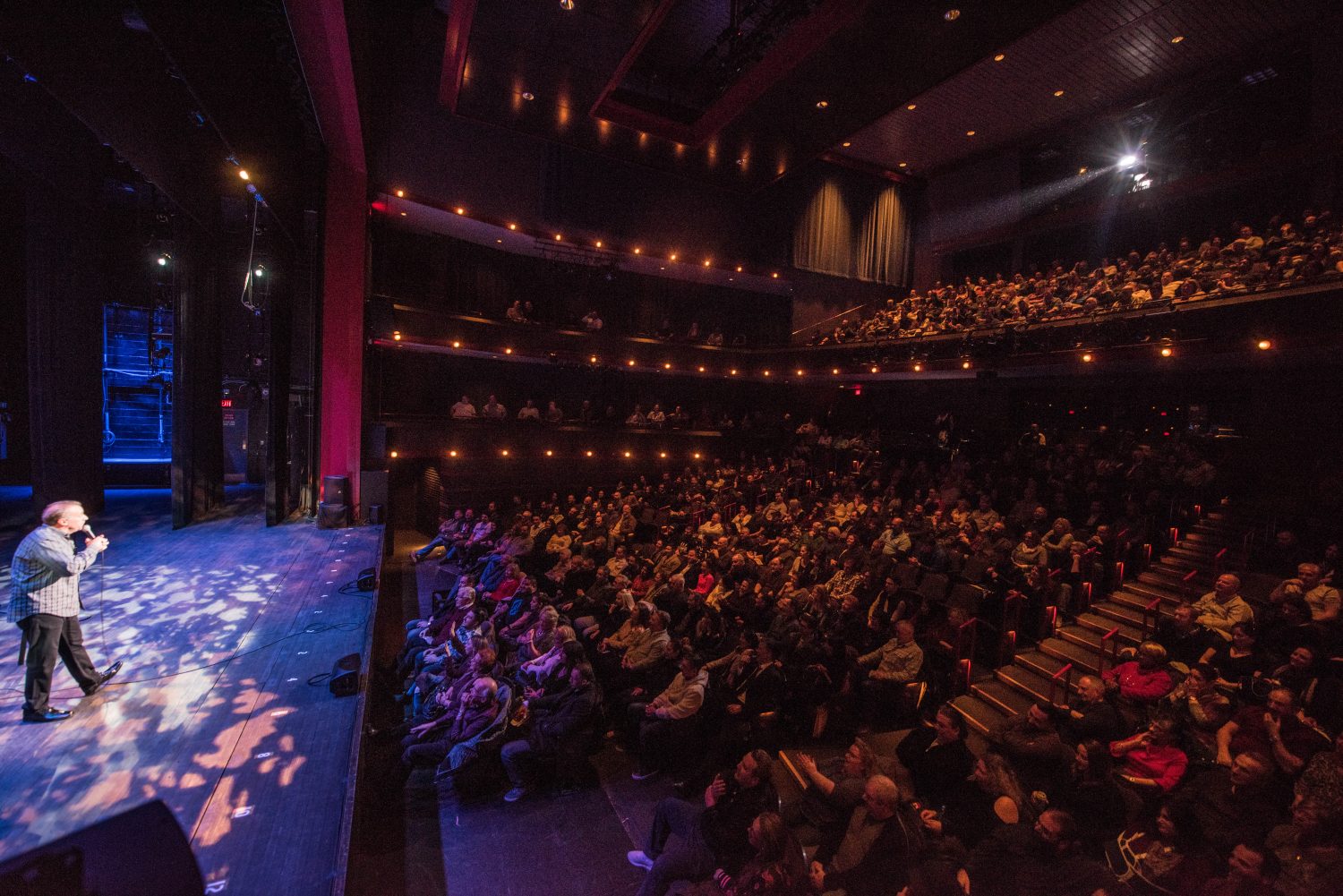 Trending Pop Culture: We’re big fans and are honored to have you here. Thank you.

TPC: Let’s start from the beginning a bit, when did you realize you had a knack for making people laugh? Were you very young or did it come later on?
Vic: SINCE I WAS A KID IN SCHOOL, I MADE EVERYONE LAUGH. IT JUST CAME NATURALLY. THERE WERE A LOT OF CHARACTERS GROWING UP IN BROOKLYN. BETWEEN MY FAMILY AND FRIENDS, THERE WAS A LOT OF MATERIAL TO WORK WITH.

TPC: You grew up in one of the most famous area’s in all the east coast (world), Brooklyn, New York. While cruising underneath the “L” on 86th street, were you practicing your material with your friends? Where you always that “funny guy”?
Vic: AGAIN, IT GOES BACK TO THE FIRST QUESTION. MY FATHER HAD A GREAT SENSE OF HUMOR AND SO I WAS ALWAYS AROUND COMEDY AT HOME. AND MY FRIENDS AND BROOKLYN IN GENERAL WAS FILLED WITH A LOT OF PEOPLE WHO WERE FUNNY WHETHER THEY MEANT TO BE OR NOT. BUT YEAH, I TRIED TO MAKE MY FRIENDS LAUGH ALL THE TIME.

TPC: When was the last time you visited L & B Spumoni Gardens?
Vic: OH JEEZ, ABOUT 5 MONTHS AGO. I HAD LUNCH WITH MY BUDDY WILLIAM DEMEO WHO JUST CO-STARRED IN THE GOTTI MOVIE WITH TRAVOLTA.

TPC: Did you attend college? Kingsbough Community? If so, what was your major? If not, what did you do after you graduated high school?
Vic: COLLEGE? WHAT THE HELL IS THAT? HAHAHA. I WENT RIGHT FROM HIGH SCHOOL INTO MY FATHER BUSINESS….TRASH COLLECTION. I DROVE A GARBAGE TRUCK, A DUMP TRUCK, A BUS AND DID A MILLION BLUE COLLAR ODD JOBS ON THE SIDE TO HELP MAKE MONEY AND FEED MY FAMILY.

TPC: As fans may know, you were a bus driver for many years. A lot of your early video post actually took place on your bus. What was the preparation like for this? Did you plan the bits at home? Or was it ever off the cuff?
Vic: HALF AND HALF. SOMETIMES I WOULD BE HOME AND THINK ‘WOW, THIS WOULD BE A FUNNY THING TO DO”. OTHER TIMES, I WOULD BE FACED WITH SOMETHING THAT JUST SCREAMED TO BE TURNED INTO A VIGNETTE. THAT PRETTY MUCH HOW ALL THE VIDEOS GET CREATED. I EITHER THINK THEM THRU OR THEY JUST HIT ME AND I GO WITH IT.

TPC: Did you (do you) ever run bits by Lucy? What is her input when you’re presenting things to her?
Vic: IN ALL HONESTY, I REALLY DON’T RUN ANYTHING BY LUCY EXCEPT THE STUFF SHE IS IN. I MEAN, COME ON, IF SHES SHOPPING AT HOME GOODS, IM NOT WAITING FOR HER TO COME HOME AND GIVE ME HER BLESSING ON A TONY GAGA SKIT!

TPC: Speaking of your lovely wife, Lucy, when and how did you two meet?
Vic: WE WERE AT A DISCO IN BROOKLYN, I CANT REMEMBER THE NAME, AND I SAW HER AND IT WAS LOVE AT FIRST SIGHT. SHE PROBABLY THOUGHT I WAS AN IDIOT. BUT I WOULDN’T GIVE UP AND WE TALKED AND DANCED AND WE’VE RAISED A FAMILY AND HAD A BEAUTIFUL LIFE TOGETHER. I WOULD BE NOTHING WITHOUT HER. ITS THAT SIMPLE. SHE’S MY ROCK.

TPC: You’ve created so many different characters and regular bits for your Youtube channel. The “Ticked off Vic” is one of our favorites. You seem extremely sincere when you work yourself up to a frenzy sometimes. How much of that is real?
Vic: IF IT WAS REAL, I WOULD BE DEAD. YOUR BODY KNOWS THE DIFFERENCE BETWEEN REAL STRESS AND ACTING. IT’S LIKE EXERCISING. I RANT AND RAVE AND SPIT AND SWEAT AND I GET A GOOD WORKOUT AND MAKE A FUNNY VIDEO. I THINKS ITS SWEET THAT SO MANY FANS SEND ME MESSAGES TO TAKE IT EASY OR I WILL BLOW AN AORTA. BUT THEY DON’T UNDERSTAND THAT ITS ACTING. ITS EXERCISE. ITS ACTUALLY HEALTHY TO VENT AND YELL. JOHN LENNON DID PRIMAL SCREAM THERAPY. I DO TICKED OFF VIC.

TPC: Your video “Bread and Milk”, an absolute classic, currently sits at how many views? How did that bit materialize?
Vic: HERE’S THE DEAL. WE DON’T KNOW HOW MANY VIEWS ANYMORE. HOW CAN YOU COUNT VIEWS WHEN THE VIDEO HAS PLAYED ON EVERY MAJOR NEWSCAST, MULTIPLE CABLE CHANNELS, SHOWS LIKE THE VIEW AND DR OZ AND IT PLAYS EVERY YEAR AROUND THE WORLD. IT PROBABLY HAS A BILLION VIEWS TO BE HONEST. AND TECHNICALLY, I HAVE ABOUT 20 OTHER VIDEOS WITH MORE VIEWS THAT ARE TRACKABLE. BUT IT IS SO SPECIALIZED THAT ITS LIKE A CHRISTMAS CAROL NOW. IT COMES BACK EVERY WINTER. IT’S THE JASON OF VIDEOS. HOW DID IT HAPPEN? I SAW A SNOWFLAKE AND THOUGHT WHY NOT DO A VIDEO ABOUT THE PEOPLE AND THE WEATHERMEN WHO FREAK OUT WHEN THEY SEE THE FIRST DROP OF SNOW. ITS 30 SECONDS LONG. AND WHEN I WAS DONE, I THOUGHT IT WAS STUPID AND WAS GOING TO DELETE IT. BUT I PUT IT OUT AND THE REST IS HISTORY.

TPC: The Bread and Milk WAS your number one video of all time since 2013, but in 2017, it was surpassed with the “Ticked off Vic: Parking Right Here” video. That’s an amazing feat. Again, the materializing for this one?
Vic: THE PARKING WAS A SPUR OF THE MOMENT THING. I COULDN’T BELIEVE SOMEONE PARKED RIGHT NEXT TO ME WHEN ALMOST THE ENTIRE PARKING LOT WAS EMPTY. SO I WENT WITH IT. BUT I HAVE WHO WANTS COFFEE AND CAT VIDEOS, ALONG WITH OTHERS, WITH 40+ MILLION VIEWS EACH THAT TECHNICALLY BLOW BREAD AND MILK AWAY.

TPC: You’ve done some movie work. Do you enjoy being on a movie set?
Vic: I LOVED IT. IT WAS THE HIGHLIGHT OF MY CAREER. YOU’RE TREATED LIKE A KING IN EVERY WAY AND YOU JUST FEEL SPECIAL. YOU FEEL LIKE YOU’RE AT THE TOP OF THE ENTERTAINMENT INDUSTRY. BUT I DO HAVE TO SAY, NOW THAT I AM SELLING OUT BIG THEATRES, THERE IS SOMETHING TO BE SAID ABOUT BEING PICKED UP BY A LIMO AND WALKING INTO A HUGE FAMOUS THEATRE TO A SOLD OUT CROWD WHO ARE STANDING AND SCREAMING WHEN THEY INTRODUCE ME. THAT IS PRETTY-PRETTY COOL.

TPC: Who were you admirers during your learning stages of your career? Does a comedian ever truly “stop learning”? Isn’t it part of the job to always observe and report back? Or is this incorrect?
Vic: WHO DID I ADMIRE? JACKIE GLEASON. RODNEY DANGERFIELD. GEORGE CARLIN. CHEECH AND CHONG. RICHARD PRYOR. NO PERSON SHOULD EVER STOP LEARNING. YES, PART OF COMEDY IS TO BE AFFECTED BY SOMETHING EVERYDAY AND THAT’S HOW AN ACT CONTINUES TO ADD MATERIAL AND CHANGE AND GROW.

TPC: Any fan that follows you, knows you are one of the most humble, appreciative persons out there. You truly make fans feel as though they are taking this beautiful journey together with you. The fans love this. How and why do you feel so many become or are disconnected with their fans and what do you say to those who honestly find it hard to do?
Vic: LOOK, I’M JUST REAL. THIS IS WHO I AM. I WAS A BLUE COLLAR WORKER SO PEOPLE RELATE TO THAT. I STRUGGLED SO PEOPLE RELATE TO THAT. I AM MARRIED WITH KIDS SO PEOPLE RELATE TO THAT. MY COMEDY IS JUST AN EXTENSION OF WHO I AM. A LOT OF PEOPLE JUST FIND ME TO BE REAL AND RESPECTFUL AND CARING. AND I AM. I CARE ABOUT MY FANS. I MEAN, WITHOUT THEM, WHERE AM I? DRIVING KIDS TO SCHOOL. THAT’S WHERE. COMICS WHO ARE DISCONNECTED FROM THEIR FANS OR FIND IT HARD TO CONNECT TO THEIR FANS ARE EITHER DIVAS OR THEY DON’T WANT TO PUT IN THE WORK. JUST MY OPINION.
(See the FAN Zone on Vic’s website to see a snippet of how much Vic appreciates his fans. Click HERE to see it.)

TPC: You are selling out comedy shows across America right now. Did you envision this? What is the feeling like looking out into a sold-out crowd? Do you take it all in?
Vic: I NEVER IN A MILLION YEARS THOUGHT THIS WOULD HAPPEN. I CANT EXPLAIN THE FEELING. MAYBE ITS LIKE BEING A BASEBALL PLAYER AND GETTING UP TO THE PLATE IN YANKEES STADIUM FOR THE FIRST TIME. IT NEVER GETS OLD. AND I AM SO THANKFUL THIS IS HAPPENING FOR ME.

TPC: Where can fans go to chronicle the life of Vic DiBitetto?
Vic: JUST GO TO MY FACEBOOK PAGE. ITS ALL THERE. THEN YOU CAN EXPAND OUT TO OTHER SOCIAL MEDIA PLATFORMS. MAYBE THE YOUTUBE CHANNEL IS BETTER. YOU CAN MORE EASILY SEE MY WORK FROM THE VERY BEGINNING THRU TO NOW.

TPC: Fans want to see where you are playing next. What’s the quickest, easiest way to get this information?
Vic: VICDIBITETTO.NET HAS A TOURING CALENDAR ON IT IT’S THE ONLY PLACE WHERE 100% OF MY DATES ARE LISTED.

TPC: Words of wisdom before you go?
Vic: NEVER GIVE UP. NEVER SURRENDER. EVER. THE AMERICAN DREAM IS STILL ALIVE AND WELL IF YOU WANT IT BADLY ENOUGH.

TPC: Thank you Mr. DiBitetto for your time. As said at the beginning, it’s an honor to have spoken with you. We will continue to watch you and follow your social media pages every day.
Vic: MY PLEASURE. THANKS FOR FINDING ME INTERESTING ENOUGH TO DO A STORY ABOUT ME. I HAVE TO GO NOW AND THROW OUT THE CAT SHIT.