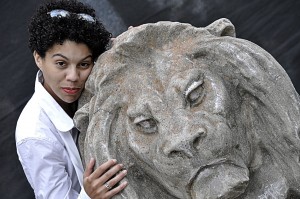 Please pardon the pun, but author, comic book writer and radio host, DCS is taking the world by storm…a crystal storm that is.

DCS (a.k.a. Crystal Storm) admitted to getting “a lot of neat things from my mother, wanderlust is one of them.” She was born in Alexandrea, Virginia in 1980 and graduated high school in Hunterville, North Carolina and attended the University of North Carolina earning a degree in political science with the intent of becoming a lawyer. She obtained a job in records management where she “could make quite the living immersed in converting a corporation’s paper into a searchable tiff.”

However, ultimately she “stopped playing around in Corporate America and got down to the creative business of writing…not just to entertain you, but to fill your brain with concepts and fantastical idea’s that you can apply to the here and now.”

While on her journey to becoming a writer, she picked up a microphone and has been hosting an internet radio show on PSN-RADIO.com every Saturday night which can be heard here and she has conducted an interview or two here (and here) at InvestComics.com.

We caught up with DCS (and called her awesome given-Christian/super-hero name – Crystal Storm) and talked to her about her career.

QUESTION: What attracted you to science fiction?

CRYSTAL STORM: It pretty much happened on accident!

I don’t outline stories first, I start with a general idea, and my general idea revolved around the Terenzio family, a mafia family and some sort of quest to give the people of the world the opportunity to save themselves. Then the story started evolving and writing itself and suddenly I realized I had sci-fi elements in there. 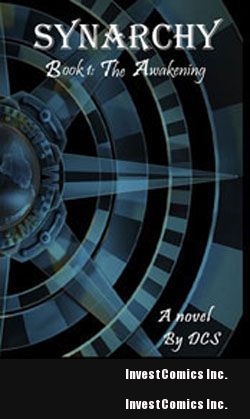 It was a pretty fun realization.

QUESTION: What does science fiction mean to you as a writer or creator?

CRYSTAL STORM: It means a total suspension of disbelief. I think we live in a world where science fiction is slowly morphing into something we can almost take the “fiction” out of it.

For example, UFO’s, life on other planets, alternate dimensions are all things our science right now is beginning to realize the reality of, so it’s a very exciting concept for me, especially because I like to sprinkle bits of truth into my fiction.

QUESTION: As you wrote your “Synarchy” series, was there a book that made you go, “Wow! I want to write a series like this?” For example, in many interviews George Lucas said, he was inspired to do the first three episodes of his “Star Wars” series after seeing “Jurassic Park.”

Meaning, he had the story already in place, but “Jurassic Park” was the spark.

CRYSTAL STORM: There were a lot of books that had information in them that I wanted to impart to my readers in Synarchy.

QUESTION: I get the feeling the term “Synarchy” is a take-off on the word “monarchy,” what does it mean in your world?

CRYSTAL STORM: You’re close but not quite on your definition. Synarchy is actually a term coined by a famous occultist and it means rule by secret government. More in depth, this person believed that beings from the land of Shambala have a hand in world affairs, so I thought it was a very fitting phrase for the series.

QUESRION: How long was the process from when you open up your word processing show to you holding a copy?

CRYSTAL STORM: The first book took me two years to write, because I was working a corporate job while trying to do it, but it was an amazing moment holding that finished copy in my hands.

QUESTION: Now you host your own radio show, what is the difference between that and writing? How does one satisfy you creatively?

CRYSTAL STORM: It’s a huge difference. We writers can be very much hermit-like at times, and with the radio show I’m really putting myself out there. I’m loud and opinionated but its a great extension for my writing. I put a lot of heart and research into the books and the radio show allows me to share topics with a wider audience that I think are pretty interesting and that we need to know about, especially going forward as a society.

I also think I’m too creative at times because they’re both outlets for me and I’m always look for that. I play piano too and that’s another big one.

QUESTION: Same question about comic books, how did you get into them and what does the world of comic books mean to you?

It gives me another avenue to express my creativity. The style is very similar to script writing but a little less rigid, so I’m having a lot of fun with it.

For me comic books are just like short graphic novels, they add an image to what we authors are trying to express and that can be a really amazing thing to see from a creators standpoint. Its watching the words you write come alive.

QUESTION: Do you tend to go for the independent types or do you find yourself reading the Batman, Spider-Man or Superman main stream comics?

CRYSTAL STORM: I’m a very independent type of girl, I’m not just a huge fan of Darkbrain because I write for them, I also like the different approach they’re taking to things.

However, Batman remains my all-time favorite.

QUESTION: What do you think of the self-publishing genre? I know some people have easier times with it than others do, but it seems that self-publishing is becoming more mainstream?

There’s still a big stigma out there, and it’ll take some time for people to get over that hump but technology and largely the internet has moved things in such a way that we authors don’t need someone else to tell us whether we’re good enough or not anymore, we can put our work out there and let the readers decide.

It’s good that we’re no longer restricted by what Random House thinks and its bad because that means we need to be able to bring the same level of quality and professionalism to our works as those big publishing houses do. But that in itself is becoming easier too so I imagine within the next five years or so, the publishing world will look very, very different.

QUESTION: If I can ask an esoteric question, what is DCS about? For instance, it seems that David McCullough is all about writing American history in a variety of ways, Stephen King has been about taking the everyday and pulling the fantastic out of it, what would you say you are about?

CRYSTAL STORM: To me it means, taking the everyday and showing people that it is fantastical. That mundane is a choice, not the reality. I want people to walk away from the “Synarchy” novels, look at their world and see the magic.