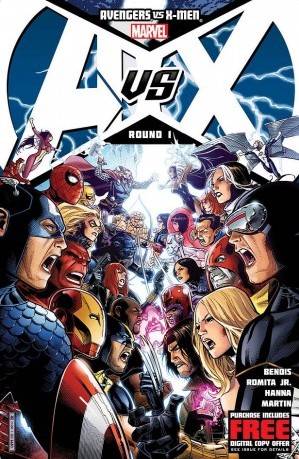 Well if you’re a comic book enthusiast you know by now that Marvel has a book coming out this week that promises to meet expectations of a fantastic brawl. Avengers vs. X-Men #1, or better yet the way Marvel is billing it “A vs. X” will finally come out after a huge build up. The fight is said to reverberate throughout much of the Marvel Universe.  In the end, will this clash between these two colossal teams mean anything within the confines of the MU? Probably a resounding no as an answer here, but we do get to see a great scrap! Anything they may happen in this storyline anyway will probably be “Bobby-Ewing-ed” anyway. Who’s Bobby Ewing? What’s Bobby Ewing-ed? Dallas television show? Google it…..

As any comic collector would probably know, this is not the first time these teams have gotten into a lovers’ quarrel. But there was that 1987 limited series that was a lot of fun. X-men vs. The Avengers (X vs. A). Brought to you by writer’s Roger Stern and Tom Defalco, with Marc Silvestri and Keith Pollard on pencils. Those were the days when readers didn’t expect as much as they do these days. Yes it was the speculation days in comic collecting, but it was still fun to read the story where the hyperbole didn’t set the bar so high to be let down if a story wasn’t that good. In today’s market, with the savvier collector, we expect more from our writers and are quicker to criticize with so much availability as far as social media goes to get your voice heard. Well that’s today’s episode of the soapbox! All kidding aside, pick up the 4 issue limited series from 1987 and get some enjoyment out of reading it. Better yet, pick up the 4 issues, buy the new Avengers vs. X-Men #1 and do a side by side comparison of the 2 first issues! Look how far the industry has come. Or maybe not! If you do the comparison and want to write up a review for InvestComics, send it our way (contact@trendingpopculture.com), we’ll post it! If you do the comparison and use it for your own purposes after stealing the idea from here, be sure to at least credit us. Thanks.

Hulk #50 is a milestone “Bonus” sized issue. Whatever happened to “Double sized” issues? Here we get 48 pages of Red Hulk goodness. So what is the mysterious dark figure following Hulk around? Will we find out in the

issue? Probably not….maybe….does anyone care really? One thing to surely care about is the awesome Walt Simonson Variant cover. That guy rocks. Be sure to click on the cover image to enlarge it. (It’s also featured in the covers of the week below).

Avengers Academy #28 gives fans another go at the Runaways team. With all the hype over Brian K. Vaughn’s recent Saga #1, the Runaways #1 from 2003 was a very well received written book from BKV. That said it’s also their first appearance.

Marvel has a busy week on the Hot Picks this week, right? It doesn’t stop with the release of the much anticipated Secret Service #1 from superstar Mark Millar and legend status Dave Gibbons. These two creators better deliver the goods with this series. Very high expectations here…..remember the social media critic’s we spoke about earlier?

Voltron Year One #1 from Dynamite Entertainment makes its way into your shop this week. Check out the very firstVoltron comic ever in Voltron #1 (1985) from Modern Comics. Ape Entertainment releases Ramiel Wrath of God #1 from writer Javier Grillo-Marxuach of the Lost television series.

Scroll through the covers of the week below.