So I guess I shouldn’t have sold my graded copy of The Walking Dead 1 (CGC 9.8) a few years ago. Currently there is no comic property seeing more gains than Kirkman’s epic Zombie adventure. You may think you know all the best Dead titles to collect but there are still some gems you might have overlooked and I recommend buying them all (along with some other important Image books!)

Click on the RED links to BUY/BID right from the article.

This Image series reprints the original series on a weekly basis and has turned out to be just as hot as the regular series.  Issue #1 is the prize but they are all wise investments.

Ebay sales are up to $60.00 for issue number one having been observed!

The Last Page of this comic was printed twice and limited to a print run of 900. It is believed that none made it out to the public but if any surface they are sure to be one of the rarest Walking Dead issues.

This 2010 reprint was made available to the public for only a dollar!  Now they are just as hard to find as all the others.

In 2008 this variant reprint of issue #1 featured some added bonuses and has since become quite difficult to find in the back issue market.

Internet sales of this series have exploded.  The AMC series is an oblivious hit and with the appearance of Michonne in the season 2 finale things have gotten out of control.  Copies of this have seen huge price increases and are all but extinct on the back issue market.

Even the reprint of Michonne’s first appearance is insanely difficult to find! 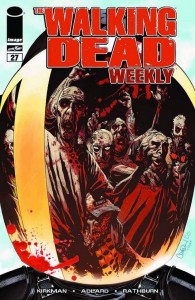 Michonne’s first appearance and the announcement that the Governor will be in season three have generated back issue buzz in this book as well.

Kirkman wrote some other titles you may not remember. Capes #’s 1-3 were ok but issue #1 features the true first appearance of The Walking Dead with a preview in the back!!

Another forgotten Image title, issue #6 of this series also sports a preview of The Walking Dead.

BLUE CHIP BOOKS OF THE MONTH

Normally when Hollywood adapts a comic property the back issue market for anything related sees movement in a positive direction even if the movie doesn’t hit big.  In this case John Carter was so bad (gross wise) that the opposite has happened.

These issues along with many other John Carter Comics have either seen no price increases or losses. John Carter is a character of true worth and many of his appearances offer great art and writing making them truly valuable.

John Carter of Mars (Marvel) #18 (First Frank Miller Marvel Art! and there is also a Mark Jeweler Variant of this book!)