Okay so for the first time in InvestComics’ young history; we simply could not make it to the Miami SuperCon. Simply put, automobile died! Heard it was a fantastic show as usual, but we’ll have to turn that page and focus on the New York Comic Con! Love this show for 2 reasons. One, it’s a great show and 2 it’s my hometown! Click on the above to be linked to this incredible show.

There was a recent secret project announcement from Marvel Studios regarding a movie that will be appearing in a few years. That announcement was the Introduction into the Marvel’s Cosmic Galaxy. Guardians of The Galaxy will be the team to kick of Marvel’s neglected Universe. Here’s the thing. If you’ve been a weekly reader of the InvestComics Hot Picks, you would have read that this was going to happen! True, no lie! Check out the Hot Picks article from April 21 2010 right HERE and then check out the calling of the Guardians of the Galaxy movie in the August 8 2010 Hot Picks HERE. Yes of course we have picked lemons too, but when we call something right, it’s fun to point it out!

Hope you enjoyed the 2 part Amazing Spider-Man special. It was a lot of fun to put that together. More like that coming your way soon with the release of the Batman and Superman movies. But for now we go to our regular scheduled program. 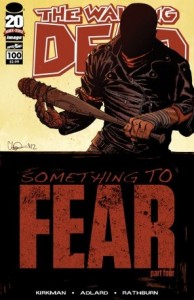 All the talk this week is about one comic book. A comic book that flew under the radar for a little bit, but cultivated into a huge success to say the least. It spawned a television show and now it has reached its own milestone status within the comic book collecting industry. That book; The Walking Dead #100. Now with all of the hoopla surrounding this series, let it be known that any collector spending thousands of dollars for a high grade number one issue is probably not making a wise decision. Yes the series is “hot”, yes the television series is “hot”, but where will the series in both realms here go once the boredom sets in? Or once the series reaches its pinnacle, many will probably walk away. Newsflash here, this comic will not be Amazing Fantasy #15 or Iron Man #55 for that matter. Yes it’s a well written book, it’s a fantastically well rounded book actually, but is it well enough to sustain that monetary value over the long run? This collector doesn’t think so. If you’re in the market looking for a book to invest in as far as your collection goes, save your money and get a high grade aforementioned comic like Iron Man #55 (First Thanos).

So with the release of the milestone issue here comes the massive hyperbole of variant covers. Ten covers at last count. That’s absurd, but it is what it is. The absurdity could work in you favor though! If you want to make a quick buck get your hands on a high grade Retailer Incentive Charlie Adlard Cover, slab it and throw it on EBay. It’s a no brainer that you will most likely double your cash from the $250 you originally spent getting this book in the first place. Triple or more if your grade pulls a 9.9. Easy cash here. Not money wisely spent by the buyer of this comic on EBay, but shhhh we won’t tell them.

Chew fans have something to celebrate this week. IDW releases their first spin off of their wildly popular series this week. Chew Secret Agent Polo #1 will sell out quick, expect inflated aftermarket pricing by Saturday after this comic comes out on Wednesday. If you buy into it, flip the comic sooner rather than later. If you want to make a nice pairing to sell, put together Chew #8 (first appearance of Agent Polo) and this number one issue. Watch as the bidding goes up and up.

IDW also greets us this week with another number one issue to check out. The Crow (Vol 4) #1. The Crow’s first appearance of course comes from Caliber Presents #1 from 1989.

Scarlet Spider #7 brings in a new creative team that includes the artistry of Khoi Pham. One of the more enjoyable things about collecting comics is that we as fans can watch creators hone their craft. It’s like watching that childhood sitcom star grow up to become…..well not such a big star, but it’s quite the opposite 99% of the time with comics. Check out one of Khoi Pham’s earliest (if not first) Spider-Man work in What If? Spider-Man The Other #1 (2007).

This week, Batman #11 wraps up one of the most outstanding storylines in recent memory, “The Court of Owls”.

A few number one issues coming your way this week that should be checked out,  Punk Rock Jesus #1, Hoax Hunters #1 and Enormous #1.

….And what’s with DC’s cover of Resurrection Man #11? Boy that character looks familiar. Did he show up to the wrong company?

Before we go, InvestComics would like to point out 2 very cool sponsors to the website. Bags Unlimited Inc. You can find ANYTHING you need on their website for your storage and preservation needs! They are affordability priced and there isn’t anything they can’t get for you! Also check out FanPan. This site allows you to take surveys and win stuff!! Your opinion on the pop culture front counts and for that you could be a winner of some very cool stuff! Check out both of these sites by clicking on the names.

That’s it for this week. Remember that every Sunday InvestComics Hot Picks hits the website!

Scroll through some of the covers of the week below.