Welcome to one of the most comprehensive Hot Picks list to date from InvestComics. Last week we all witnessed the rebirth of the new DC Universe with only 2 new releases. This week DC goes with 13 titles, and InvestComics will give you the low down on each title. First appearances, Number one issues, and the collectors price for these gems. So sit back, get the check book, plastic, or cash whichever you choose and buy some of these very affordable comics. (And a special thanks to Comics Price Guide.com for providing the pricing) 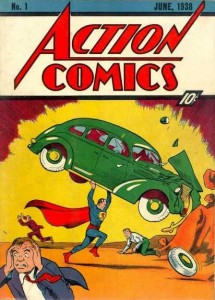 Where to begin? Well let’s start with the Mecca of all comics, Action Comics #1. Some 73 years ago, most of our grandparents/parents were witness to arguable the greatest Superhero and First Lady of comic books in history; Clark and Lois. Action Comics # 1 from 1938 sold for $1.5 million dollars (yes you’re allowed to put your pinky to your mouth and say, with your best Evil accent “1.5 million dollars.” It’s okay; no one is watching….go ahead.) So let’s stick with a theme here and go from High to low.

Detective Comics #1 – Where there is Superman, Batman shouldn’t be that far behind. In this particular case he is. (We await the Batman #1 release where Bats catches up quickly!). Ask any collector a certain issue number and they will instantly know what it is. In some cases, you can give a collector just a number and they will know what you’re talking about. With Detective Comics, you have just that. Everyone knows about issue #27, but ask a collector what the cover looks like to Detective Comics #1 1937 and they may stall a bit. It’s an awkward cover isn’t it? You want some beauty? Okay how about the cover relates to one of the nine plus stories in this book called “The Streets Of Chinatown” written by Jerry Siegel and pencils by Joe Shuster? Yea, “those 2 guys”. The two JS’s also have another story in here called “Part 1”. One of the great things about this $100,000 Joe and Jerry comic is that it predates Action Comics #1!

Green Arrow #1 -The next comic up for bid at $36,000 would be More Fun Comics #73 from 1935. If calculations are correct here, that means that 3 years prior to Superman (and Lois) making their debut, Aquaman, Speedy and Green Arrow all did in the same comic, but yet it cost  1.4+ million dollars less. Further proof that yes Superman is a badas*.

Swamp Thing #1 – One of the, if not THE greatest horror artist of all time had a hand in creating this Swamp Thing character. Mr. Bernie Wrightson. Swamp Thing is one of those characters that never seemed to find his footing (maybe it’s all of those twigs) in the DC universe. Or so it seems that way. Coming in at $1200 is Swamp’s first appearance in House of Secrets #92 from 1971. Not a bad buy if the Swamp Thing would ever get a big budget film like he deserves. Otherwise this comic will probably remain at the pace of a slow climbing valued comic for a long time.

born on paper by an awesome artist; Carmine Infantino. But, very much like Swamp Thing, Animal Man needs a “place” and maybe, just maybe Writer Jeff Lemire and Penciler Travel Foreman will bring it. A very non-animal collector’s price of only $260 for this first appearance. You won’t get rabies if you buy at $200 plus, but as it applied to Swamp Thing’s first appearance, it’s a slow mover. Think of it this way, this comic is 4 years away from becoming a 50 year old book…..

Batgirl #1 – Written by Gail Simone, Pencils by Ardian Syaf, and a cover by Adam Hughes probably will equate to big sales for this comic. All rejoice! Barbara Gordon will be making a comeback as Batgirl! Catch her first appearance in Detective Comics #359 1967 valued at $240 (penciled by Carmine Infantino!). Batgirl will make some noise, and will be a force in the DC Universe. Look for the Detective Comic to gain a little bit of steam, much more so than Animal Man and Swamp Thing.

Hawk and Dove #1 – The last of the “upper level” spending list. Hawk And Dove first appeared together in Showcase #75 1968. It’s only $200. A $200 comic with a first appearance from Steve Ditko. Is there anything left to say here? Yes the comic is 43 years old and only worth a couple of hundred bucks, but we’re talking about a legend here debuting new characters that have a relaunch comic coming out, add to this the potential of a movie one day, and you have a collector’s item. Buy this.

Coming in at the $16 mark; Men of War #1 1977, and Omac #1 1974. Both of these comics hold some promise, and In case you haven’t heard (no bird bird isn’t the word) the Bronze Age is the way to go as far as collecting comics go. An era still poised for some serious upside. Omac #1 1974 for example, Jack “King” Kirby draws the origin of Omac. Men of War #1 1977; written by David Michelinie. So put that variant cover of Spider-Island back and get one of these books.

For $5 you can get the first appearance of Justice League International. Or you could possibly find one in the long boxes at your local convention for a buck. Look for Justice League #1 from 1987 for the 1st JLI. While in those long boxes, move over to the 50 cent boxes and look for Static #1 1993 (the late great Dwayne Mcduffie), and Jim Lee’s Image title Stormwatch #1 from 1993. Then after that, move on over to the current books and grab Batman Incorporated #5 for cover price. The African American Batwing makes his debut in there. He’s also making the cut in DC’s relaunch with Batwing #1.

Okay with that out of the way, be sure to scroll down to the bottom of this article and check out all of the covers to the NEW number one issues DC is offering up.

Here are the rest of the comics to check out this week.

Until next week, Invest wisely