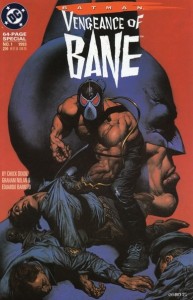 …..And now the third and final installment of the Batman Checklist. This is my personal favorite, such a variety of comics. In no particular order, lets jump right in shall we?

No particular order except for the first comic here. The 3 part Batman Checklist hones in on the Dark Knight and all of his adversaries, but the main event happens on July 20th in theaters everywhere. Batman vs. Bane is going to be an epic movie no doubt.

Simply put here. Bane is the equivalent of Spidey’s Venom. Bane is as important a villain within Batman’s world as is Venom is Spider-Man’s world. Actually, these 2 villains are the most important thing to happen to their respective comics when they first arrived on the scene and continue to be a force. This isn’t about Venom though, this is about Bane. He’s now appearing in a second Batman movie for a reason. Yes we all know the first Bane movie doesn’t count. But deny all you want, he’s there! Bane has become the modern era Joker. Yes the Joker is the Prince, but Bane is the King.

Vengeance of Bane – Here it is fans, the reason why the Batman Rises movie will be so epic. This dude is going to bring it………the first appearance of Bane.

New York World’s Fair (1940) – This beauty of a comic has the dubious distinction of being the first time Superman, Batman and Robin ever teamed up. A cool $15,000 makes you a proud owner. 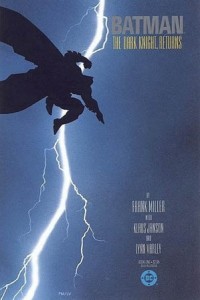 here. This series puts the “Dark Knight” into the Dark Knight. If for reasons unimaginable that you do not own this series to some capacity, be it trade, 3rd printing individuals or the originals…..well you’re not a Batman fan or a comic collector.

All American Comics #61 – The first appearance of Solomon Grundy.

Batman and the Outsiders #1 – A neat 80’s series written by Mike Barr and drawn by legendary Batman artist Jim Aparo.

Batman and the Outsiders #22 – This little nugget contains the first work by creator Alan Davis.

Brave and the Bold #75 – This comic came out the same month as Neal Adams’ first Batman art ever in Detective Comics #370…..so technically this would be Neal Adams 2nd Batman art, but definitely worth noting here. Neal Adams is obviously a legend and when he drew Batman, he raised the bar and set standards that many artists today still emulate.

Justice League of America #1 – Of course Batman had to join a team eventually right? Here’s the most famous team of all with Batman in it. $20,000 gets you ownership rights on this one. Now if Warner Brothers could just get their act 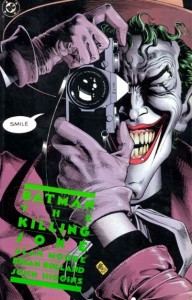 together and get rolling with some movies…..but that’s another article, another time.

Batman: The Killing Joke – Okay so let’s do another comparison here. The Dark Knight series (Frank Miller) is to the Batman character in comics as is The Killing Joke is to the Joker character. No matter how many Greg Capullo’s you pull out, Neal Adams, Jim Starlin’s…etc. Batman: the Killing Joke will ALWAYS remain THE Joker book. With names like Alan Moore and Brian Bolland on this comic, it’s a no brainer to already have this comic in your collection. You do have this in your collection, right? If not, refer back to The Dark Knight #1-4.

Superman #76 – This is the first time Batman steps inside of a Superman comic.

Superman/Batman #1 – And staying with the Superman theme here. This wildly popular series debuted in 2003. Written by Jeph Loeb and drawn by Ed McGuiness.

Batman: Sword of Azrael – First appearance of Azrael and Joe Quesada art on the entire series!

Batman: The Cult #1-4 – A four part series with names like Berni Wrightson, Jim Starlin and Bill Wray attached to it. What more does one need here? 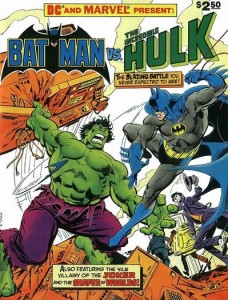 Hulk vs. Batman – The most shameful part of these fantastic collector’s items are that the newer collector will probably never get the joy of having an oversized comic like this come out, let alone a Marvel vs. DC character! Egos are running at an all time high and the unfortunate part with this is that the fans won’t get to see or feel that excitement of big time characters facing off.

Spider-Man and Batman – Will we ever see something like this again?? Creators; DeMatteis, Bagley, Hanna and Farmer bring these two icons together.

Batman and Captain America – Again, we will probably never see the likes of this again. AND by John Byrne?!? Yes, very awesome. 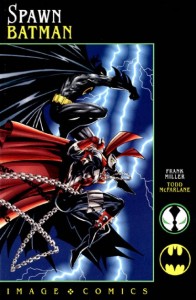 Spawn/Batman  – Image Comics throws their hat in the ring with their flagship character at the time. Creator’s Todd McFarlane and Frank Miller bring this comic to life. Spawn, Batman, Miller and McFarlane?? Yes it really happened.

Superman & Batman vs. Aliens & Predator – Dark Horse gets into the team-up act with their best franchise at the time. Place you bets kiddies, you won’t be seeing this again anytime soon. Mark Schultz and Ariel Olivetti on this comic.

The Batman team up comics may not be the most riveting stories of all time, but they were meant to feed into a fanboy’s geek dream of seeing something “outside the realm” of the same old mundane team-ups. They did their job in the respect that they brought enjoyment and at the end of the day they entertained us all. And they continue to do so today.

………….so when is that Superman movie coming out?