***InvestComics Publications Facebook page will be seeing some more action as the summer release approach’s. If you haven’t seen the new banner on the page, done by the awesome talent of David Whalen, click HERE and bounce over now. LIKE the page because there will be some cool things coming out of the Invest Pub camp. David is the creator of the first comic to ever be published by InvestComics Publishing; The Dawning. Exciting times ahead!***

…Each and every week the IC Hot Picks brings the fan an almost certainty. A book that will breakout or be on the verge of a major or sometimes minor uptick in the aftermarket. Whether it’s a Bear market (sell) or a Bull market (buy), InvestComics has your back. Hopefully many of you heed this professional advice and pick up the recommended comics at your local shop. Yes the digital age is nice, but your local comic shops are the reason we all love comics. Support your shops fans, it’s important. There is room for everyone on this ship.

So what certainty does the InvestComics Hot Picks have this week you may ask? How about Invincible? If by some strange non-apparent reason you have been living under a rock for the past 10 years or so, Invincible is essentially the modern day Peter Parker. You talk about 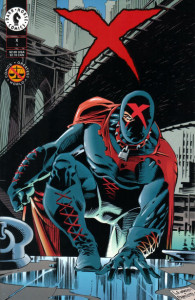 breakout potential? This character; Mark Grayson is it. With that said, the release of Invincible Universe (2013) #1 this week will prove once again that this Robert Kirkman character is to reign supreme. How much longer before we see Robert’s character on the big screen? Television? Not so much. Invincible would not bode well on the tube. On the big screen is where he belongs and WHEN he does, look out. Yes, look out for Tech Jacket #1 (2002) for his first appearance to explode in the aftermarket when Grayson finds his way to the movie theater.

On a much smaller scale this week fans will see X (2013 Dark Horse) #0 sitting on the new release shelf. Although Killer X from Dark Horse is not as well-known as Invincible, the character stands to be a bad ass if he catches on. His first appearance was in Dark Horse Comics #8 (1993). In 1994 X appeared in his own self-titled book which lasted only 25 issues. The number one issue featured Rick Leonardi on pencils and Jimmy Palmiotti on inks. Don’t let this comic slip through your hands this week; Dark Horse’s version of Batman is here.

InvestComics told you about sex. No not the birds and the bees, but Sex #1 from Image Comics. Was it the lure of the title that made the first comic sellout so quickly that it’s now going to a third printing? Well all indicators’ point to this NOT being the case. Crappy stories in today’s market do not go back to the printer that often. The 90’s maybe, that’s a different story. In today’s market, fans and collectors are much wiser; they’re not going to be fooled with the prism/die-cut cover anymore. It’s about substance, about what is in the middle of your ears. Any of the hype issues; death or the president on the cover will eventually wane. So are you in the mood? Feeling frisky? Don’t miss out on more sex with Sex (2013 Image) #2 out this week. Remember, the story must sustain here to remain a hot book. No reason not to think that will not happen though.

Avenging Spider-Man (2011) #19 has its attention on the Sleepwalker character. The appearance of this hero will not boaster sales at all for the Avenging Spidey title, but it will add to an interesting story. We hope. If one feels so inclined to look for Sleep’s first appearance; one can find it in the 25 cent box at your local shop or comic convention. Look for Sleepwalker #1 (1991). Sweet dreams!

With the Iron Man 3 movie hype fast approaching, Marvel brings us Secret Avengers (2013 Marvel) 2nd Series #3. Why is this relevant to the new movie? Why it’s the “deadly new secret” of the New Iron Patriot. Yippee! Iron Patriot first appeared in Dark Avengers #1 (2009). And you already own that book…..right?

Check out the 11 Hot Covers this week below.

Also, sign up to receive the InvestComics monthly newsletter below! You’ll become instantly cooler once you do. For real.