(Disclaimer: all comic recommendations are from a speculative vantage point. Not all comics are to guarantee a return on your investment. This article is used as a guide for investments and entertainment purposes. Please use your own discretion when investing.)

Don’t forget about the contest going on regarding the Villains United #1 signed by Gail Simone. It can be yours if you share the video link on Facebook and let us know that you’ve done so! You’ll immediately become eligible. Simple as that! Here I’ll make it even easier for you, click right HERE to get to the Gail Simone interview video and also check out the actual signed book you could win! Share and you could win! MORE contests upcoming….stay tuned.

Shaun Cobble of the Breaking the 4th Wall podcast which appears on the InvestComics website has started his own column on the IC website called Start Me Up! This awesome weekly article will feature picks from Kickstarter projects that are deemed necessary (by our standards) to have your attention. No project too big or too small for this column. Shaun Cobble does a tremendous job of bringing this article to life with detail and links so that the fan can contribute (or maybe not) to the Kickstarter project pick for that week. If you have a Kickstarter that you want featured or know of one that needs attention, email us at startmeup@trendingpopculture.com. Who knows, maybe YOUR project will be featured next!

With a slightly heavy number one issue week, there are a few that call for one’s attention. If you sleep on them, they will sellout and you’ll be left pondering what if? Well maybe not that dramatic, but you will be saying something like ‘why didn’t I listen to InvestComics?!’ One comic that heeds your calling is called Movement (2013 DC) #1. Here’s the scoop on this comic. This book includes the government, revolt, greed, corruptness and super-humans. Yes it’s going to be a super ride indeed. The kicker here as to why it will be a story like no other is quite simple. Gail Simone is writing it. This alone is enough to not only make it an interesting read, but a probable sellout will occur. Get your copies early.

The second comic to look for this Wednesday has to be Ten Grand (2013 Image) #1. Much like the aforementioned, this comic has creative star power as well. Writer J. Michael Straczynski along with artist Ben Templesmith bring us a story of love and death, literally. This book will indeed sellout folks, do not miss it. If you procrastinate you will be waiting a few weeks for a second print to read while you pay a 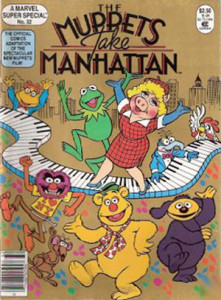 possible premium in the aftermarket for the first print. Don’t say InvestComics didn’t give you a heads up on this one.

There is an amazing thing happening this Wednesday according to Ape Entertainment. It actually took 44 years to happen. Sesame Street will be a comic book for the first time ever! Hard to fathom isn’t it? While to claim to be a “first” does hold water, it really isn’t the first time the gang has appeared in a comic book related atmosphere. Big Bird, Bert, Ernie, Kermit, Miss Piggy, and a host of others first appeared in Marvel Comics’ Marvel Super Special #32 (1984). It was a magazine, not a comic, but printed by a comic company. So technically they appeared in a mag first, it was in fact reprinted in early 1985 in comic book form though. There is a fabulous reason why a collector should have this in their stash too. Ready? Legend Jim Starlin was the writer on this comic. Yes, THAT Jim Starlin. So does Ape Entertainment have a true claim here of a first? Well yes and no. It’s the first Sesame Street titled comic book ever, but the characters have appeared in the pages of Marvel already individually. Kudos to Ape Entertainment for getting the first Sesame title out though!

Black Bat (2013 Dynamite) #1 is based on the 1930’s hero. The story from back in the 1930’s says that Batman and Black Bat were so similar that lawsuits started flying, but quickly settled down, thus creating a happy world for both characters to co-exist. I wonder who came out ahead. Anyways, check out the new take on the Black Bat this week. Who knows maybe we’ll get a Tim Burton Black Bat movie one day.

Previously mentioned in a recent InvestComics Hot Picks, Mister X was a big deal back in the early 80’s. The number one issue called for a nice premium in the aftermarket. These days are a bit different though for Mister X in the back issue bins. However, with the efforts put forth in today’s climate of trying to get that next movie deal, one never knows when a new beginning may if ever hit it big again. So with that said, check out Mister X Eviction (2013 Dark Horse) #1 this week and make your own call on whether THIS is the time again for Mister X. His first appearance came from Vortex comics in Mister X #1 (1984).

With the Iron Man 3 movie coming out next week, what better time than now to tell a NEW secret origin of Tony Stark with Iron Man (2012 5th Series) #9. A bit strange how Marvel works sometimes. Sticking to topic here, Thanos Rising (2013) #2 continues the awesomeness of Thanos’ origin. (Iron Man #55, buy it, still not too late! InvestComics had this comic as a buy in its very first issue of the InvestComics magazine more than 6 years ago and continued for years telling investors to buy this comic. Hope you listened.). Age of Ultron (2013 Marvel) #7 continues on the path of creating a new Marvel Universe, but the cover strikes similarities to Secret Wars #1 doesn’t it? Well so many covers do these days, but just sharing a thought about the cover. Scroll through the Hot Picks covers and see a side by side.

That’s it for this week. Be sure to sign up to the InvestComics Newsletter. You’ll become instantly cooler. True story.