From the looks of it on the social media circuit, Halloween ComicFest was a success. Was there any doubt it wouldn’t be?? Kudos goes out to all of the comic shops across the states that participated in this year’s event. Free comics will always be a good time!

And while on the topic of comic shops. InvestComics would like to direct your attention to a few comic shops that are now carrying the very first InvestComics Publications comic book The Dawning #1 in their stores! How cool is that??! Click on the stores that have the link attached to them and friend them on Facebook now. Super-Fly Comics and Games, Epic Loot Games and Comics, Dark Star Books, Sanctuary Comics, and Cards and Comics! Go now and support their Facebook page and their stores! More comic shops will be listed as they jump onboard to support the InvestComics Publications launch. Thanks guys/gals! If you’d like to purchase this hot book right now, click right HERE to purchase your copy now!

Lost in all of the hoopla of the New York Comic Con and the launching of the publication is the contest we have going! Check out last week’s InvestComics Hot Picks #191 for more details on that. Enter to win! If you don’t feel like jumping over, the prizes are for a Batman The Dark Knight #23.4 Joker’s Daughter #1 SIGNED by artist Georges Jeanty and Excalibur #1 SIGNED by legend Chris Claremont! Share InvestComics everywhere and WIN!

Over the past week, InvestComics has been posting various videos from the New York Comic Con. Check out comedian/late night talk show host Pete Holmes right HERE. You MUST check out Pete’s Youtube page to watch his hysterical takes on Batman/Superman, Wolverine, and Gambit, priceless. Also posted were WWE stars and President of the WWE Studios right HERE, and Animal Planet’s team; Finding Bigfoot right HERE. Stay tuned for the animated team of Bob’s Burgers (hit show on Fox), and Stan Lee!! That’s right; Stan Lee will be coming up very soon!

Okay, so let’s talk about some comics……

There was a comic book run that basically changed the landscape of comic books as we know them some 24 years ago. That comic book run was DC’s (Vertigo) Sandman from 1989. The ebb and flow of storytelling in comic books were changed forever in 1989. This was due for the reason of one man, Neil Gaiman. Neil is a storyteller; he has a pulse on what the reader yearns for. He sets moods, changes, flow and so much more. There are not enough words to describe this man’s legendary status. And quite frankly he doesn’t need words; he’s done enough for himself to establish his legend status in the comic book genre and in the publishing world as well. This week Neil visits familiar territory. Yes that’s right you guessed it, Sandman. Sandman Overture (2013) #1 will probably not break new ground, but what it will do is spark the interest of readers and collectors alike. Then again, maybe it will break new ground? Who knows with Mr. Gaiman? Here’s the nuts and bolts here folks, DC has spoken of Vertigo titles making it onto the big screen for a while now. What better way to start than right here, with Neil Gaiman’s Sandman? There have been many predictions within the InvestComics Hot Picks that have come to fruition (some not too), but to say that Sandman will definitely make it to a movie theater is not that far of a stretch, but it WILL happen. Sandman will become a film one day, and not only will it be spectacular, it will send the aftermarket into an absolute frenzy. This is why a collector should be on top on the 1989 Sandman #1 comic right now. Another book to be on top of is the Sandman Overture #1 variant from Dave McKean, a cool $125 for that variant, but can easily double with a 9.8 grade, and triple with a signature series. Not only will the Sandman Overture #1 heighten the interest of the already famous 1989 book, the movie to come will catapult it even more so. Thank me later. Don’t forget to let everyone know that InvestComics alerted you out on this one.

The recent “demise” of Damian was short lived and now the character has his own book coming out! Death in comics really doesn’t mean much, but you know this already. Anyways, Damian Son of Batman (2013) #1 will bring back the son of Bruce for a limited series, and then for sure a regular series down the line we’re guessing. Whether you’re a fan or not of the Damian character, one will have to stand up a bit and pay attention here. The character is a hot commodity, the collector should embrace this. The reader should just ignore him if they aren’t interested. The collector’s battle over the true first appearance of Damian rages on behind the scenes, but here’s the skinny. The only true answer lies within the money if you’re a speculator. The birth of Damian happened in Batman: Son of a Demon #1 in 1988 (not in DC continuity? Then maybe it is?), but according to the folks at CGC, they say that Batman #655 (2006) is the recognized cameo of Damian. The first full appearance of Damian is Batman #656. So with that, regardless of how the argument may want to flow, CGC is setting the precedence on the Batman comics #655 and #656 as the cameo and first, and this is where the money is going to be found because of the little inscription on the top of the casing. Buy the first Damian. It’s an uptick comic for years to come. Oh yes, one last thing. Pick up the Damian Son of Batman #1 Andy Kubert sketch variant at $60, grade it make money, simple as that. And finally from DC Comics this week, Forever Evil Argus (2013) #1 is sold out. The Forever Evil campaign continues to kill it on the shelves, well semi-disappear really. As the previous InvestComics Hot Picks have stated with the Forever Evil storyline, unless there is a major holy sh*t moment that really takes the genre by surprise, there will be no redeeming value (speculator) in any of the Forever Evil titles down the line. The true redeeming value here is a fantastic storyline. 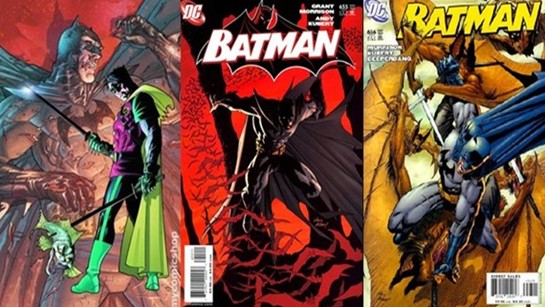 Marvel Comics stays busy this week with comics like Captain America Living Legend (2013) #2. This book will introduce an alien like thing. Not sure exactly what, but check it out. And look at that awesome cover too! Dan Slott promises that the new Superior Spider-Man (2012) #20 will seriously shake things up. As if things haven’t been shaken already?! Be sure to grab a copy to see how things are playing out. Another shake up looks to be occurring in Guardians of the Galaxy (2013 3rd Series) #8. Peter Quill will betray the entire Marvel Universe? Okay we’re interested. Cataclysm (2013 Marvel) #0.1 would be nice to write about, but the Marvel solicit is “classified”. The variant is sold out though, know that much! The new Bryan J.L. Glass Thor Crown of Fools (2013) #1 will be sold out on Thursday. Be sure to have your copy in hand or in your pull box.

Ash and the Army of Darkness return this week in Ash and the Army of Darkness (2013) #1 from Dynamite Entertainment. Talks of a new movie will boost interest for the original Ash and the Army of Darkness #1 from 1992. That’s 21 years ago. Feel old yet? The comic is mostly sold out across the board. Archie Comics had a huge success with the recent Archie zombie book Afterlife with Archie #1 (InvestComics informed that you’d get the variants, hope you did!). So what’s next to come you may ask? How about Fox (2013 Red Circle) #1? Yep, the Fox is running amuck and its best you catch it! Preferably the variant! Fox #1 is another hot comic folks. Don’t believe it? Check by Friday and see if there are any variants left for you. Oh yes, check Ebay on those, they’ll be over there probably. Incidentally, in case anyone is interested. Fox first appeared in Blue Ribbon Comics #4 way back in 1940. Good luck ever seeing that comic in your lifetime in near mint condition or in your lifetime period. There are a few comics that should be on your radar due to the low number left or their sold out status. Wildwork (2013 Antarctic Press) #1, Adventure Time Spoooktacular (2013) #1,and Wilder (2013 Monsterverse) #0.

Amazing artist Marc Silvestri pays homage to himself this week with the cover on Witchblade (1995) #170. If the cover doesn’t ring a bell (How could it not??!!), it’s original concept cover was featured on the Uncanny X-Men #251 with Wolverine stuck on the X and not a W. Awesome cover on both Marc!! See below to marvel in the beauty.

That’s it for this week. Be sure to share InvestComics across the social media because not only is it cool to do, but you can win some awesome prizes too! Batman The Dark Knight #23.4 Joker’s Daughter #1 SIGNED by artist Georges Jeanty and Excalibur #1 SIGNED by legend Chris Claremont!!