NEW InvestComics Hot Picks every Sunday! Giving the Speculator an Edge Since 2005! – www.trendingpopculture.com

Publications Facebook page to discuss The Dawning and to catch upcoming projects from IC Pub. Click HERE to be directed there now.

Don’t forget, in association with Ratchet City Comics; The Star Wars #1 (Dark Horse) CGC signature series comic signed by Brian Wood is still up for grabs if YOU help us get to 3000 Likes by Christmas! Share the InvestComics Facebook page everywhere (let us know you did so) and once we reach 3000 (by Christmas Day), you may win! What a fantastic way to celebrate the holidays. Share, share, share!

There are an abundance of comics to check out this week. The list is long, but the week is very soft. That said I’ll be sure to let you know which comics to put your emphasis on. Not much here, so look for those back issues.

One standout comic this week could be Nova (2013 5th Series) #10. Last week with the mention of Nova #19 (1978), many fans were very puzzled by this. I received a few messages on the board, Instagram, and personal email saying “Nova? Really?” Yes Nova, really. If you haven’t been paying attention, let me fill you in a bit.

Marvel Studios are about to embark on a whole new universe of pictures and change everything. Yes they are going to change the way movie goers watch “space/cosmic” films with the release of one film; Guardians of the Galaxy. What this particular film will do is open up the flood gates to introduce Marvel in space; their Cosmos if you will. Yes the film will have to fare well in order for the initial steps to be taken, to progress. If all goes well (which it should), Marvel Studios will be on their way to building a cosmic storyline on the big screen as no one has ever done before (besides Star Wars of course, calm down). Now there is one point though, which has been mentioned on InvestComics a few times, what about failure? What happens WHEN, not IF, When a Marvel Studios movie does not meet expectations at the box office? This will in fact happen, it’s inevitable. It will be very interesting to see how Disney reacts to the bad box office draw. One thing is for certain however, the comic book market will be affected to a degree. The prices will drop back into place where they probably should be and level off. The constant influx of various movies and television show announcements are driving prices batty for quite some time now. THIS will be the crash, NOT the variants, 3D covers, etc. The hyperbole will drive pricing back to reality if expectations are not met in the mainstream. Would you pay $10,000 for a Walking Dead CGC 9.9? Yes someone did. THAT is what you call a bad investment. $10,000 on a first appearance 9.9 of Green Goblin, Lois Lane, or even Wolverine makes sense. These characters are household names. Walking Dead is a hot zombie television show right now. It will eventually run its course and no longer be hot anymore. Granted, good story, good show, but its zombies….that’s it. Yes anyone can say “it’s about the character development and how we follow them” but in actuality, no zombies, no show. Not bashing the show, giving a dose of speculation reality here. Spending $10,000 on the number one issue is a bit of an oversight on that buyers part, but maybe, just maybe I’ll be wrong on this.

So back to Nova, as explained Marvel Studios will take the leap into space. It’s a risky one with Guardians because no one really knows of them. Rocket Raccoon will be the star in this one, so it’s best you stock up on him. Anyway, Nova has been mentioned in passing by Marvel and through some rumors. If Marvel is reaching out into the space universe, what’s not to think Nova won’t be a part of that? Same with Warlock, Silver Surfer, Death, and maybe Rom! Remember him? How cool would that be to have a Rom movie? Yes wrestling with that toy company can get dicey, but what Disney wants, Disney gets. What it all boils down to is making sure as a speculator that you have all of your Cosmic ducks in a row. Pick up the rare first appearance, those odd number one issues, the status quo change books, and the rare Thanos variants. It will pay dividends down the line IF the Guardians of the Galaxy movie does well. Nova (2013 5th Series) #10 will play pretend and solict this comic as the 100th issue. Gotta love the restarts, five of them for Nova to be exact here. The comic will come with all sorts of variants. The prize variant will be the JG Jones Incentive. A $60 book that can see some decent gains if handled properly. Nova #10 will star the NEW New Warriors (another potential space team down the road). Check out the first appearance of the New Warriors (“old team”) in Thor #411 (1989). A must own.

We like intros don’t we? Of course we do! Ultimate Spider-Man (2012 Marvel Universe) #20 will introduce a new villain named Whirlwind, so check that out. Kick-Ass 3 (2013 Marvel) #5 will do some introducing themselves with a new villain team. Infinity Hunt (2013) #4 plants the seeds of Marvel’s next major event. Are we tired yet of these major events? And speaking of Infinity, Infinity (2013 Marvel) #6 will conclude with an oversized issue as Thanos fights everyone! And incidentally, Iron Man #55 is Still a must buy. Avengers Assemble (2012) #21 hints at the team Inhumans. The Inhumans are about to have a breakout year next year. Get on top of Fantastic Four #45 (1965) for the first appearance of the Inhumans. Staying on topic with the Avengers, Avengers Arena (2012) #18 will see its final issue this week. With more death and a launching pad for something else. Something major will be happening in All New X-Men (2012) #19 so be sure to glance through that book. Damian Son of Batman (2013) #2 is sold out for the most part on the retail level. The variants are completely sold out. The Andy Kubert black and white variant would be a nice CGC sig series flip book. Forever Evil Argus (2013) #2 will highlight Deathstroke. One of the baddest dudes in the DC Universe. If you’re a regular reader of this column each week, you already know that InvestComics is a huge Deathstroke supporter. I have always felt that the Deathstroke character is on the cusp of some serious play, but DC doesn’t know exactly what to do with him (i.e. Nightwing). Yes they finally put him on television (sparingly), but that’s not enough. Get this guy going already. Bigger role on the show, movie appearances, chop chop DC! A huge recommendation throughout the years on InvestComics has been The New Teen Titans #2 (1980) and it will continue to be in BUY mode with InvestComics. And for those keeping score at home, Forever Evil Argus #2 variant is sold out, which means absolutely nothing on the speculator side of things. Geoff Johns will be hitting all out on Aquaman (2011 5th Series) #25. The conclusion to the “Death of a King” storyline. The new Superior Spider-Man event begins this week; The Darkest Hour in Superior Spider-Man (2012) #22. Venom will have his first run in with Superior Spidey in this issue. This should be very interesting. In the “in case you missed it” department, DC will release Sandman Overture (2013) Special Edition #1. The issue will feature a bunch of useless extras if you’re interested.

IDW will bring back a cult favorite in Sam Keith’s Maxx Maxximized (2013 IDW) #1. A collector can buy the first appearance of Maxx in the overprinted Darker Image #1 (1993). 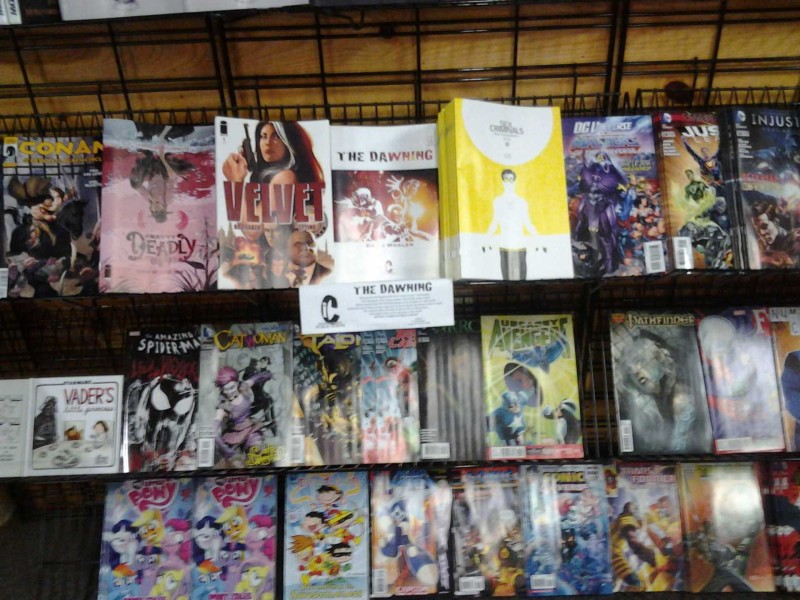