InvestComics Hot Picks on Monday? First time in a long time this has happened! The announcement of the ICHP’s not making it appeared on the InvestComics Facebook page, so be sure to like that page so you don’t miss anything!

The InvestComics Hot Picks article may not make it every Sunday for a little bit. It may happen more often than not these days because life has a way of throwing curve balls our way, so we adjust. No matter what though, the InvestComics Hot Picks will find its way to your desktop before Wednesday! Thanks for your continued support as always. And thank you for your patience!

….11 more days till Christmas and the Star Wars #1 (Dark Horse) 9.8 CGC Signature Series signed by Brian Wood giveaway is a bit out of reach right now (we’re at 1659). InvestComics along with Ratchet City Comics are offering up a chance to win the aforementioned comic, but the IC Facebook page needs to reach 3000 in order for the giveaway to happen on Christmas. If you help us get to 3000, you may win the awesome giveaway. So share the love. A miracle waits! Get all the details right HERE. 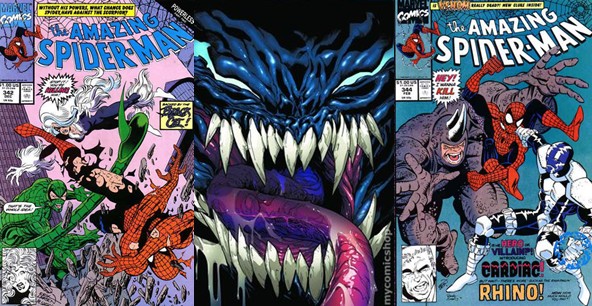 If you were a comic book fan back in the 90’s you will remember the fun that followed the Todd McFarlane Amazing Spider-Man run. A fellow by the name of Erik Larsen took over the reins for a while and the ride was just as superb a ride as from McFarlane. So many characters introduced and one of which will be returning this week in Superior Spider-Man (2012) #24. Check out Cardiac in his first appearance by the stellar Mr. Larsen in Amazing Spider-Man #344(1990). Before Cardiac was his villainy self he was Dr. Wortham in Amazing Spider-Man #342(1989). Fun times those 80’s/90’s Spidey runs were. Fun times…….So in closing, with the recent Spider-Man 2 trailer coming out, it’s a safe bet to think we will see more Spidey coming our way. Actually it’s a sure bet, Sony pictures said so. The question remains. Who is to get the tap on the shoulder to get in there next? No one knows, but maybe, just maybe Cardiac will be answering that call. You never know!

A return appearance and an end for a Spider-Man book this week. Check out the last issue of Scarlet Spider (2012 2nd Series) #25 as many questions are answered with some surprises as well.

The new Lobo shows up in the latest Supergirl book. Check out Supergirl (2011 5th Series) #26 for that. If you are one that pines for the old Lobo, don’t forget that his first appearance is in a very affordable comic; Omega Men #3 (1983).

Batman and Robin (2011 2nd Series) #26 will give readers the retelling (new 52 style) of Two-Face’s origin. Batman’s foe first appeared in Detective Comics #66 (1942). He’s a great villain, but doesn’t deserve the cash that some dealers/sellers ask, but they’ll get it nonetheless. Staying with the Batman theme here. The successful Harley Quinn #0 leads into Harley Quinn (2013) #1 this week. Expect sellouts on this one. Harley is a popular one……for now. Do not put all of your eggs in one basket here. Harley is a cool character, but she will not sustain an uptick in the long run. That said, the Adam Hughes variant looks like a sold out book with nice profit potential there. Signature Series would be a nice way to go with this one. As always, high grade too!

X-Men (2013) 3rd Series #8 will feature the debut on Monet. It’s always nice to catch a first appearance in an X-Men book, so be sure to check this out.

A recent fan of InvestComics reached out to thank me for some Hot Pick advise. InvestComics recommend Voice in the Dark #1 (sold out, second print already printed) as he flipped the comic for $12. This Wednesday Voice in the Dark (2013 Image) #2 will hit the shelves. What will this comic bring? The speculator always has to be careful with the second issue. The number two issue (and 3) are essentially the most vital in a series as far as the speculation market goes. Why is that? The follow-up issue to a number one issue must be met with the same interest as the first or the series will fall flat in the aftermarket. Word of mouth will get around as a YEA or Nay on this series after Wednesday. You must keep a pulse on what the fans are saying as well as the aftermarket. Being on time is another huge factor, but we’re talking about interest in storyline here right now. The story has to captivate the interest of the fan in the second issue. If it does not, the aftermarket is nil. 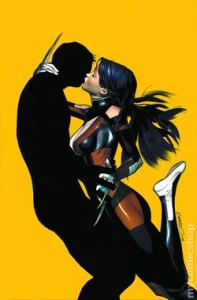 Rounding out this week we see the cover to All New X-Men (2012) #20. Every so often I link fans back to the InvestComics special I ran over a year ago called Romantic X-Men Images. It’s a collection of X-Men covers that depict various X-Men team members in the act of public displays of affection. Why this particular team has so many covers like this is a bit mind boggling really. So I will add the cover of All New X-Men #20 to this collection of Romantic X-Men Covers. If you missed the original article with the covers, click HERE.

Thanks again for your patience everyone. See you next week!