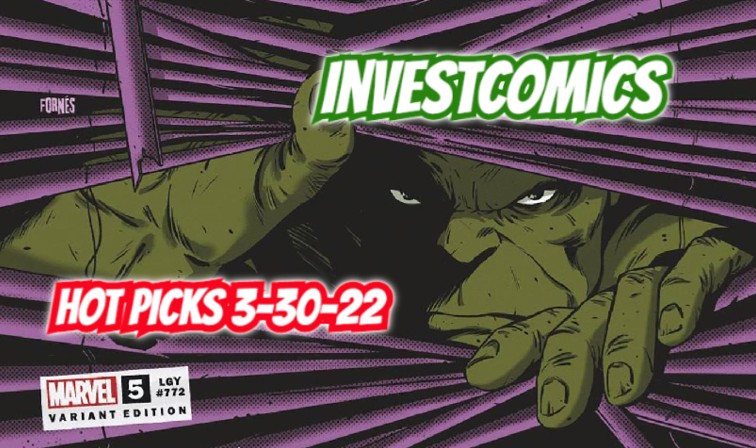 Here are this week’s top Trending/Spec Comics out this Wednesday 3-30-22.
Please note: All new comic releases can and will change release dates from time to time. Check with your local comic shop on the guarantee of arrival time. If ordering from eBay, check with the seller or post details.
Like something we’re talking about? Like a cover? Like the debut of a new series? A first appearance?
Click on ALL Red-Highlighted LINKS/Comic Covers to BUY/BID from ALL available eBay sellers now (always buy from high-rated eBay sellers).

Amazing Spider-Man #93 – It’s been a long time coming, as so it seems, but the Spider-Man “Beyond” storyline will finally wrap up this week. It’ll be Spider-Man vs. Spider-Man. Who will win? Let’s all read together and find out if any surprises are in store. Hopefully a jaw-dropper, that’ll be so good.
Hulk #5 – When Marvel announced that superstar writer Donny Cates was kicking off a new Hulk series, fanboys knew they were in for a treat. Especially the expert speculators too. Both parties felt the presence of a fun, out-of-this-world story and speculation monies with Mr. Cates on board. Donny has yet to disappoint either. Now, there are the haters, the ones that want to smash anything certain comic creators touch. Look up Rob Liefeld, John Byrne, Mark Waid, Dan Slott, etc. Getting away from the negative, we can say, without a doubt, Donny Cates is making Marvel Comics money with this title. So, he’s doing something right. You see, people do the same to InvestComics for years and years. They claim not to like us, talk a bunch of lies and bulls*t, and continue to come here every week to check us out. It’s those people who are conflicted in their own minds about following a bs lead into a narrative that simply doesn’t exist in their own mindset, but is compelled by everyone else instead of being honest with themselves. Don’t like something because you truly do not care for it, not because your man-crush on some comic thread doesn’t. Formulate a valid opinion that’s your own. If you actually LIKE something from Donny Cates, then f*****g LIKE it. And if you HAVE read a slue of comics and are just not feeling the author, then he/she is not for you. No reason to bash him/her. Zero reasons. Don’t dig it, move along.
Now, back to the Hulk. Donny Cates teased readers (speculators) before the release of the first Hulk issue that a major new “Knull” like villain will be coming within his Hulk run. Knull-Hulk as some are saying, but the real name is Titan. Titan made a brief appearance Hulk #3. That issue has been doomed by the “cameo” sticker. No one really cares about that comic. The Hulk #6 issue, will be the hot one. The first official “FULL Appearance” of Titan. Now, since Hulk #3 already received the dreaded “cameo” label, what will (might) this Wednesday’s Hulk #5 receive when (IF) Titan appears on the last full-page screaming, “I AM TITAN!” Of course, the grading companies will dictate what we all see with our own eyes. That’ll be the “second cameo.” Laughable really. The character will scream his name (maybe/probably) and it’ll still be a cameo. Okay. The foundation for Hulk #6 as the official first appearance has been laid down. The amount of variant covers is also laughable. It’s on a ridiculous level at this point. The real reason for all of the variants? It’s for all of the speculators who originally missed out on the first Knull appearance. Marvel knows, just like the card companies know, who is truly buying most of their product. Here is the thing guys/gals, don’t spend an exorbitant amount in the aftermarket that’s readily available to everyone with prints (variants) upon prints (variants) out there. What you can do, is grab a Hulk #6 NOW at a price point between $7.99 – $99 and then possibly flip it when the market goes unnecessarily bonkers. Will this Titan villain be Donny Cates’ second Knull craze? Maybe, but the Knull villain evolved into a story all on its own. The popularity grew larger in time. The Titan (Hulk-Knull) is an expected arrival. So, who knows where this all goes.
Shadow War Alpha #1 – Bat and Robin must hunt down and bring justice to the deadliest assassin of all, Deathstroke. There isn’t much else to say here. This will be an amazingly fun story/crossover event. Hell to the yes. Written by Joshua Williamson and drawn by Viktor Bogdanovic.
Captain Marvel #37 – New storyline begins here. The main focal point here will be the new character of Binary-Captain Marvel. The Marvel marketing team says it’s a fantastic jumping-on point for new readers. So, chop-chop, get on it.

Immortal X-Men #1 – New X-Men series from writer Ben Percy and artist Federico Vincentini. Cover shown here by Adam Kubert is sweet.
Batman Faze Clan #1 – The comic book industry has a knack for teaming up with various franchises or social media influences with little to no fanfare given back. It’s an odd thing. Yes, some franchises work out, but most social media influence team-ups do not. The social media team-ups are usually of those who have millions of followers, yet the comic they appear in do squat. Will the “Faze Clan” teaming with Batman this week become the breakthrough the influencers and comic companies are waiting for? The Faze Clan are a bunch of dudes that play video games and have figured out how to successfully make money using social media. They have 8.6 million YouTube subscribers, so how exactly does this comic NOT blow up? Previous influencers that have teamed with comic companies, their millions of viewers were not impressed or had zero interest in their comic book. So, one or two or three things are happening here. One, the social media influencer is not as popular as one may think/see. Two, The said comic company AND influencer do an extremely poor marketing campaign OR none at all. Three, No one cares. It’s all very odd how these Faze Clan dudes have a YouTube following of almost 9 million and this comic may fall flat on its proverbial face. Sh**, InvestComics should be teaming with someone then. We KNOW we would market the hell out of it.
Hulk Grand Design Monster! #1 – Artist/writer Peach Momoko found success reinventing the X-Men with her own visionary take. Marvel will go back to the wheelhouse with writer/artist Jim Rugg. This time with the Hulk.
Quintara Stone #1 – New series from Keenspot Entertainment.
Head Set #1 – An all-ages, 68 pager from Binge Books.