Before jumping in, InvestComics Publications will be releasing The Dawning #3 this week. Issue numbers 1 & 2 are still available to order. You will be able to order issues 1 & 2 on the same page as number 3 when the the issue becomes available on InvestComics. So look for the release on the InvestComics website and the IC social media as well.

Speculators will find a very short week regarding their Hot Picks, but for every short week there is a big one around the corner. With a week like this it’s always good to catch up on some back issues or fillers for your collection. 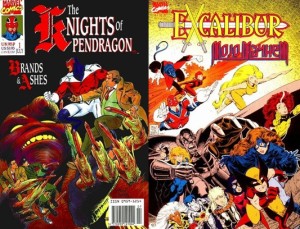 The UK Marvel Universe is making its move. Like I said in a previous Hot Picks article, Marvel/Disney is essentially feeling out the UK market to see if it’s worth exploring further (cinema). Of course this is complete speculation, but do know that Disney never does anything for the sake of just “doing it”. I personally think it will happen. Captain Britain, Union Jack or somebody will get the nod eventually to appear in a movie or cartoon down the road. This weeks UK Marvel addition to the shelf will be Revolutionary War Knights Of Pendragon #1, with Union Jack and Dai Thomas getting their names in the solicit spotlight. And their first appearances pan out like this; Union Jack in Invaders #7 (1976) and Dai Thomas in Marvel Preview #3 (1975). The Invaders #5 is without a shadow of a doubt the book to own here. Not only do you get a first appearance in a Roy Thomas story, but a Jack “King” Kirby cover? Yes indeed, a comic to buy and hold onto once the UK Marvel Universe hits the scene in a big way someday. The Knights of Pendragon team first appeared in the Excalibur one shot: Mojo Mayhem (1989) as the Weird Happenings Organization. They then appeared in their own self titled comic; Knights of Pendragon #1 (1990) which lasted only 18 issues.

Oh yes, have I mentioned that the Revolutionary War Knights Of Pendragon #1 is basically sold out? Something might be brewing in the UK Marvel world, and as always you heard it here first!

Sticking on topic with our friends overseas, UK’s biggest vigilante hero ever gets a new (sold out) release this week: Dredd Underbelly Movie Sequel (2014) #0. If you don’t own Dredd’s first appearance in 2000 AD #2 (1977), you should. Judge Dredd is the UK’s Spider-Man/Superman. He’s their biggest character ever. Good luck getting a near mint copy of this newspaper print though.

Marvel’s Miracleman will continue to do well with the release of Miracleman (2014) #2 this week. It’s sold out on all levels, but be wary here. Do not get caught up in the vortex, you will lose money on this if you’re not a keen speculator. While Miracleman is a great character, he will not sustain his ability in the aftermarket. The old Eclipse Comics and comics before that will hold up, not the new issues. That said, there is money to made in the current market still. Check out the Alan Davis Miracleman #2 sketch variant to maximize your dollar here. It’s a $60 variant, but signed and graded (9.8 or higher) will get you a nice payback.

Guardians of the Galaxy (2013 3rd Series) #11.1 will present the first meeting between The Guardians and the X-Men. Very cool. A $60 Dale Keown sketch variant is even cooler! You may want to get this signed and graded, then go into a hold pattern the closer the movie gets.

A few number one sold out comics to check out this week; Furious (2014 Dark Horse) #1 looks like an all out, very cool super-hero comic brought to you by Mice Templar writer Bryan J.L. Glass. Bravest Warriors (2012) Annual #1 and Adventure Time Special (2014) #1 finish out the week.

If you like the weekly picks here and you have done well in your aftermarket selling, don’t be shy to hit the donate button below! It helps the upkeep of things around here. Thanks for your contribution!