BIG contest going on!! Check out the InvestComics Instagram to see! WIN a George Perez SIGNED Tales of the Teen Titans #44!! That’s right, the first appearance of Nightwing, signed by George Perez!

Nothing really jumping out this week, but here are some comics to check out…..

With Iron Fist coming onboard to the television medium, what would one expect to see more of these days leading up to the Iron Fist Netflix T.V. series? More karate/kung fu comics right? Okay so Marvel will provide that beginning this week with Deadly Hands of Kung Fu (2014) #1. The hand to hand combat comics will make their official return this week and continue as long as the demand is there. There is a good chance that Deadly Hands will be sold out in a couple of weeks. The comic that the speculator really should have in their hands is Special Marvel Edition #15 (1973). This comic features the first appearance of Shang-Chi. Written by Steve Englehart, with cover and art by Jim Starlin. Yes this would be a nice edition to have in your back issue stash. 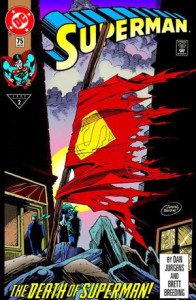 Superman vs Doomsday. Haven’t we been down this path once before? The end result did not fare well for Clark, but it fared very well with the media and collectors at the time. Rumor has it that Supes may bite the dust again. Isn’t this suppose to be the “New 52?” Why are we getting old stories like this one revamped? Aren’t there new stories to possibly explore instead of going back to the well so much?  “NEW 52″……NEW. Okay. So with DC’s big hoopla of Superman vs. Doomsday in Superman Doomed (2014) #1, the comic that will probably be a bigger draw in the aftermarket (if there even is one for this) will be Superman Wonder Woman (2013) #8. This will be the continuation of the Superman Doomed #1 book. Maybe not as many printed Superman Wonder Woman #8’s as there will be Superman Doomed #1? Who knows? All and all, it will interesting to see what spin they put on this story this time. Buy this comic at your local shop and relive history with a new twist.

Justice League United (2014) #1 seems to have a lot of copies sitting at the distributor. What gives with that? A fantastic story will bring readers and collectors right on board though!

Captain Marvel (2014 8th Series) #3 will see our hero team up with the Guardians of the Galaxy. Expect to see GOTG everywhere (as they slowly have been) before they hit the screen. Speaking of Captain’s, Captain America (2012 7th Series) #20 will see Steve Rogers’ life change forever! Hasn’t he been through enough?

United States of Murder Inc (2014) #1 has television series or movie written all over it. Pick this comic up and hold on to it. You should be hearing news on this comic sooner than later……if it never comes to fruition so what. A great read will probably be ahead.

Legend John Byrne has a sold out book arriving this Wednesday. Star Trek New Visions Mirror Cracked (2014) #1 will have availability only on the shelf that you see. No mas after that spot is empty. John Byrne first tackled the Star Trek genre in 2008’s Star Trek: Alien Spotlight: Romulans (no number on cover). That too was with IDW Publishing.

Rogue Trooper Classics (2014 IDW) #1 will focus on the debut of Rogue Trooper. Why not just get the first appearance in 2000 AD #228 (1981) if you can find it. If the demand ever drums up for the UK hero’s (as InvestComics has said it will) then maybe this should be one to have in your portfolio.