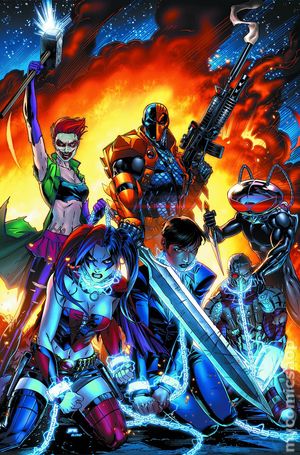 Not that many pick-ups in the way of the spec market this week, but as always still plenty of great reads too.

There are a sufficient amount of Grayson (2014 DC) #1 still available at the distributor, a bit surprising. The comic will probably fair well as the series progresses. The new series will follow Dick Grayson as an agent from Spyral. The Spyral group first appeared in Batman Incorporated #4 (2011). A pricey $75 variant by Phil Jimenez accompanies the new release.

Another comic this week with a few copies still in the warehouse is Spider-Man 2099 (2014)#1. And another surprise here? Maybe not so much so. Marvel has been beating the relaunch Spidey comics a bit much these days. That’s not to say a speculator cannot flip the books to make some cash, but the mere fact that there are still copies of this issue available for reorder is saying something. It’s a number one Spidey book, it should have a sold out sign on the shelf. If you want to make any sort of headway here, you’ll probably have to get the Midtown Comics J.G. Jones variant for $10. Maybe flip it raw. Getting a signature and a grade is probably the way to go here if you want to make a few dollars more. Don’t expect too much here. Speaking of Spider-Man, 100th Anniversary Special Spider-Man (2014) #1 continues the first look at the new villain Clash.

One more thing here about Spider-Man 2099. If you’d like to find his first appearance or any Spider-Man first appearance you really should check out a few checklists I put together a while ago here on InvestComics. The latest one was the Spider-Verse checklist. This article is a hot commodity and will become even hotter once the Spider-Verse comics start spinning in different series. Check out that article right HERE. There is also a Spider-Man movie checklist part 1 & 2. Those are extremely handy for those seeking out every important Spider-Man book possible. Part 1 HERE and Part 2 HERE.

A bit of a head scratcher this week with this one here. New Suicide Squad (2014) #1 looks, feels, and should be a sold out comic. The Joker’s Daughter, Deathstroke, and Harley Quinn make up two-thirds of this awesome team. How is this comic not sold out? A $15 Ivan Reis variant would certainly be a smart pick up here. The momentum may catch on after a couple of issues. Or maybe it’ll catch on sooner than that. Either way, the New Suicide Squad is an awesome team. Fans will come around….

Spread (2014 Image) #1 is sold out and is a must get this week and a head scratching sold out Grimm Fairy Tales Swimsuit Special (2010) #2014 makes for great eye candy….that’s about it. Zenescope Entertainment does have a sold out comic this week that doesn’t give that eyebrow raise; Realm Knights Age of Darkness (2014) #1. Plenty of copies left from Images’ Death Vigil (2014 Image) #1 and Waste Of Time #1 from Northwest Press is just about sold out.