Superstar artist Jim Lee is back on a Batman book. Batman Europa #1 will be a four part mini-series featuring top talent in the industry. Written by Matteo Casali and Brian Azzarello. This four part series will be a great read as well as getting your eye candy. What more can a comic fan ask for here? Batman vs Joker by premiere creators, Azzarello, Lee, and more? Yes this is a no-brainer.

Let’s not forget what Jim Lee brought to the table back in 2002/2003 with his iconic Batman run starting with Batman #608 and also creating one of the most iconic Batman/Superman comic covers of all time; Batman #612. He did previous Batman books before those though. And if you’re a Jim Lee fan, you must check out the extensive InvestComics Jim Lee Creator Spotlight checklist right HERE. You’ll find some great Jim Lee books there.

A new DC/Vertigo title to check out; Red Thorn #1.

The speculator will have to be on alert this Wednesday for the new Image comic Huck #1. With Mark Millar writing, it is not inconceivable to think that a movie studio will come knocking and before you know it, Huck is announced as a possible movie project. This happens quite often in the Millar camp. The artwork will be done by superstar Rafael Albuquerque. A very simple story here about a man (Huck) with superpowers (assuming) does something nice everyday, but his neighbors keep his good deeds hush-hush, until one day…..! The Image solicit is pushing this comic as something fans have never seen before and will love it. (*knock knock knock) Get the door, we think Universal Studios is knocking.

Although Marvel’s Black Knight character has had several first appearance as different alias, Dane Whitman would be the one with the most credits. First appearing in Avengers #47 (1967), Black Knight will appear this Wednesday in his own series Black Knight #1 starring as……you guessed it, Dane Whitman. The new series will be written by Frank Tieri. Here’s something to ponder. Marvel (Disney) has yet to even tease anything regarding the “knights” genre. Not even remotely, nothing, zilch, nada. If EVER, Dane Whitman will be tapped as the lead character. He’s been a main staple with the Marvel Universe a long time and he’s been in a ton of Avengers books. Yes indeed, a ponder and a speculative nugget. You’re welcome.

Only three issues in and some silliness has crept into Captain America Sam Wilson #3. This issue features the return of Capwolf. Yes that’s correct, Capwolf. Maybe writer Nick Spencer makes this work, who knows? If you feel captivated by the notion of the Capwolf character, you can get his first appearance in Captain America #405 (1992).

Is there any reason to be excited about The Mighty Thor #1? We all know Jane Foster is Thor. Now we simply don’t care anymore, the climax is over. We’ve been dealt the cards, we saw what we have and we folded. We’re done here. Do we need to carry on the nonsense of having Thor as a female character now? We say, not for long. The whole idea that Jane is battling cancer and losing is a very sad thing. She’s a beloved character, but this may give Marvel the “out” in order to bring back the Thor we all know and love. If sales don’t meet expectations, which we don’t think they will, then Jane will eventually die and Thor will come back. Ms. Marvel #1 on the other hand has more upside if there were to be a side by side longevity comparison. Stronger character traits (not history) and overall more appeal.

At first glance, New Avengers #3 looks as though Superman is on the cover! It’s a bird, it’s a plane, no it’s a Marvel comic!

Sticking with the perplexed department here, what in God’s green earth is Secret Wars Too #1 about?

Marvel will give Spider-Woman another go; Spider-Woman #1. The longest lasting series for Spider-Woman ever was 50 issues. Her second longest? 18 issues. So lets all hope (no pun intended) writer Dennis Hopeless gets the ship right a bit this time. Starting off things with a pregnant Jessica Drew on just about all the covers. That in itself feels a bit odd no? Here’s hoping she has an easier labor than the series will.

Marvel is about to turn the entire Star Wars comic franchise on its proverbial head. Star Wars Vader Down #1 will be the first ever Star Wars crossover event ever. It’s going to be awesome, make sure you’re a part of this. Over on the InvestComics Facebook page, there have been 3 contest already giving away the Wonderworld Comics variant. Thanks to those guys/gals for giving us such a great book to give away to lucky fans! Check out the two variants we’re giving away right now below. Make sure to visit Wonderworld Comics to buy your copy! 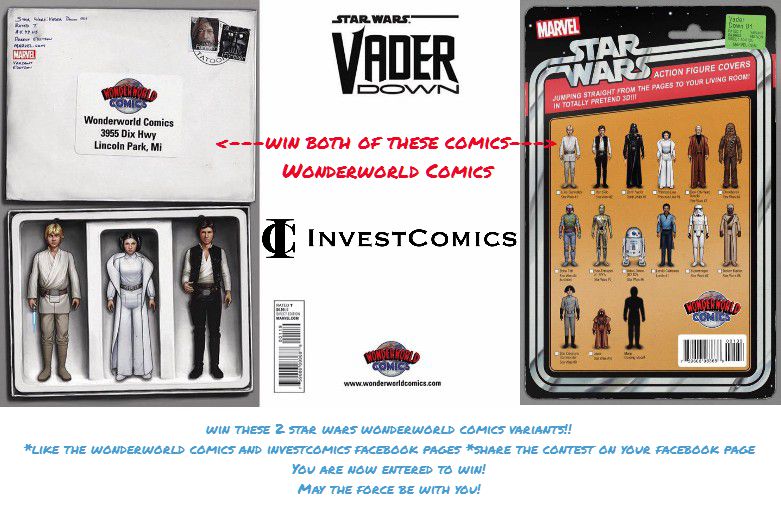 Captain Canuck is killing it with each issue. This Wednesday will be no exception with Captain Canuck #5 focusing on bad as* Kebec. She was introduced back in issue #0. Read Captain Canuck or you’re missing out.

More comics to check out this week; Cops For Criminals #1 (Legendary Comics), written by Steven Grant, and Star-Lord #1.

Valiant continues their torrid pace in storybook writing this week with Bloodshot Reborn #8 and debut issue Wraith Of The Eternal Warriors #1. Valiant Entertainment is turning it up a notch, so should you. Read them.