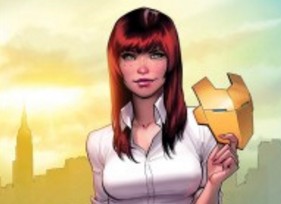 Green Lantern #47 will feature the villain Sonar. The very first appearance of Sonar came way back in 1962’s Green Lantern #14. Gil Kane pencils. A couple of very odd things with the variant here. First off, it has Harley Quinn on the cover. Is she even in this comic? Is DC that desperate to sell Green Lantern comics? Second odd thing here. The Lantern variant cover is the same exact variant cover as the new Harley Quinn comic this week; Harley’s Little Black Book #1. Several comic book outlets (retailers) show that this comic variant is the same exact one as the Green Lantern variant, but with the different header (title). What’s up with this? The new bi-monthy Harley comic will be a new team-up book. The first issue will have Harley team up with Wonder Woman. Brought to you by the Harley dynamic duo Jimmy Palmiotti and Amanda Conner. A great book here.

Robin War #1 will be an interesting read. Red Hood, Red Robin, Robins, Batman, Grayson, and the Court of Owls all in one comic? Yes this will be fun.

A new DC/Vertigo title to check out; Sheriff of Babylon #1.

Out of all the new number one Marvel comics coming this Wednesday, there is one with the most potential to hit the right cord with fans and that comic is Daredevil #1. Written by Charles Soule and art from Ron Garney, the new Daredevil series will see some nice gains. The Joe Quesada variant is awesome. The other number one issues from Marvel are All-New Inhumans #1, All-New X-Men #1, and Guardians Of Infinity #1.

The hottest book this week will probably be Howard The Duck #2. Yes Howard cracked the InvestComics Hot Picks a few weeks ago for the same exact reason it will this week, the culprit is…..Gwenpool. She appears in issue two and the incentive Tom Fowler variant cover is sold out. Good luck getting your paws on that one right away at a decent price.

Check out the new Invincible Iron Man #4 comic. It may have a new villain appearance, but there’s also that appearance from Mary Jane and her gracing both the regular and variant covers. It’s a nice change of pace actually to see Mary Jane out of the Spidey element in a different comic altogether (on the covers no less too). Both Iron Man covers are awesome and need your attention.

So a new Ultimate Spider-Man comic will debut this week. It’s called Spidey #1. Same premise as the Ultimate title, focusing on a younger Peter and his early years as Spider-Man.

The silliest comic book title of the year has to go to Marvel’s Totally Awesome Hulk #1. Marvel’s feeble attempt at being “hip” is about 16 years too late. When was the last time you heard anyone utter the words “Totally awesome” within the context of describing a person. “Totally Awesome mom”? “Totally Awesome Greg”? “Totally Awesome boss”? See what we’re getting at here? The title falls flat on its face. Thank goodness there are a couple of super talents on this comic to give it worth a look. Greg Pak (Planet Hulk, Skaar, World War Hulk, etc) will write and the totally awesome Frank Cho will be on art duties. See what we did there? Anyways, the series may do okay (don’t foresee a long run here), but expect a title change eventually because that’s just plan silly. “Hello? Yes yes okay, hey Marvel, the 90’s are calling and want their title back”.

451 Media Group seems to sell out of a book every week. A few weeks ago we gave you a heads up on Sunflower #1 and that sold out. Now it looks like Sunflower #2 will follow that lead.

A couple of new comics from Action Lab Entertainment this Wednesday, Actionverse #0 and Bigfoot Sword Of The Earthman #1.

After-Shock Comics will start arriving to a comic shop near you this Wednesday. Check out Replica #1 from writer Paul Jenkins and artist Andy Clarke. After-Shock Comics has some major talents coming on board to deliver some in your face stories and great art. Here’s the very first offering from a new comic book publishing company.

By now comic collectors realize that if Black Mask Comics puts out a new number one issue, you buy it. The comic to get this week is X’ed #1.

Gryphon Knights releases Millennials You Are Special #1. The villains for this first issue? The Debt Collectors. This comic sounds like fun!

Two number one comics from Overground Comics to check out, Absent Captain #1 and Graduate #1.

Carver A Paris Story #1 (Z3 Comics) will be co-written by Paul Pope.

A new number one comic from Dark Horse, Mystery Girl #1.