This week’s IC 100 Club Pick is Capes #1 (Image Comics 2003). By now just about everyone knows what this comic holds. Especially Walking Dead fans. For those of you who don’t know, here it is. The Walking Dead #1 comic came out in October of 2003. Capes #1 came out one month prior. In the Capes #1 comic contained a 5 page preview of The Walking Dead #1. So in essences, the first Walking Dead to ever see print was Capes #1, not The Walking Dead #1. So what does this mean exactly? Well not much to the collectors (slab/graders) market because it’s not recognized as THE first appearance of this title. Why is that you ask? No idea. Sometimes the grading companies are very funny with what is what, but the truth and fact is that The Walking Dead comic first appeared in Cape #1, regardless if it was only 5 pages. It predates the first issue, end of story. It’s not an image, a teaser, a blurb, a mention, an ad, no it’s the actual first five pages of The Walking Dead before the number one issue came out. So with that, if you’re a true Walking Dead fan and think you may want a collectible, this is it. $100 and free shipping.

InvestComics already covered the comic we’re about to write about for speculators on the InvestComics Facebook page a while ago, but we’ll go over it here for those who missed any of it. Marvel releases Deadpool Mercs For Money #1 this Wednesday. In this new series fans will get look at the team made up of; Foolkiller, Stingray, Solo, Massacre, Terror, and Slapstick. ALL of these characters have the potential of blowing up. Deadpool can jump-start any one of these characters to a new life. Maybe their new journey starts here? Maybe not, but all of these characters’ first appearances are very affordable, so why wouldn’t a speculator take a chance here and buy some cool comics at affordable pricing? Great stories and potential hot commodities await you. Read comics……Invest wisely!

Let’s start with the team itself. The Mercs for Money all appeared together for the first time in Deadpool Vol 4 #1 (2015).

Foolkiller’s very first appearance was in Man-Thing #3 (1974). Although an awesome book, we look to the third Foolkiller character because that’s the one on this particular team. Kurt Gerhardt (Foolkiller 3) first appeared in Foolkiller #1 (1990). This Foolkiller 10 issue series was hot for a minute, but then no more. These days however, if he catches on, no telling what could happen. The same goes for all of these second rate comic characters.
The character Terror first appeared in the 1941, used very sparingly, but we’re going to fast forward a bit to 1988 to St. George #2 from Epic Comics (Marvel Comics imprint). Here we have the Terror character being used in today’s modern era. An obscure odd title you’d probably be hard pressed to find, but a book needed in your collection. The great Klaus Janson pencils this first appearance.
Stingray first appearance was in The Sub Mariner #19 (1969). Maybe an appearance in the Sub-Mariner movie if that ever gets off the ground.
Also debuting in a 19th issue was Solo. He first appeared in Web of Spider-Man #19 (1986). Marc Silvestri pencils this issue. This comic is also the debut of Humbug.
Massacre first appeared in The Amazing Spider-Man #655 (2011).
Finally, there is Marvel’s answer to the Joker. His name is Slapstick. His first appearance was in Slapstick #1 (1992). Imagine if Marvel ever made this third rate character into something that rivaled the Joker. Granted, nothing Marvel can ever do to get close to an equivalent Joker type character, but Disney is capable of doing whatever the hell they please, so never doubt them. So any fanboy reading this, relax. We’re not saying Marvel will ever rival the Joker type character, just a fantasy thought process. Speculators should get on this just in case though. Never know!

Spider-Man #1 (volume 2) gets Miles Morales officially into the Marvel universe. A ton of variants accompany the release.
Is Howard the Duck #4 introducing a new character named Scout? The female version? Maybe, check this out and confirm!
Although the Marvel solicit makes it seem as though Emerald Warlock will first appear in Scarlet Witch #3 this Wednesday, he actually first appeared in Uncanny Avengers Annual #1.

Neal Adams lends his legendary status to a bunch of DC variants this week. Here’s a quick list of his incredible covers;
Detective Comics #49, Action Comics #49, Green Lantern #49, and Green Arrow #49. Not only do you get to choose which Neal Adams you like best, but they’re cover price too.
Here’s one to watch out for; Batman Beyond #9 will debut the Splicers to the DC Universe.
The artist with one name; Jock, has a Batman variant cover coming out. Take a look at Batman Europa #4. You like? It’s definitely a Jock cover!

Voracious #1 from Danger Zone is sold out. A fantastic variant from Jason Muhr is still available at the distributor level.
More indies, a completely new whacked out ongoing from Image; Mirror #1. I Mage #1 (Action Lab Entertainment), and Vampblade #1 (Danger Zone).

Our artist friend David Whalen has a new comic out on Comixology and we wanted to share it with our fans. The name of the book is The Dawning (Red King Press). Go directly HERE to buy the comic. Congratulations David on the comic getting onto Comixology. We’ll check it out!

Before we leave, did you see our new Contest/Giveaway? You can WIN Rick and Morty #8 and Rick and Morty #9 Exclusive variants (from Exceed Exclusives). To enter/rules, go right HERE. Giveaway over on Friday February 5th! Good Luck everyone! 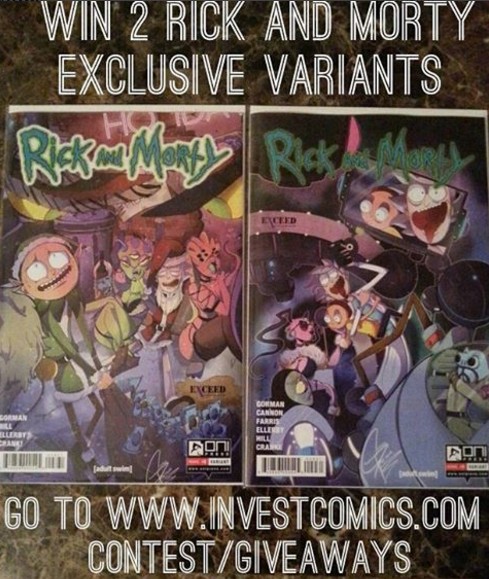