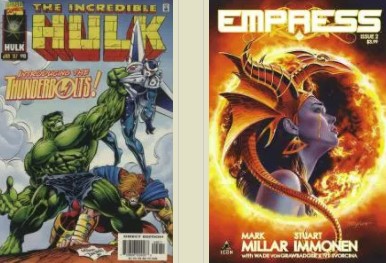 IC 100 Club Pick: Superman #23.1 10.0 (2013). This comic serves as no significance in every day collectors life, but it does have the origin of Bizarro. We do feel that Bizarro will eventually make it to either the big screen or little screen one day, but that’s not really why we have this comic featured here. If you ever wanted to own a perfect gem mint comic book, a 10.0, here is your chance for only $89 and FREE shipping. Not a bad deal for a perfect comic book.

Midnighter #12 has Apollo, Suicide Squad and Midnighter himself squaring off against a dude as powerful as Superman and as smart as Midnighter. His name is Unified and his first appearance was in the previous issue; Midnighter #11.
Neal Adams is killing it with his Superman The Coming Of Supermen comics. And check out the cover to Superman The Coming Of Supermen #4!
Green Arrow #52 features a dead Green Arrow at the hands of Deathstroke. Not really dead, but still makes for some high drama! Fantastic Patrick Zircher cover.
The Super League storyline, part 5, will bring the team Great 10 on board. Check out Batman Superman #32 for that. And just to make sure you have it, Great 10’s first appearance was in 52 #6 back in 2006. Not that many appearances under their belt in ten years. 30 in all maybe?

Batman Beyond fans will have to brace themselves for the major status quo change going down this Wednesday. Get Batman Beyond #12 and find out what the fuss is all about.
In our eye candy store we have Francis Manapul’s Detective Comics #52. This variant rocks.

Dynamite Entertainment is all in with their Kings Quest #1 release. Nine (noine) covers to choose from here. The Chris Ellopoulos cover and the Colton Worley cover are our favorites.
Okay so Dynamite has this interesting comic coming out on Wednesday and it’s going to be extremely interesting to see how it all plays out. The comic is Smosh #1. Smosh is a social media conglomerate. They have 22 million Youtube subscribers and millions more in other social media outlets. They are now releasing their first ever comic book. With social media driving so much marketing around us, will Smosh use this opportunity to benefit in promoting a different medium for themselves? Will they use their media brand to sell comics?  How will all this equate to comic sales?? Something to keep an eye out on if they decide to promote via their vast media audience. Better buy this comic for the rawness of its story, it sounds hysterical, and for the possible sell out due to supply not meeting demand.

Be sure to check out the first appearance of the Symbioids in Contest Of Champions #8. They will be a hit because A: their a new Venom character appearing in a comic book for the first time and B: because they look bad as*.
Marvel releases it’s tenth volume Punisher #1 this week. You probably did the eye roll seeing that the Punisher has another number one comic coming out. What if we told you that THIS time is a bit different? He’s something to chew on. Out of the ten volume number one issues, never did one start with a name like Becky Cloonan. Becky will be the first female writer on the start of a new Punisher series. It will be quite refreshing to get a new take on this character from a female perspective. Becky Cloonan is an all-start and has been around since the beginning of the millennium. She’s no stranger as to how comics are written or drawn for that matter. Punisher #1 this time will truly have a new outlook. One more thing, the amazing Alex Maleev variant is sold out. As is the pointless Captain America Punisher #1 cover by John Cassaday. Nice cover, but we don’t care it’s a celebratory 75th anniversary Cap cover, makes no sense not to have the Punisher on the cover, period.

InvestComics gave readers a heads up on the first ever Gwenpool comic a while back. Fans listened and bought them up. She donned the cover of Deadpool’s Secret Secret Wars #2 (the one we recommended). Now Marvel is re-releasing that particular comic along with other Gwenpool appearances. Gwenpool #0 collects a bunch of Gwenpool stories including her first appearance, but that variant new blood red pool cover (that original comic we recommended), yeah it’s sold out already.
So you want another first appearance on a cover? Sure why not?! How about Spider-Gwen #8 featuring Spider-Gwen Samurai. This variant cover is from John Tyler Christopher. How about Iron Spider-Gwen first appearance? Does that tickle your fancy? She appears on a Spider-Gwen #8 variant as well. We’re not too sure who that cover is from.
Jamal Campbell’s variant Amazing Spider-Man #12 cover is a beauty, wow.

Whenever a Daredevil/Punisher comic comes out, it’s a must get. These two characters make beautiful comics together. Blindspot will join Daredevil in Daredevil Punisher #1 to TRY and take down Frank Castle. Blindspot does not have many appearances since entering the Marvel Universe in All New All Different Point One #1 (2015), his first appearance. Daredevil and the Punisher first met up in that famous/classic Daredevil #181 (1982) comic.
A few months ago Marvel gave us a first ever look at the Mexican Deadpool in Deadpool Masacre #1. It was an all Spanish written book. Now we get the English version of that exact book this Wednesday.

It appears a new Iron Man (Girl) will be making their first full appearance in Invincible Iron Man #9. The female characters have dominated the Marvel landscape these days and much to the delight of fans. It’s working out real well.
Star Wars Poe Dameron #1 introduced some new Star Wars characters. Now we learn more about Captain Terrex in Star Wars Poe Dameron #2.
Marvel’s semi-answer to DC’s Suicide Squad debuts this Wednesday; Thunderbolts #1. It’s the teams third number one issue (third volume). The Thunderbolts have been around (with different members throughout the years) for almost 20 years already. They were first introduced in Incredible Hulk #449 (1997).
Mark Millar’s Empress #2 comes out. We said this with the first issue, as long as this series is on time, it should do well.

Cinema Purgatorio #1 (Avatar Press) will bring together Alan Moore and Kevin O’Neil for the first time since League of Extraordinary Gentlemen. Many times, bringing creators together again after years apart does not always mean magic again. Lets see if the spark happens here.
Deep Space Tragedy #3 (Cosmic Times) cover will pay homage to the Transformers #5. The cover is done by Jamie Jones. The comic is written and drawn by Mike Wagganer.

Valiant Entertainment starts up their epic crossover event 4001 AD #1. A whole mess of variant covers to choose from.
More comics you must check out; Weavers #1 (Boom Studios). Space Battle Lunchtime #1 (Oni Press). Vikings #1 (Titan Comics). We’ve been covering this Henchgirl comic from Scout Comics since the number one issue. Every single issue has sold out at the distributor. Now guess what with the release of Henchgirl #7……sold out. Check out the aftermarket prices on some of these books. They’re doing quite well. Your welcome.